SelbaGondoza Luka arrived in Australia from Malawi with her eight-year-old daughter and a basic grasp on the English language. She came in search of hope and opportunity.

What she didn’t foresee were the challenges – the at times heart-wrenching distress – that awaited her in her new homeland.

Following the loss of her five-month-old daughter after a premature birth in 2001, Ms Luka fell into a deep depression before being admitted into psychiatric care.

Her husband left her, moving back to Africa to marry another woman, and her relationship with her first-born daughter began to strain.

Three months later, she was fired from her job.

Now the founder and chief executive officer of Afri-Aus Care, Ms Luka says she found strength in developing holistic care for other African migrants facing the same sense of displacement. 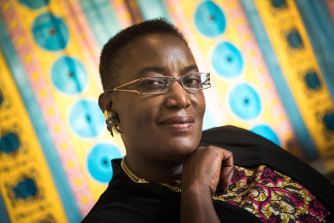 Her not-for-profit support service has never been more in demand as she helps guide mothers on parenting among Australian culture, seeking support for mental health and steering at-risk youth away from a life of gang violence.

“For us African people, having a village to raise a child was not here when we arrived. Finding others to assist has been really hard and that’s why our kids are falling through the cracks,” Ms Luka says.

“But we don’t lose hope, we’re looking for ways to work with the government to help people to walk along the right path.

“To do that you have to think back to what we were doing in our home villages.”

As part of her own recovery, Ms Luka took herself to university to study the very thing that nearly took her life – mental illness. 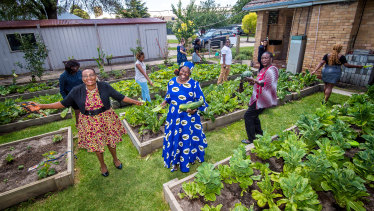 SelbaGondoza Luka, Rita Padang and Veronica Agobong with other community members in the community garden.Credit:Justin McManus

She says during her course she discovered the healing benefits of the Ubuntu framework, an ancient African philosophy focused on social ethics and seeking a common humanity.

An Ubuntu way of life encourages people to value their own identity through their relationship with the community; giving meaning to life with the core values of compassion, solidarity and respect.

As she progressed in her studies, Ms Luka began attending court with the families of young people tangled in the justice system, and launched Afri-Aus Care as a case management program.

But she couldn’t shake the ever-widening generation gap she says she could see forming between many African parents – particularly single mothers – and their children.

“I had postnatal depression after my baby died in my hands and then three months after that I was fired from work. But in Africa we are taught that mental illness is taboo and we don’t talk about it,” she says.

“Here at the centre I see women with husbands who have gone, leaving them raising children by themselves. I can see stories of my past in these women.

“I want to give women opportunities here that they’ve never had.”

And this week the state government answered her rally call, unveiling a $516,000 funding lifeline for the Springvale centre to help expand the Ubuntu mother’s project. 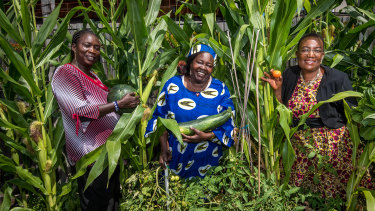 Ms Luka, who was last month named Greater Dandenong’s Citizen of the Year, says the program will help create African leaders and guide mothers on how to balance their often strict parental beliefs with an Australian way of life, while also embodying the benefits of cooking, gardening and sewing.

“Part of strict African family values is having to shout, hit and slap and see your children go without food or new clothes as punishment. What the Ubuntu principals do is encourage parents to discuss the issues from a place of love and compassion, no matter what the child has done,” she says.

“Most of the women here don’t shout anymore, and their kids are coming home.”

A 2020 Melbourne University study into the use of the ancient philosophy found there was an urgent need for culturally responsive framework, using principals such as Ubuntu, to help reintegrate displaced African Australians into society.

”African culture values community rather than an individual way of living. And mothers have a really central role to play in this,” he says. “If mothers are empowered and supported to do more in society … they can support the children in their communities better.“

In the kitchen of Afri-Aus Care’s Springvale centre, with a black leather-bound bible in hand, you can find Narre Warren mother Rita Padang sitting amid the scents of cinnamon and cumin as the smell of home cooking wafts through the air. 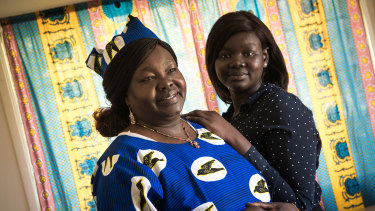 The South Sudanese woman says she used to spend her time walking along train stations and shopping malls, visiting street kids, in a heartfelt attempt to help her community after immigrating to Australia in 2003 from a Kenyan refugee camp where she spent three years trying to survive.

Alongside her daughter Adau Bar, 21, they have embraced the Afri-Aus Care programs and say they have witnessed fractured families healing and bridging the divide between parents and their children.

Teen, 18, Is Fatally Shot at Okla. Party Where People Were Drinking and Playing with Guns