Tokyo: The Olympic Games in Tokyo could be held under a state of emergency as Japan tackles a rise in COVID-19 infections.

Japan’s government is preparing to issue a state of emergency this month in Tokyo and will keep it in place until August 22, after the end of the Olympic Games, Nikkei newspaper has reported. 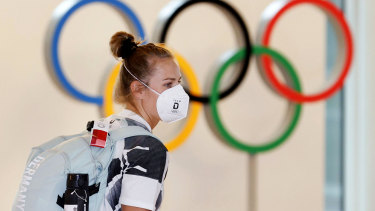 A German Olympic team athlete arrives at Haneda airport in Tokyo on July 1. The Games could be held under a state of emergency as COVID-19 infections rise in the city.Credit:AP

Japan is also considering banning spectators from the Olympics. Medical experts have said for weeks that having no spectators at the Olympics would be the least risky option amid widespread public concern that the Games will fuel new surges of coronavirus infections.

Officials had been wrestling with the question for months but a ruling party setback in a Tokyo assembly election on Sunday, which some allies of Prime Minister Yoshihide Suga attributed to public anger over the Games, had forced their thinking, sources said.

“Politically speaking, having no spectators is now unavoidable,” a ruling party source said.

Tokyo governor Yuriko Koike said on Wednesday that she would continue to prepare for a safe Olympic Games even if the host city was placed under a COVID-19 state of emergency.

Koike told reporters that the central government would take steps on Thursday to strengthen coronavirus restrictions on Tokyo.

Japan has not experienced the kind of explosive COVID-19 outbreaks seen elsewhere, but has had more than 800,000 cases and 14,800 deaths.

Authorities have struggled to stamp out persistent clusters of infections, particularly in and around Tokyo, which reported 920 new cases on Wednesday, the highest since May 13.

A slow vaccine rollout has meant only a quarter of its population has had at least one COVID-19 vaccination shot.

Suga told reporters a decision on virus restrictions would be made on Thursday after talks with health experts. He vowed to respond to Tokyo’s rising cases.

The Sankei daily, citing government sources, said the government was preparing to declare a state of emergency for Tokyo to contain the virus. The Nikkei newspaper later said the new emergency would last until August 22.

The Games begin on July 23 and end on August 8.

Employers will pay a quarter of furloughed staff's wages from August

Cyber-spies defended Britain from 723 online attacks over a year