Thousands are attending a demonstration in central London, as Jeremy Corbyn's hard-left Momentum are set to come and confront them on a separate protest. 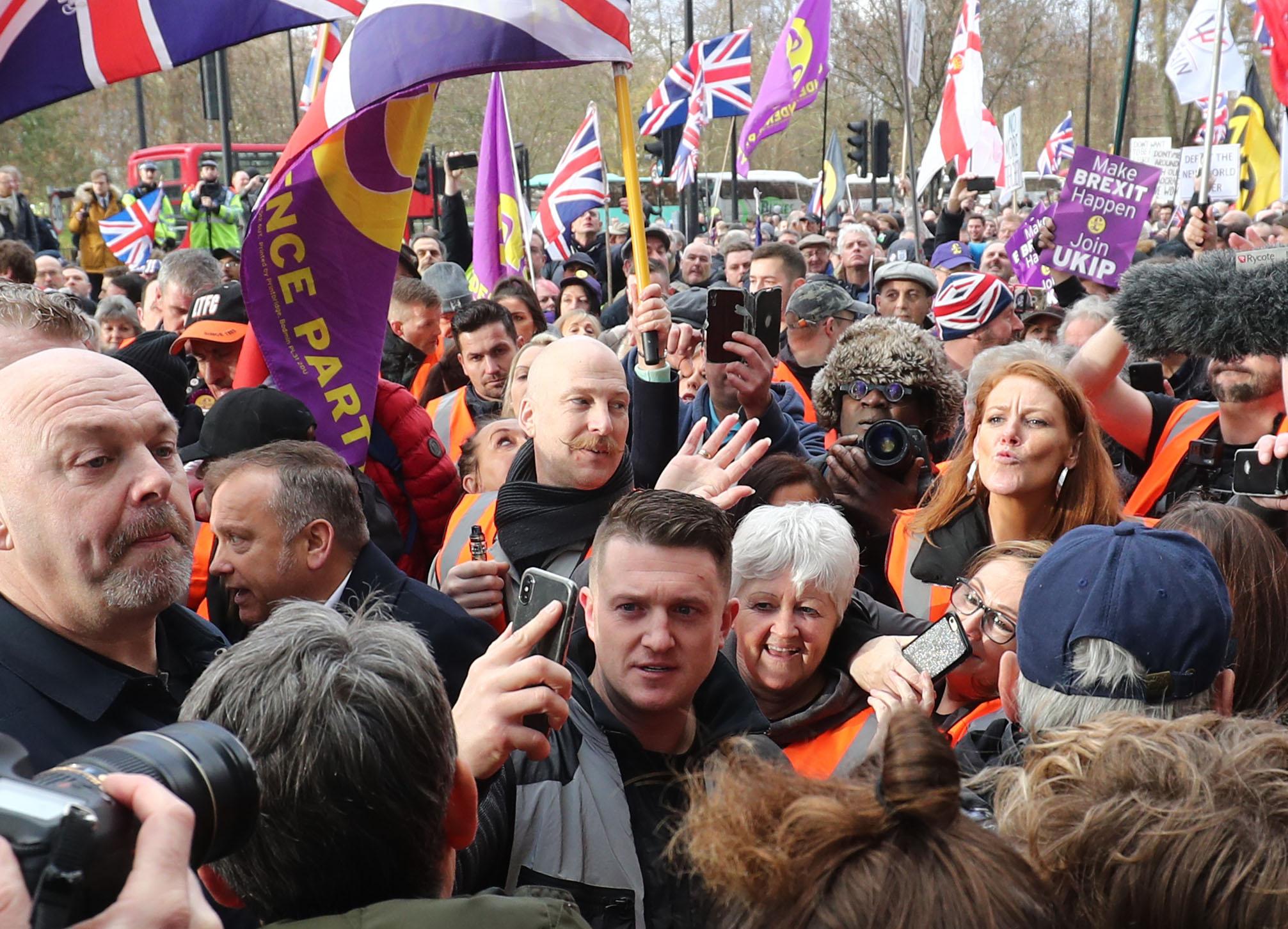 Controversial figure Tommy Robinson, the former leader of the English Defence League, was appointed as an adviser to the anti-EU party last month – which caused uproar in the ranks.

Now ex-leaders Nigel Farage and Paul Nuttall have quit the party altogether, taking a string of senior figures with them.

Riot police and horses are lining the streets in central London trying to keep the two rallies peaceful.

Robinson told crowds today that the establishment "fear a movement that can be policitised across this country".

And Ukip leader Gerard Batten added: "The only we will ever achieve a real exit from the EU is rebuild the Ukip electoral threat once again." 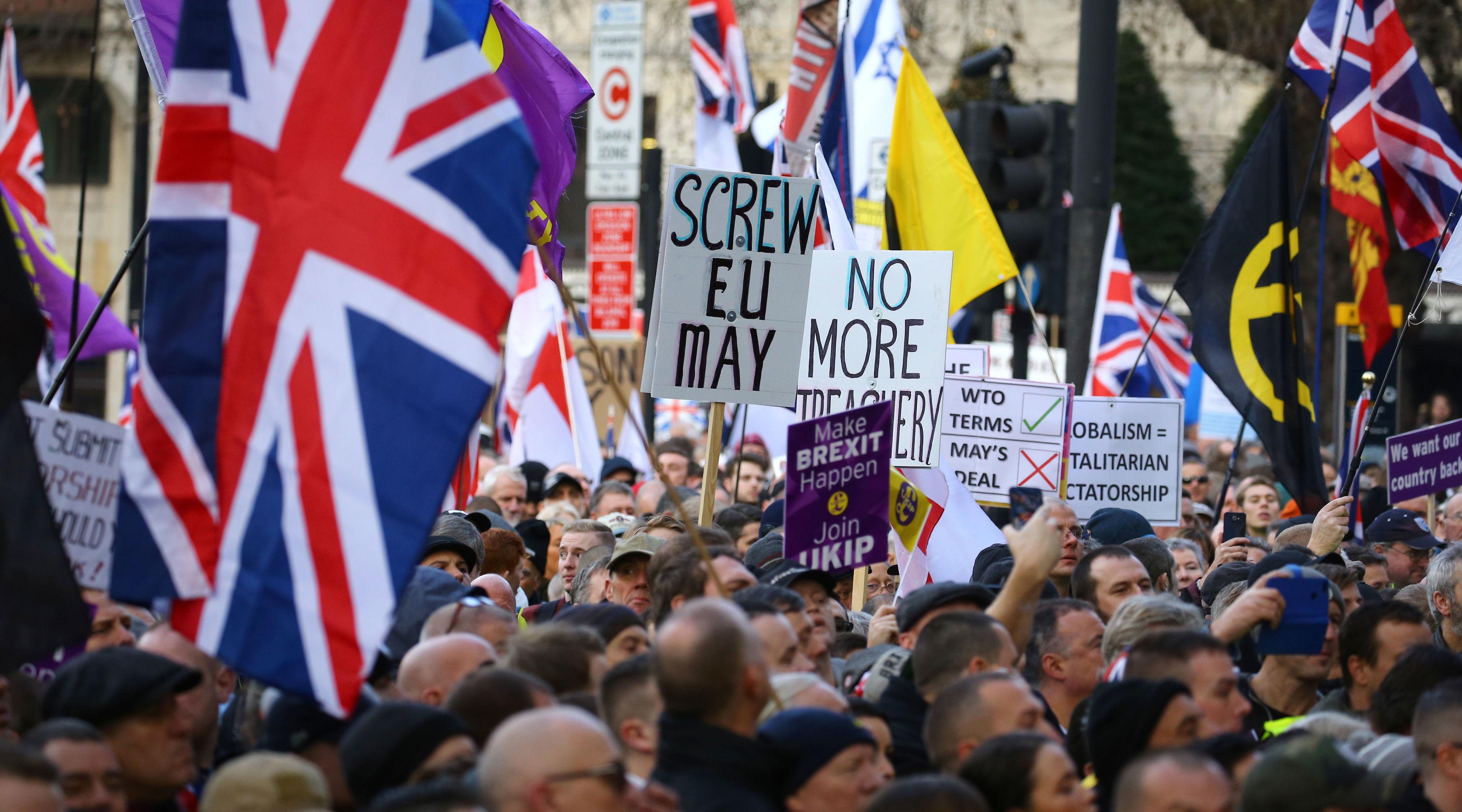 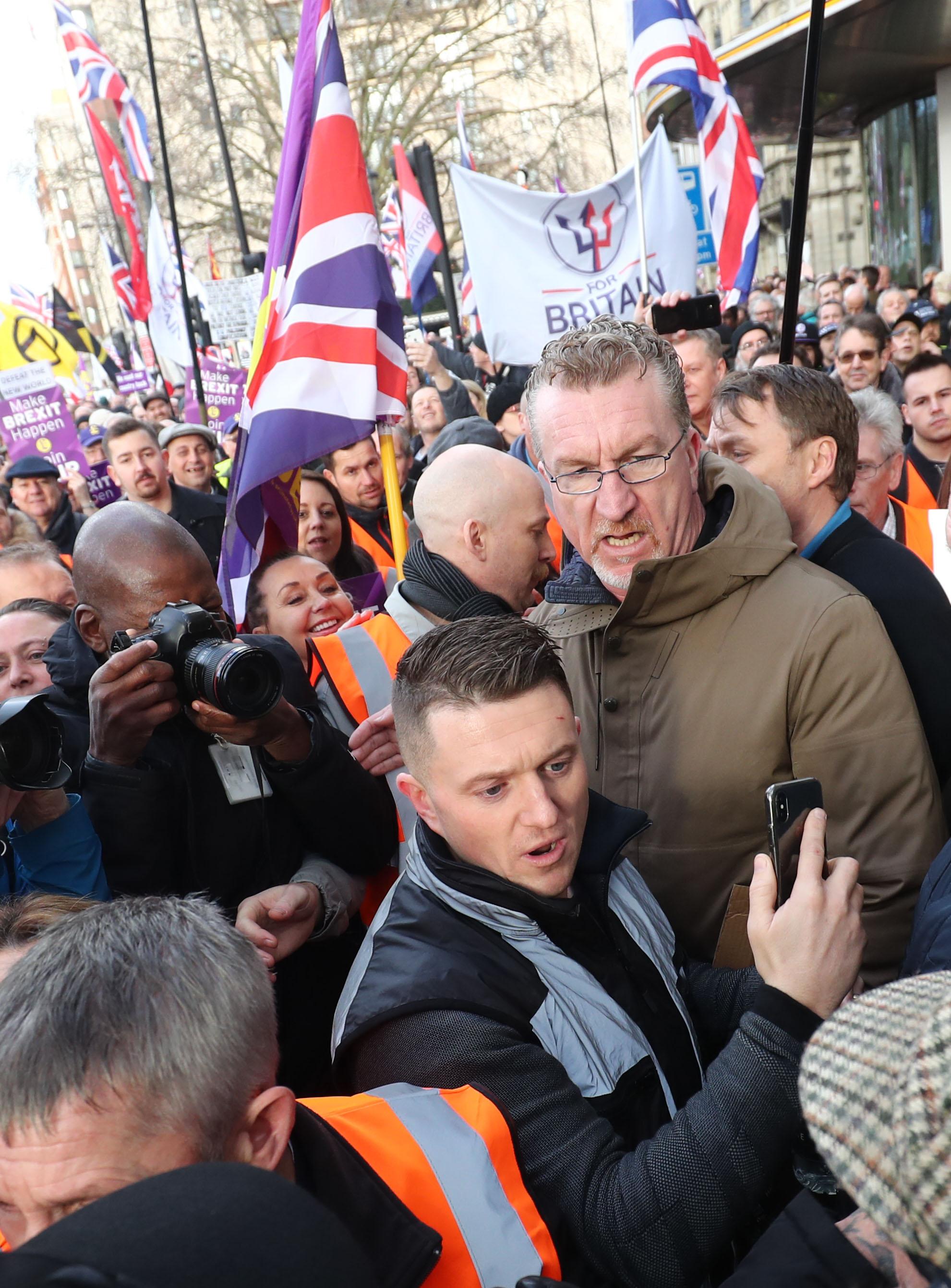 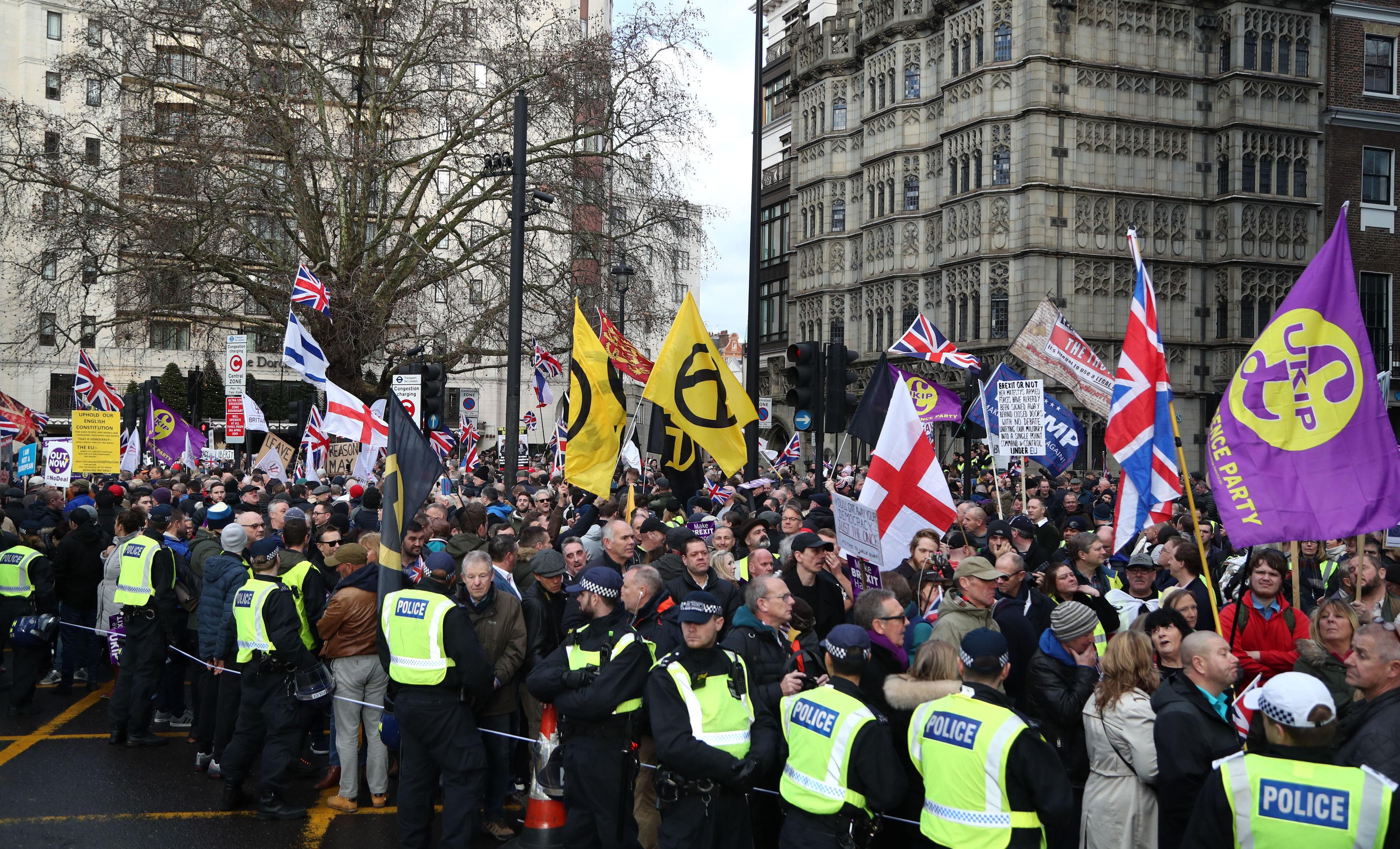 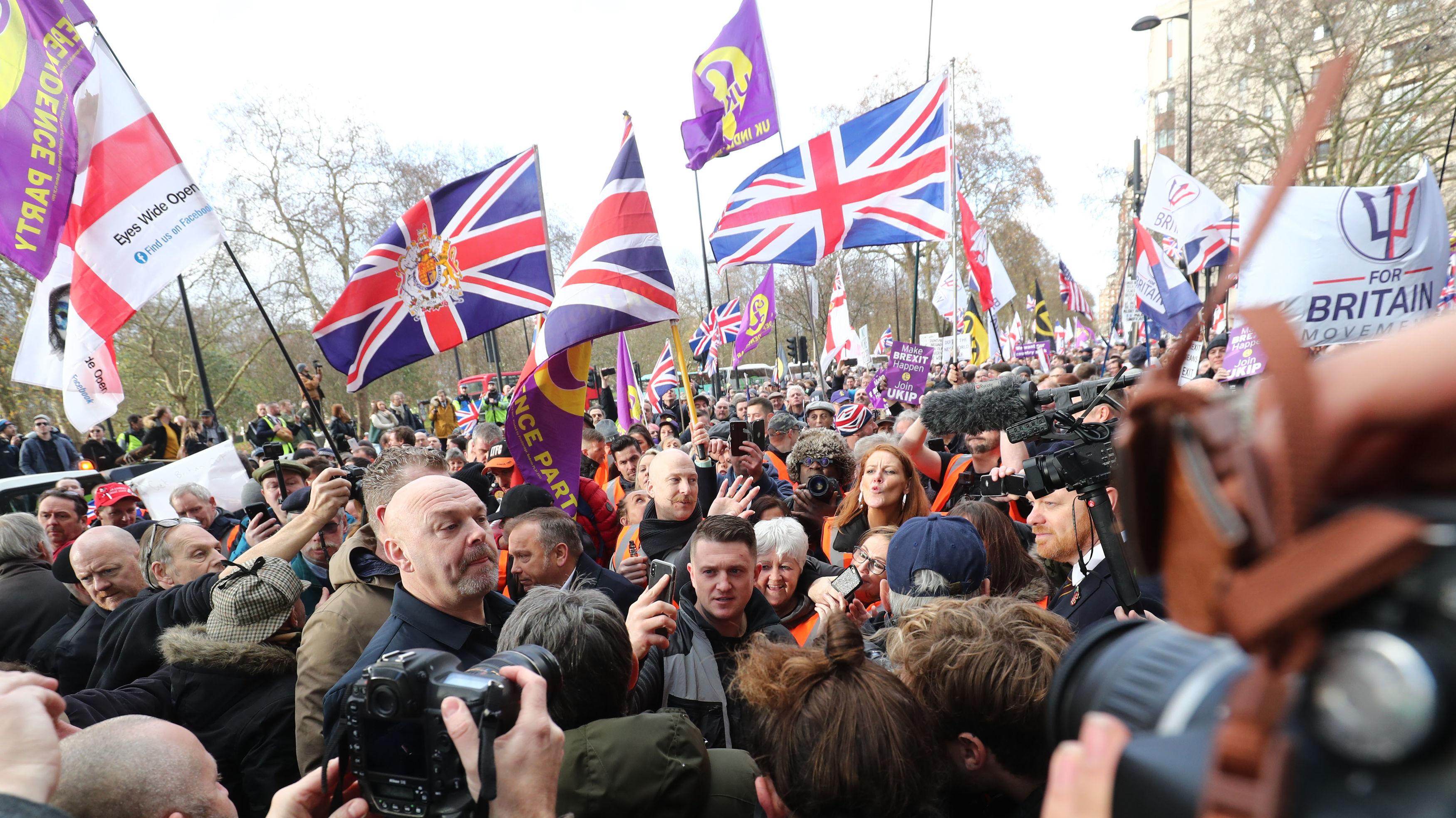 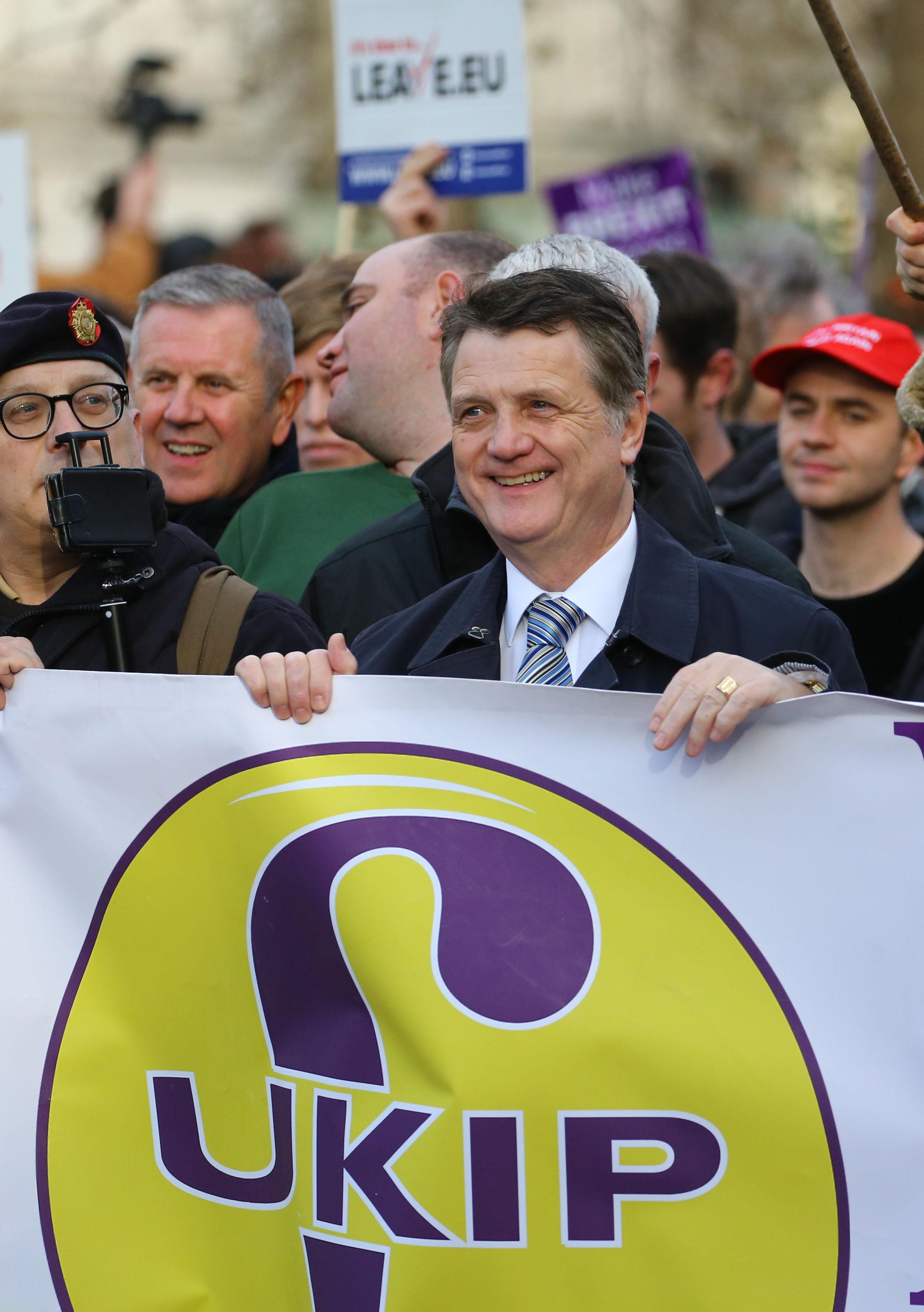 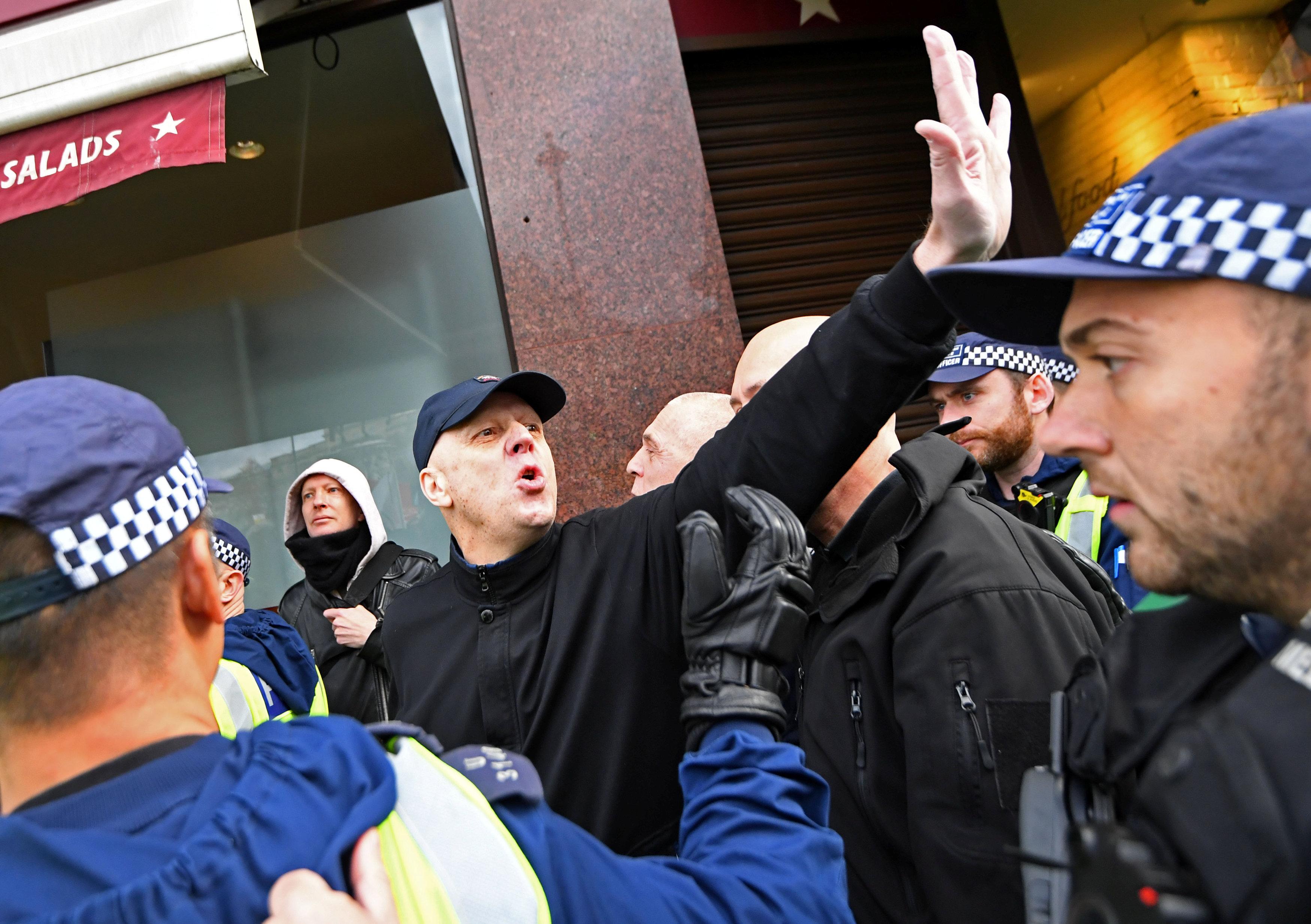 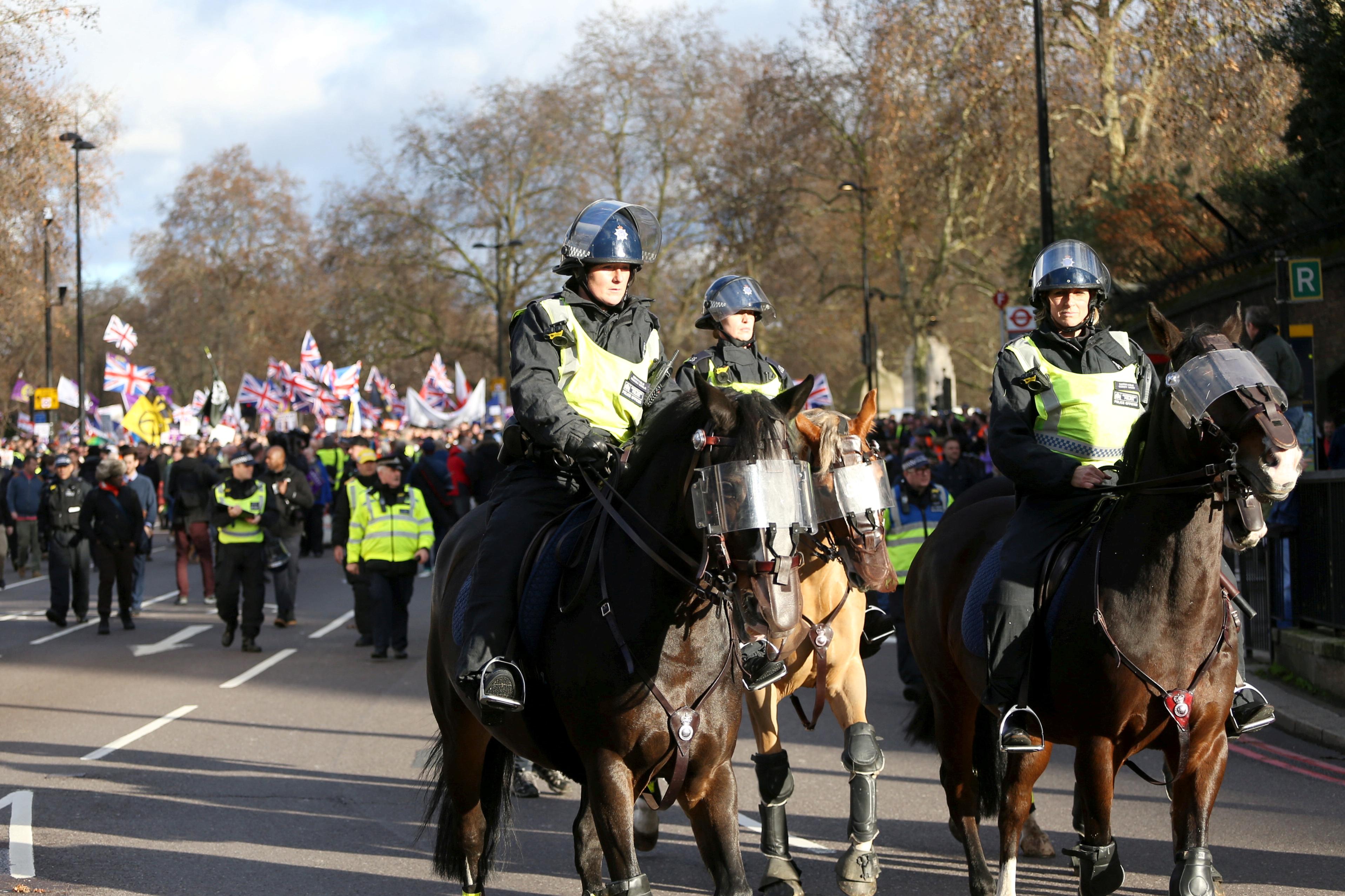 One man even came to the protest carrying a noose for Mrs May.

He told the Press Association: "That’s what the traitor May deserves. That’s what treasonous people get."

Labour's Shadow Chancellor John McDonnell called on the party's supporters to attend the march and protest against Robinson.

He said yesterday:  "This march isn't about Brexit, it's about far-right extremists dressing up in suits and pretending to be respectable."

"It doesn’t matter whether you voted leave or remain, Tommy Robinson doesn’t represent you.

"I call on all Labour members and anyone who cares about the future of our country to join the demonstration on 9 December and stand firm against the poison Robinson is trying to inject into our politics."

A coalition of Momentum and anti-fascist campaigners are set to attend today.

Robunson and his supporters are set to march down Park Lane and Parliament Street.

There are scores of police on hand to keep the two marches separate, and the Met has said they will adopt a "robust arrest policy on anyone who attends and is intent on violence and disorder". 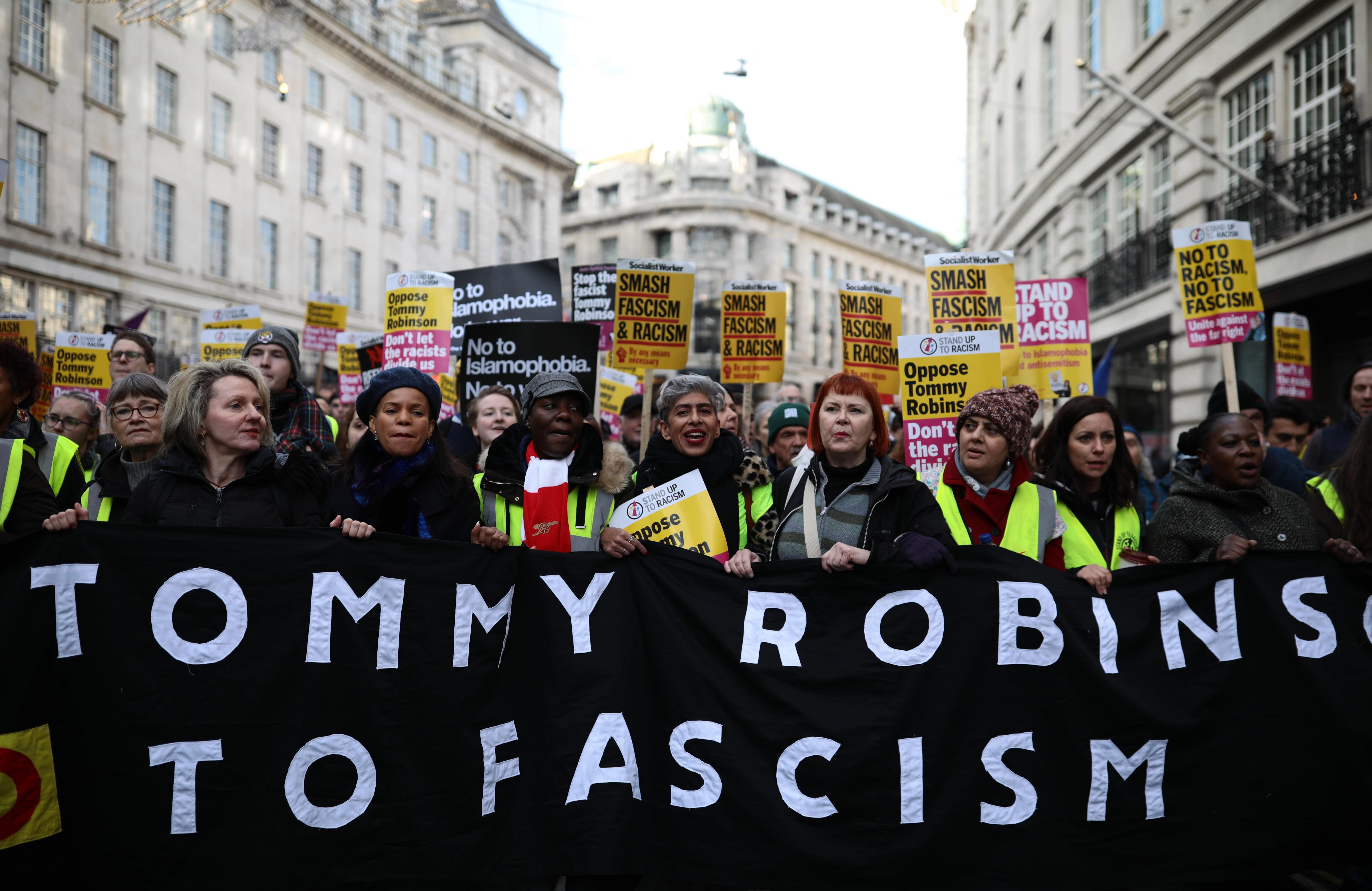 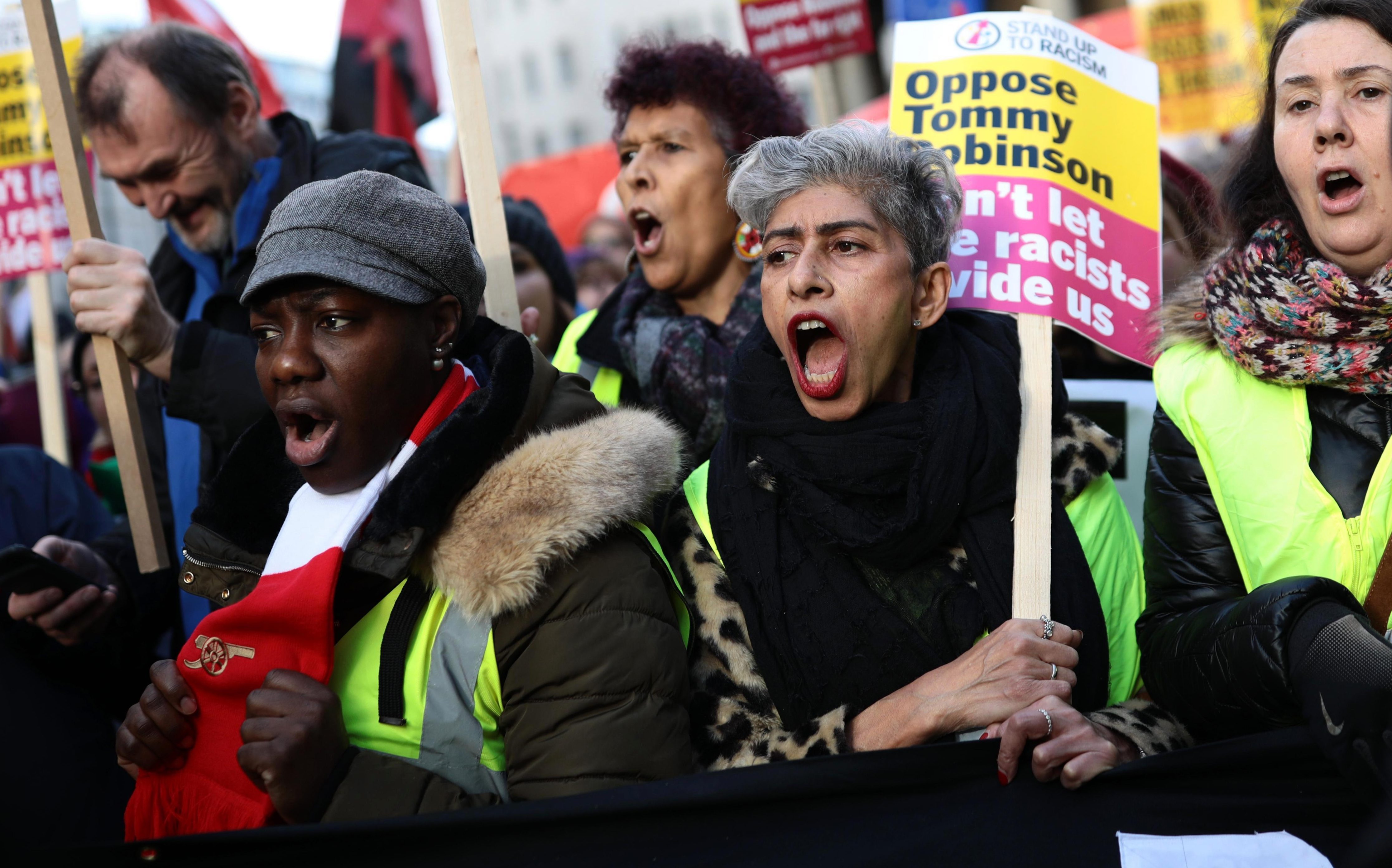 The clip, shared tens of thousands of times, shows the victim with his arm in a cast being dragged to the floor by his neck as his attacker says "I'll drown you" on a school playing field.

The lad, 16, who has since gone into hiding with his family, said the right-wing organisation ‘do right’ and posted links to Tommy Robinson mocking burkas.

The march comes just two days before MPs are set to vote on Theresa May's Brexit deal in the Commons. 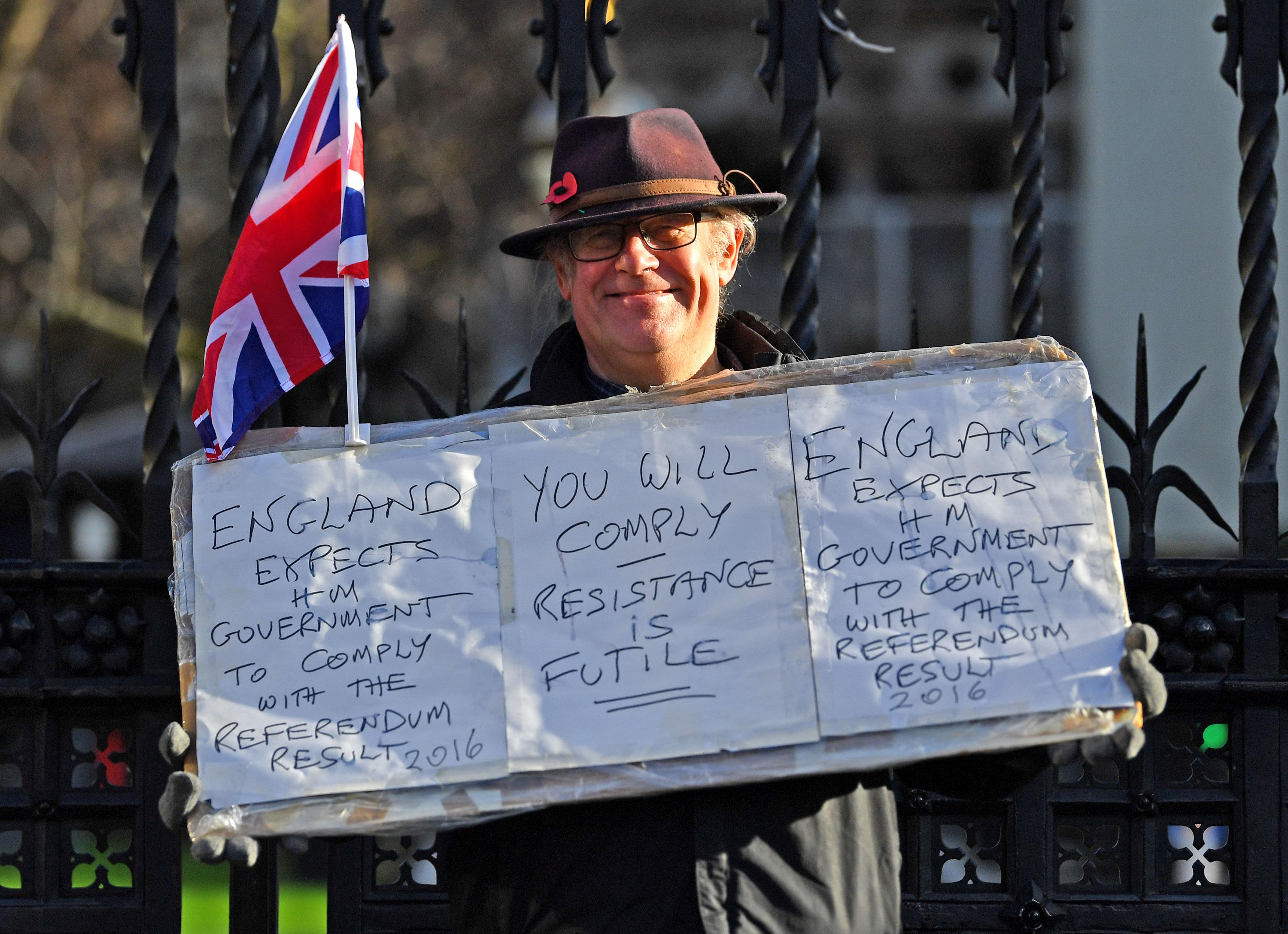 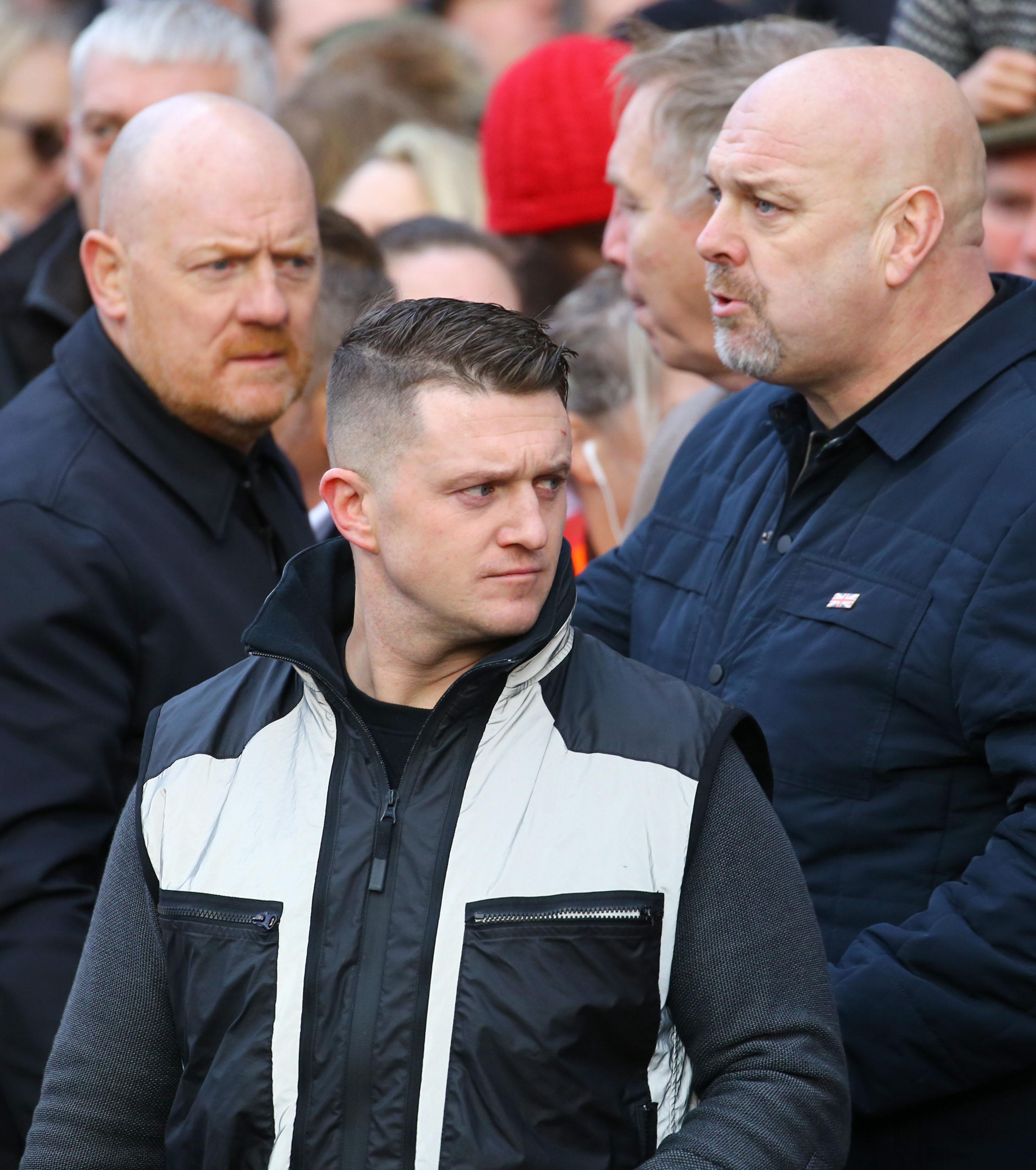 But with growing opposition and hundreds of MPs opposed to it, the vote could be put back.

Mrs May is expected to decide tomorrow whether to ask Brussels for more concessions when she flies out later this week for a separate EU summit.

Today Boris Johnson, Dominic Raab and Esther McVey all threw their hats into the ring to replace her if she falls this week – and all refused to rule out running.

But Brexit Secretary Stephen Barclay said the vote WOULD be happening on Tuesday as planned, even as the PM faces certain defeat.

I was forced to pay £6,000 to fix my garden after the council refused to help – it’s so steep I couldn’t stand on it | The Sun