When I write about a restaurant for Hungry City, my weekly column on New York’s cheaper, less-heralded establishments, I always ask the photographer to take a portrait of the people who run it. It’s important to me to show and honor their faces, and to learn something of the struggle that brought them here — to this tiny storefront or fought-over patch of sidewalk, this underequipped kitchen with smoke leaking from the seams, this awkward room that they’ve done their best to make feel like home.

A dish may be delicious, but that lasts only for a moment. The amazing tamale you had one night out of the back of a truck under the elevated train could never be as amazing as the story of the person who made it.

So as I put together this list of my favorites among the restaurants I reviewed in 2018 (in descending order, although truly, I loved them all), I’m grateful to the owners and chefs for sharing their stories. 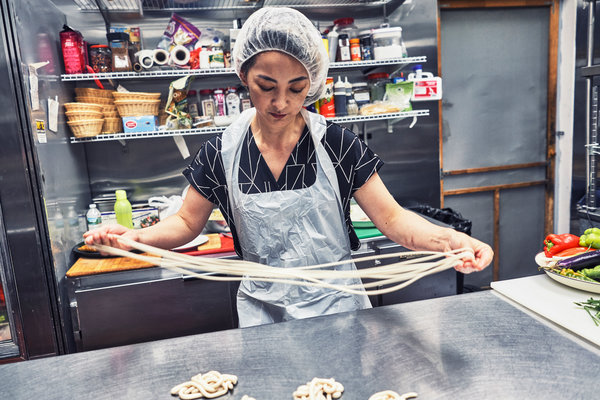 Gulshat Azimova started cooking at age 12 alongside her mother in the village of Zhalpaktobe in southern Kazakhstan. She and her husband, Damirzhan Azimov, are Dungans, descendants of Muslim traders who plied the Silk Road in the seventh century, married Han Chinese and settled in northwestern China until the late 1800s, when their great-grandparents fled government persecution and found a new home across the Tien Shan mountains.

In all the world, there are only about 100,000 Dungans, and in Brooklyn, too few for the census to register. How lucky, then, that we have the Azimovs to introduce us to Dungan food, which here unravels in noodles upon noodles, manifesting as pliant coils stretched long and thin; wide floppy sheets; raggedy drops made by rubbing the dough swiftly between the palms; and two-feet long lariats, looped in on themselves and fried to a snap.

There was only one dish ever available when I visited this food truck parked north of Roosevelt Avenue in Jackson Heights, Queens. But it was the only dish I needed: momos — dumplings from the Himalayas, with sheer skins in a swirl of pleats — made by Thubten Amchok, a former Buddhist monk from Amdo in eastern Tibet. While momos are common currency in this neighborhood that is home to many Tibetan and Nepalese immigrants, sold everywhere from minimalist modern storefronts to shambolic basement dining rooms, Mr. Amchok’s are the ones I return for.

His recipe is simple: meat (ground beef graced with scallions, salt and a dewdrop’s worth of soy sauce) and dough pressed flat until you can almost see through it, then pinched tight so the meat’s juices have nowhere to go, until you take a bite and they run down your fingers, hot, almost burning, and sublime.

In 2014, Yudai Kanayama, a native of Hokkaido, the northernmost of Japan’s main islands, opened the rough-edged and homey Izakaya, in the East Village, one of my favorite restaurants of that year. He was just 24 then, an eccentrically chic fashion school graduate who sold vintage clothing at a Brooklyn flea market, but he already understood the strange magic that makes a restaurant memorable: Make it like nowhere else.

At his new, diminutive spot on the Lower East Side, as at Izakaya, almost every dish comes with a brief narrative on its origins or making, quietly and effortlessly told. By night, the specialty is oden, a winter stew with a base broth that is constantly replenished and grows more potent with time; by day, the space turns into a kissaten (coffee shop), serving slabs of toast as thick as cake under a spackle of sweet red beans and butter.

From the front, this unassuming restaurant suggests a cafeteria, but at the back are cushions for lolling, essential after the stupor of a meal. Ismail Bourrich and his wife, Bouchra Salmi, both immigrants from Morocco, took over what had been a Chinese-Mexican restaurant in Bay Ridge, Brooklyn, and brought in Malika Hakmoun, from Marrakesh, as chef, to recreate the expansive flavors of home.

The procession of plates is dizzying: lamb shank like a gauntlet thrown down among swollen prunes and slivered almonds; chicken wallowing with fleshy green olives and mellowed arcs of preserved lemon; bastilla, a flaking meat pie under a drift of icing sugar; m’smen, a many-layered flatbread with secret caches of butter. And at the end, Chinese gunpowder tea with a bouquet of mint leaves thrust into the pot, poured from a great height.

A year ago, Enver and Jeudy Perez, two brothers born in Santo Domingo in the Dominican Republic and raised in the Castle Hill section of the Bronx, opened this lively canteen in a squeeze of a storefront that can now hardly contain its crowds and verve. Merengue tumbles from the speakers; Spanish carries from one table to another.

Everyone, it seems, is family. Their older brother, Freddy Perez, oversees the floor; their mother, Maritza Reynoso, makes the house hot sauce (and holds the recipe close). Two aunts keep the steam table brimming over with smoky barbecued ribs and a seemingly endless supply of moro (rice and beans). And Yudelkys Paniagua, the chef, cooks dishes to order, like chimi, the Dominican street burger, reimagined as sliders but still gorgeously sloppy, anointed with pink mayo-ketchup whose snap comes from Country Club frambuesa (raspberry) soda.

To enter Belarussian Xata is to be swept up in the onrush of other lives, mid-revel. Every table is or might as well be celebrating something — perhaps the simple fact of existing — with carafes of birch sap and horseradish-spiked vodka, and some of the richest food I’ve ever tried: kerchiefs of cured fatback; potato cakes armored in crackle that ooze cheese when pierced; deep-fried hog ears; a monumental pork knuckle sloughing panels of fat.

Marat Novikov, the owner, left his hometown, Minsk, the Belarusian capital, for Brooklyn three decades ago, when the Soviet Union was verging on collapse. Here, he has recruited a fellow Minchanin, Ilya Frolov, as chef, and created a pastoral fantasia, as if in homage to the primeval forest that still covers much of their native land, with embroidered linen towels flung over tables and pitchers inverted on fence posts made of naked branches.

If I could eat in only one neighborhood, it would be Elmhurst, Queens, where every year more Thai restaurants appear, often opened by young, recently arrived Thai immigrants with both a sharp eye for design and an uncompromising approach to the food of their childhood. Arada Moonroj, the chef of this small but mighty restaurant, mines her mother’s recipes from Lampang in northern Thailand.

Rather than tame or transform ingredients, she gives them full expression, from the meatiness of green jackfruit to raw red weaver-ant larvae, which break in a tiny gush on the tongue, to the iron-rich pork blood that suffuses a mound of rice, purple as a bruise. As for the Thai bird chiles that intimidate some American diners, she deploys them matter-of-factly, as a necessity of life, and at moments in the meal they make the world spin.

Once Little House Café was just a bakery, and it still looks like it, with ad hoc tables, beat-up tile and shelf after shelf of bread and cakes. Slowly, Michael Lee and his wife, Helen Bay, began adding savory dishes, reminiscent of the food at the restaurants they used to run in Malaysia, before they moved to Queens eight years ago and started over from scratch.

The Lee children pitch in: Jackson, the oldest, handles marketing; Joanne works the cash register between classes and another job; and Jeremy, their youngest, cooks at his parents’ side. The fragrance of each dish announces it long before it arrives, be it the smoke wafting off char kway teow, a dark heap of broad rice noodles, raggedy eggs, pork, shrimp and charred rings of squid, or the pungency of fish paste sealed between crispy sheets of tofu skin in a heady bowl of curry mee.

A descendant of the Andean Cañari tribe, who predate the Incas by thousands of years and today number fewer than a quarter of a million people, Lucila Melania Dutan grew up in the mountains of southern Ecuador, nearly 9,000 feet above sea level. In the 1980s, as that country’s economy struggled, she took refuge in Queens, where she and her former husband managed a restaurant for nearly three decades.

After closing it in 2011, she missed it. So in January, her children, Alex, Jennifer and Nestor Jazmani Dutan, gently coaxed her into taking over a former dry cleaner’s by the elevated train and turning it into a showcase for Ecuadorean cuisine. The menu reaches from the highlands to the sea, with earthy llapingachos, achiote-stained potato cakes with gooey hearts of mozzarella, served alongside encebollado, a stew of barely poached tuna, leaching brine.

Maximo Ojeda spent his childhood in Cienega de Zimatlán, a village in Oaxaca, Mexico, with a population of 9,000, no electricity or running water, and a single phone that everyone had to share. When he arrived in the United States two decades ago, he found a job as a dishwasher and worked his way up, all the while homesick for the tortillas that every house in his village made in the morning.

In 2012, he and his wife, Eva Mendes, opened a bodega in Corona, Queens, offering a few dishes out of the cramped back kitchen. Two years later, his mother-in-law, Margarita Perez, flew in and took charge of the menu. Her specialty: tlayudas, great wheels of tortillas a foot wide, slaked with asiento — pork lard rendered through the slow cooking of carnitas — and black beans simmered with avocado leaves. You choose toppings as on a pizza, but the tlayudas are just as lovely with nothing more than quesillo and a scattering of shredded cabbage.

The utilitarian aura of a bodega persists, despite vivid murals painted by a friend from church. “We don’t answer the phone sometimes, we’re so busy,” Mr. Ojeda said. “We try to do the best we can.” 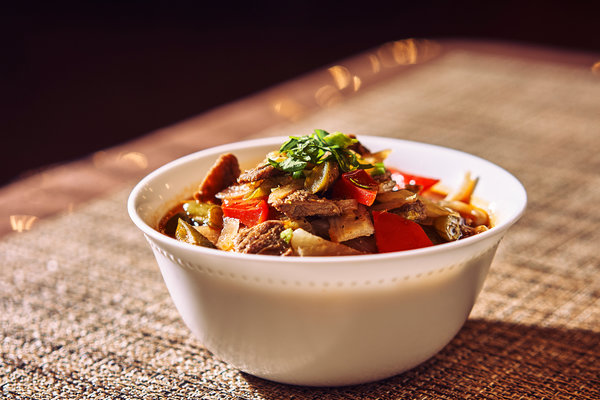 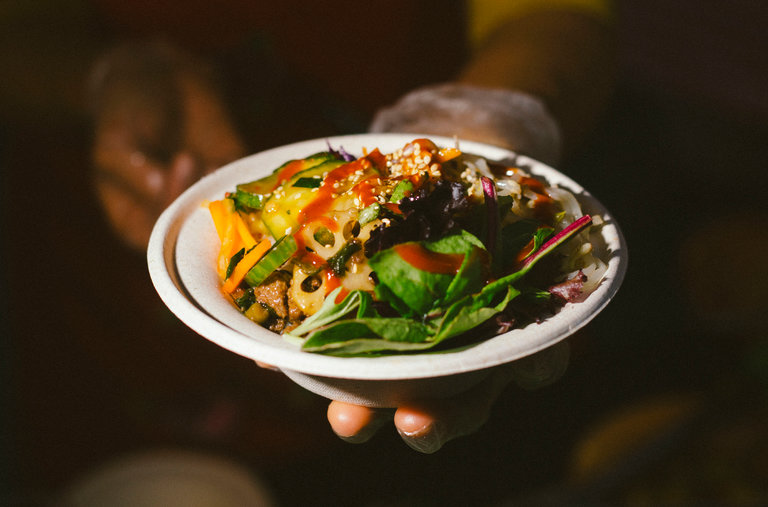 What is tier 4 lockdown?