Bangkok: A millionaire Thai police officer who rubbed shoulders with celebrities and flaunted his fleet of luxury cars, has triggered nationwide soulsearching over endemic corruption after he was filmed suffocating a criminal.

Footage shows Colonel Thitisan Utthanaphon, 41, nicknamed “Joe Ferrari” because of his lifestyle, wrapping plastic bags around the head of a suspect and beating him unconscious.

The ensuing investigation has revealed a culture of impunity and graft surrounding Thitisan and his high-profile connections, triggering mass protests. Meanwhile it has shone a light on his wealth, including a mansion in Bangkok, 42 expensive cars, including supercars from Ferrari, Porsche, Bentley and a $US1.5 million ($2.07 million) limited edition Lamborghini Aventador. 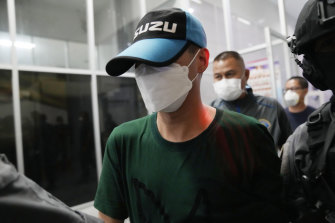 Thitisan was found to have a personal fortune estimated at $US18 million. He had reportedly achieved all of this on a police superintendent’s salary of around $US1300 a month.

The video and revelations of riches led to demands for a full and transparent inquiry into police misconduct in Thailand, and reinforced the popular public perception of an unaccountable force intent on self-enrichment.

Thitisan’s lifestyle may have continued had the CCTV footage not been leaked to Sittra Biabungkerd, a lawyer who put the video on Facebook. He told AFP he wanted to stop police “helping each other to get away” with murder. 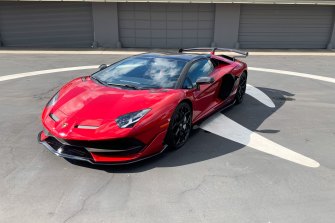 Thitisan has a fleet of 42 cars, including a Lamborghini Aventador.Credit:Bloomberg

Born into an ordinary family, he won spots at the prestigious Armed Forces Academies Preparatory School, and the Police Cadet Academy, before he married into wealth in 2009.

The couple were often seen at high society events and when the marriage fell apart a few years later, he remained a familiar face among Bangkok’s elites, where he made headlines for his fondness for fast cars and dating a string of glamorous actresses and models.

In 2014, the Bangkok Post reported he made a very public proposal to actress Pichanak “May” Sakakorn, getting down on one knee at the Millennium Hilton in front of her A-list celebrity friends. The marriage did not go ahead and he is now linked to a famous TV host, whose father is a senior police officer.

Investigators were due to submit their findings to the National Anti-Corruption Commission on Friday before deciding whether to forward the case to the state prosecutor.

Officers involved in the suffocation of Jeerapong Thanapat in an alleged attempt to extort about $US60,000 initially tried to resuscitate him before taking him to hospital and insisting he had collapsed from an amphetamine overdose. The video dispelled those claims.

Thitisan now stands accused of murder, abuse of power and other offences – all charges he denies.

Poor salaries and benefits were partly to blame, he said. “This opened the door for the police to use their power to make more money for themselves.”

The well-connected officer was once at the heart of the opaque system of power networks that rule the south-east Asian nation, but the public, who have faced decades of extortion at the hands of the police appear to be running short of patience.

Chachavalpongpun said cries for police reform had been a key demand of recent mass pro-democracy protests. “Overall, it is about transparency, accountability and responsibility. So that’s why what happens inside the police fits in well with the public agenda of the protesters,” he said.

The government has attempted this year to kickstart police reform by amending the National Police Act.

Father of show jumper told to pay back £217,000 from cocaine smuggling