Was it a Channel 4 stitch-up? Tory fury as leadership candidates knock ‘chunks out of each other’ during first TV debate

Boris Johnson’s supporters last night attacked Channel 4 over its debate format and said it proved he was right not to take part.

Junior Brexit minister James Cleverly said the show was set up to get leadership candidates to ‘knock chunks out of each other’.

Presenter Krishnan Guru-Murthy courted controversy by introducing each candidate by the school and university they went to. It meant that Rory Stewart’s schooling at Eton was highlighted, together with Jeremy Hunt’s Charterhouse background, while Sajid Javid was introduced as having been to a comprehensive school near Bristol.

Mr Guru-Murthy also made the point that all the candidates were men. The broadcaster claimed it had chosen its audience on the basis they were Tory members or people who would consider voting Conservative. However, it was the most Left-leaning candidate – Mr Stewart – who consistently attracted the most applause. 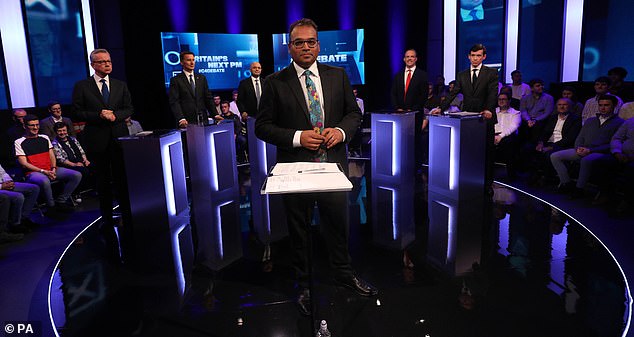 Mr Cleverly said: ‘This Channel 4 debate is geared up to encourage Conservative leadership candidates to knock chunks out of each other. That’s not how this campaign should be conducted. It’s probably good for Channel 4’s viewing figures but I’m astonished that so many candidates are playing along.’

Meanwhile during the TV debate Michael Gove denied he was a hypocrite after he admitted taking cocaine. The Environment Secretary said he had learned from his mistakes and his drug-taking had taught him how important it was to help people who had led ‘difficult lives’.

In a section about each candidate’s weaknesses, Mr Guru-Murthy suggested that Mr Gove’s hypocrisy was his failing. He replied: ‘No. I made a mistake. We all do – we are all frail and faulty – and if you do make a mistake and have fallen short on your standards, you don’t lower the standards, you reflect on your mistake.

‘If we fail or falter, I think one of the things we can all do is learn from them. I learned from my mistake. One of the reasons I am in public life is in order to help people who have had difficult lives.’ Mr Hunt backed Mr Gove, saying: ‘Every single one of us has done something 25 years ago we wouldn’t want our mum and dad to find out about. 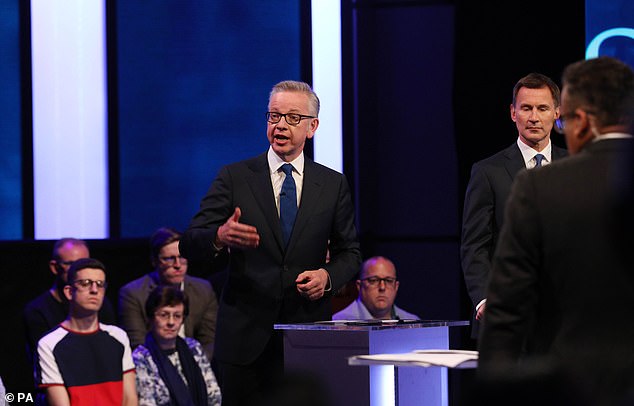 ‘Whatever the horrors of drugs, when we face a constitutional crisis of the magnitude of Brexit we should not be trivialising the debate by talking about what we got up to 25 years ago.’

Mr Gove earlier declared himself the ‘Comeback Kid’ in the Tory leadership contest. He sought to relaunch his campaign one week after it was rocked by his admission that he used cocaine 20 years ago. In a Sunday Times interview, he claimed to be the ‘Chumbawamba candidate’ – a reference to the band’s 1997 hit Tubthumping which included the line ‘I get knocked down. But I get up again. You’re never gonna keep me down.’

Mr Gove revealed he had secured the backing of Northern Ireland Secretary Karen Bradley, and Scottish Secretary David Mundell. Despite being written off by his rivals after the cocaine confession, Mr Gove finished third in the first round of voting with 37 MPs backing him. He said: ‘Someone said the other day, “Michael, you are the Comeback Kid. You are the Chumbawamba candidate. You get knocked down, but you get up again.” That’s been true throughout my career.’

He added: ‘At the beginning of last week people said I was going backwards. We put on votes in the course of the week – I’m well-placed now.’

Theresa May has been accused of trying to tie Boris Johnson’s hands as she seeks to push through a £27billion funding pledge for education.

She is understood to be planning to present her three-year plan to Cabinet as soon as tomorrow as part of a bid to shore up her legacy.

Government sources said she ‘is still Prime Minister’ and ‘education is very high on her list of priorities’. However, the move is being resisted by the Treasury amid claims it would be ‘immoral’ to limit the ability of Mrs May’s successor to deliver on their own pledges.

One Cabinet minister said the Prime Minister was attempting to ‘stitch up’ a deal with the Treasury and then ‘bounce’ ministers into signing it off ahead of a public announcement. 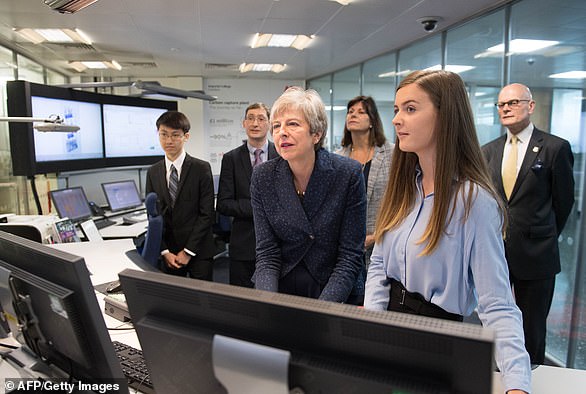 ‘It really has to be a decision for the next person,’ said a Whitehall figure. ‘It is just not moral for the PM to make this commitment.’ Mrs May’s proposed boost for education amounts to about £7billion a year on resources, including staff, and £2billion per year on capital expenditure, such as books and building repairs.

It would not require legislation and is the biggest of the ‘legacy projects’ she is trying to secure before leaving No10.

It follows a separate funding increase for the NHS last year.