Conservative MP Sir Desmond Swayne has admitted he was wrong to say being gay was ‘gross and unnatural,’ in Parliament 20 years ago – pinning his outdated views on ‘intellectual laziness’.

The former senior aide to David Cameron previously voted against reducing the age of consent in the gay community from 18 to 16, while also supporting the ban on promoting homosexuality in schools, known as Section 28.

Parliament archives show in 2000 he said homosexuality is ‘gross and unnatural’ and the same year he caused outrage when he appeared to agree with an American evangelist’s description of Scotland as a ‘dark land where public life is dominated by homosexuals’.

Two decades on, the 64-year-old has written a blog stating he has undergone a ‘transformation,’ and now finds his previous comments ‘shocking’.

Sir Desmond is no stranger to controversy. In 2019 he defended wearing blackface to a fancy dress party, saying people have ‘lost their sense of humour’. 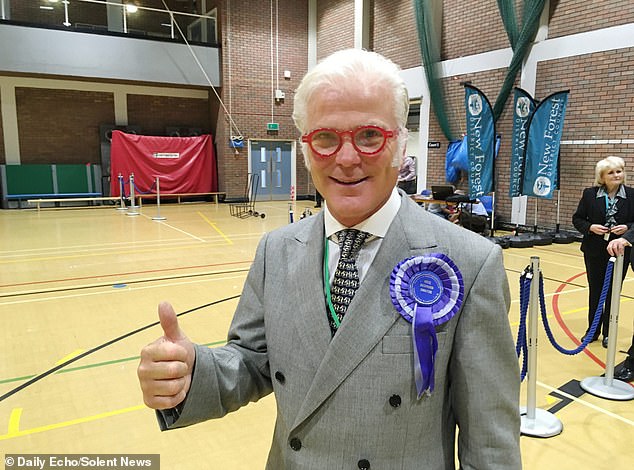 Sir Desmond Swayne has condemned comments he made in 2000, describing being gay as ‘gross and unnatural’. The Tory MP said he found the comments ‘shocking,’ adding he has undergone a ‘transformation’

Last year he condemned the death of George Floyd, but warned Black Lives Matter protesters ‘have it coming,’ amid reports of rioting and looting in parts of the US.

During the Covid-19 pandemic, the outspoken MP has been criticised for sharing ‘dangerous misinformation’ about the virus and has been a vocal critic of lockdown measures.

Concerning his new outlook on the LGBT community, the former Minister for International Development has shared a blog on his website titled ‘How I Came to Recant’.

It reads: ‘[Speeches] I made years ago in debates about the repeal of Section 28 and reducing the age of sexual consent have surfaced, in which my antediluvian prejudices are quite shocking, even to me.

‘How could I have ever believed such things, let alone said them?’

He added: ‘I call it a transformation not an evolution, because it was sudden.

‘I put my original prejudice down to intellectual laziness. I simply never challenged, or even thought about the views that I held.

‘Furthermore, when I received a very large correspondence in support of my position and against the liberalising measures that we were debating, it was so much easier to simply reply by stating that I agreed with them, rather than investing any intellectual effort in the matter.’

Sir Desmond, an MP since 1997, said he had a ‘flash of enlightenment’ when Parliament debated the Sexual Orientation Regulations legislation and how it impacted homosexual customers using commercial services such as in the hospitality industry.

He added that his ‘transformation’ saw him ‘become the champion of the Equal Marriage Act, the Lord Commissioner responsible for whipping it through all its stages in the Commons’.

In 2000, while debating the Sexual Offences (Amendment) Bill to lower the consent age for homosexuals from 18 to 16, which was ultimately passed, the MP said homosexuality is ‘unequal’. 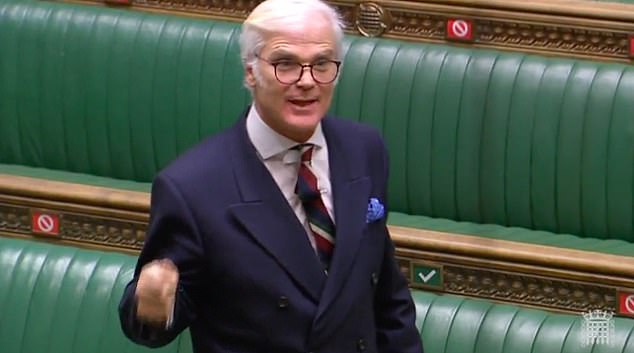 Sir Desmond Swayne has come under fire in recent years after defending wearing blackface at a fancy-dress party. He has also been criticised for sharing ‘dangerous misinformation’ about the Covid-19 pandemic and has been a vocal critic of lockdown measures

He said: ‘It is a restriction that applies only for two years. If the love is that profound, can it not wait?

‘I believe that homosexuality and ordinary sexual behaviour are clean different, and not equal in any way. It is proper that the law should establish that inequality.

‘It is proper that young men of 16, who I believe are still very impressionable, should have the assistance of the law in reinforcing a powerful message that homosexual behaviour is not normal.

‘Those parties disappointed at 16 by being unable to pursue their homosexual desires are only being asked to wait two years until they are marginally more mature and better able to make the decision.’

In 2004, he was in the minority when he voted ‘no’ on the Civil Partnership Bill.

Following last week’s blog, Eloise Stonborough, associate director of policy & research at Stonewall, said: ‘It’s refreshing to hear Sir Desmond Swayne reflect on how his views on LGBT+ rights have changed since he spoke against the repeal of Section 28 and reducing the age of consent.

‘Too often in today’s polarised society, it’s assumed people can’t change their minds or grow from past mistakes, but Sir Desmond Swayne shows that doesn’t have to be the case.

‘People in positions of political power have a responsibility to champion the individuals they represent, and to invest the time and effort to understand the issues at stake.

‘We have always relied on bold leadership to secure our freedom, our equity and our potential.

‘Today, more than ever, we need leaders from across society to step up, be courageous, challenge misinformation and support LGBT+ communities.’

Europe’s air TWICE as clean as it was before coronavirus as people forced to stay home, new satellite pics reveal – The Sun

Two teenage boys are tortured, raped and then buried alive in Sweden