DimbleBYE! Standing ovation for veteran host as he bows out of chairing Question Time after 25 years

Veteran broadcaster David Dimbleby received a standing ovation at the end of recording his last-ever edition of Question Time tonight.

Tributes are already pouring in for the 80-year-old newsman, whose place hosting the BBC’s flagship current affairs debate programme will be taken by Fiona Bruce for the first edition of the next series on January 10.

Tonight’s show, which will be broadcast at 10.45pm, finished recording in Southwark moments ago and the audience rushed to their feet in honour of the longstanding host.

Politicians, former panellists, audience members, journalists and cameramen have praised Mr Dimbleby’s professionalism, unflappability and courtesy during his quarter-century at the helm. 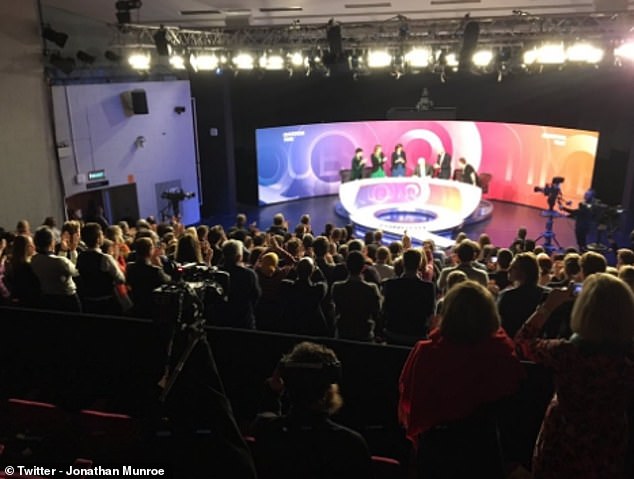 The Question Time audience in Southwark came to their feet tonight to mark David Dimbleby’s last broadcast as chairman, after 25 years 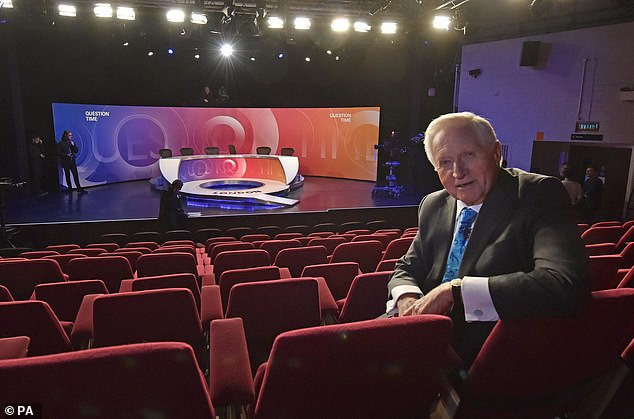 Bowing out: David Dimbleby, who has chaired the BBC’s flagship current affairs debate programme Question Time since 1994, is presenting his last broadcast tonight

Piers Morgan reminisced on his 22 appearances in Mr Dimbleby’s 25 years on the programme, tweeting that the pair had shared ‘many a laugh, jibe, and heated debate’ and calling the chairman a ‘great broadcaster’ and a ‘great guy’.

Julia Hartley-Brewer tweeted her ‘huge love and respect for the fabulous David Dimbleby’ calling him ‘a true pro’ and ‘a bloody hoot at the post-show dinner’.

Last week on the penultimate show, former Daily Telegraph editor Charles Moore said the ‘only two things that really have continuity in this country’ were ‘Her Majesty the Queen and David Dimbleby’ 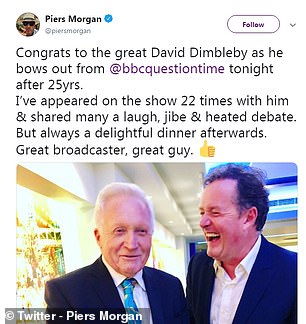 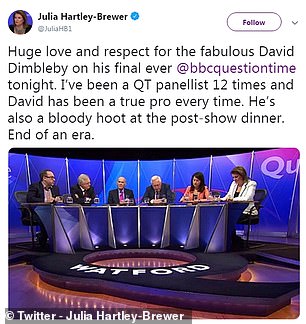 Telegraph journalist and Question Time panellist Tim Stanley said: ‘He’s got a journalist’s eye: this isn’t about choreographing events but observing and analysing them.

‘He is, as one distinguished TV veteran put it to me, perhaps the last connection to the golden age of Robin Day, Alastair Burnett or Brian Walden, of journalists with wide interests but a specific talent for spotting the pertinent question.’

Radio broadcaster Iain Dale called Mr Dimbleby ‘one of the greatest broadcasters of our age’ and ‘an institution’, adding ‘It’s almost impossible to imagine anyone else presenting the programme’.

He praised the presenter’s ‘professionalism and courtesy’.

A Steadicam operator who had filmed editions of the programme, James Elias, spoke of his ‘pleasure’ at having worked with a ‘broadcasting legend’ and others on Twitter said the presenter would be ‘sorely missed.

After the recording Caroline Lucas told MailOnline: ‘It’s crucial that politicians are held to account and that people across the country get a chance to challenge them.

‘For 25 years David has played a central role in political debate in this country – and always keeps us on our toes. 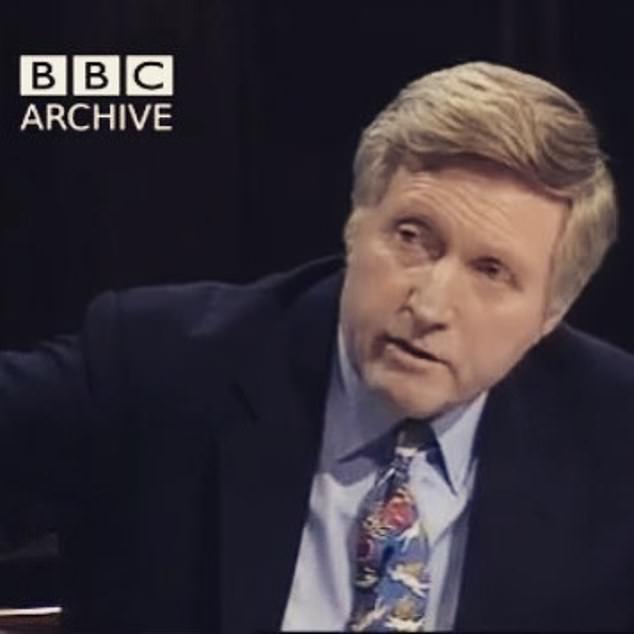 David Dimbleby, son of broadcaster Richard Dimbleby, started at the BBC in the 1960s and anchored coverage of the 1979 election as well as the subsequent ten 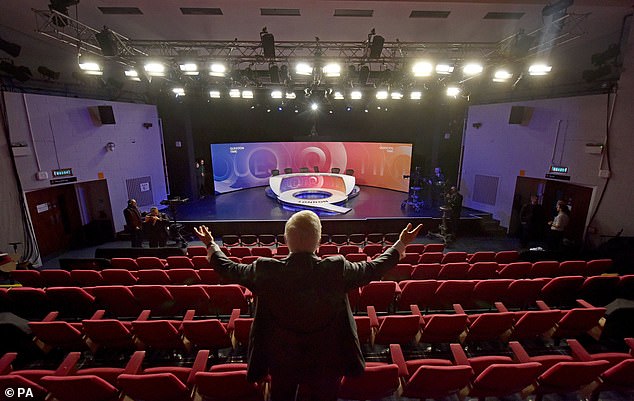 Mr Dimbleby, 80, has said he has no plans to retire but will return to his ‘first love’, reporting. 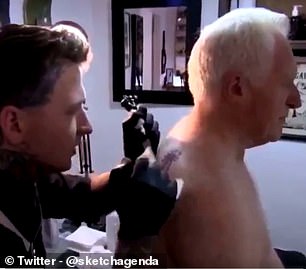 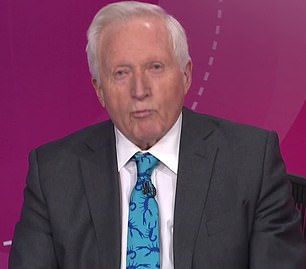 ‘I’ve seen the most experienced politicians trembling with nerves before coming on Question Time – and I certainly feel that way myself – because he has a knack of getting to the heart of the matter and – quite rightly – will let politicians get away with nothing.’

Mr Dimbleby wore a blue tie decorated with scorpions for his final broadcast – seemingly a reference to the scorpion tattoo he got on his right shoulder at the age of 75.

He said of the inking: ‘You are only old once. I have always wanted a tattoo. I thought I might as well have it done now. It’s a dream come true for me.’

In an evening dominated by the Brexit debate and a dozen shouted questions and interjections from members of the public in the audience, at one point Mr Dimbleby took David Davis to task when the latter seemed not to be addressing a question, saying, ‘I’m chairing this.’ 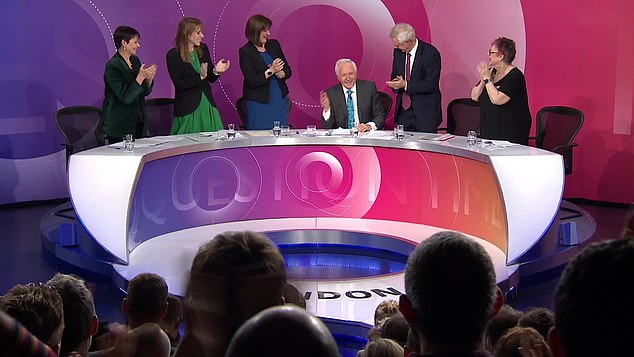 The host received a standing ovation from his panelists

At the conclusion of the programme, having received a standing ovation from the audience and his panel, Mr Dimbleby said the programme ‘marked the end of his tenure as the Chair’, but said the show, more than any other he works on, was ‘truly a team effort’.

He said: ‘I did want to end by thanking the people who’ve made it possible over the last 25 years: the editors, the producers, the researchers, the directors, our technical backup.’

He finished by thanking the team who set up the studios and select audience members, calling them ‘our engine room’ and in a nod to criticism of perceived BBC bias he said the job was ‘as we know, with the political pressures upon us, not easy’.

He signed off by thanking his studio audience and the 100,000 people who have made up Question Time audiences over the years, before plugging Fiona Bruce’s first edition in the chair on January 10 and finishing: ‘From me, a happy Christmas, and not goodbye, but goodnight.’

Among the outpouring of praise and respect on Twitter were occasional broadsides against ‘bias’ by Mr Dimbleby or the programme – from all points on the political spectrum.

Some online criticised the panel for including two Conservatives, others took aim at its complexion of four Remainers to one Leaver.

Question Time to have its first female host in 40 years

News At Six and Antiques Roadshow presenter Fiona Bruce, 54, will replace Mr Dimbley from January, becoming the first female full-time host of the show in its 40 year history.

He father John, who left school at 16 to become a postboy, went on to become regional director of Unilever in Singapore, where Ms Bruce was born. 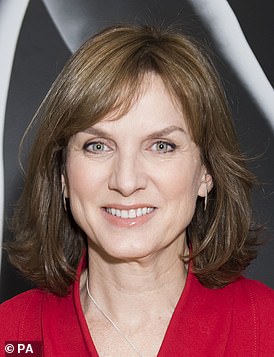 Ms Bruce will take over the programme

She attended an international school in Milan and London girls’ public school Haberdashers’ Aske’s before reading French and Italian and Hertford College, Oxford.

She has said she was something of a punk while at Oxford, singing in rock bands and ‘dying her hair blue’ – while remaining a serious student.

She joined BBC Panorama as a researcher in 1989 and worked at BBC Breakfast News and Newsnight before joining News At Six in 1999. She also co-hosted Crimewatch for eight years.

Now best-known for the BBC News at Ten and the Antiques Roadshow, she is said to have performed superbly in recent auditions for the Question Time role.

When her appointment was announced Ms Bruce said: ‘It is an honour to be asked to take on one of the great political programmes of the BBC, particularly at a time of such historic change for the UK and tumult at Westminster.

‘For many years, Question Time has been presented by one of my television heroes so I am thrilled and not a little daunted to be stepping into his shoes.’

Mr Dimbleby’s time chairing the programme – a tenure which has encompassed the collapse of the Major government, the Blair landslide, the Iraq war, the Parliamentary expenses scandal, the financial crisis, the Coalition government, and Brexit – has not been without controversy.

In 2009 the BBC chose to invite British National Party leader Nick Griffin to take part in the debate, for a show which would become the most-watched of the show’s entire run – which started in 1979 – with an audience of more than eight million.

Mr Dimbleby said that rather than ‘no-platforming’ the BNP he wanted to ‘expose’ their views to an audience.

He told BBC Radio 4’s Front Row programme: ‘The idea of exposing the BNP or, to put it more objectively or disinterestedly, allowing the BNP to face an audience and face questions from them seemed to me to be the right thing to do – as long as they were a substantial political party or a party big enough to be included.’

Other heated moment have included jeers and boos from the audience for Tory Chairman Eric Pickles at the height of the expenses scandal when he explained he had two homes because he required a property close to Westminster in order to attend meetings.

‘Like a job in other words’, said Mr Dimbleby, to a much warmer audience reaction.

And when an audience member would not stop interrupting Remain activist Gina Miller last year, the presenter told him in no uncertain terms he ‘ought to leave’ – which he did.

David Dimbleby, whose father Richard was a revered BBC broadcaster and whose brother Jonathan hosts Question Time’s radio equivalent, Any Questions, on Radio 4, joined the BBC as a reporter in Bristol in the 1960s.

He anchored the BBC’s overnight coverage 1979 general election – a role he would retain for the next ten general elections – as well as coverage of the funerals of Princess Diana and Margaret Thatcher, the Queen’s Golden Jubilee, and the leaders’ debates in the run-up to the 2010 general election.

He has said he has no intention to retire but will return to his ‘first love’, reporting. 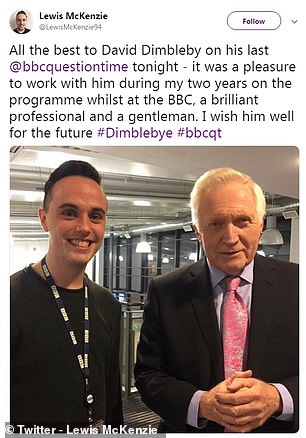 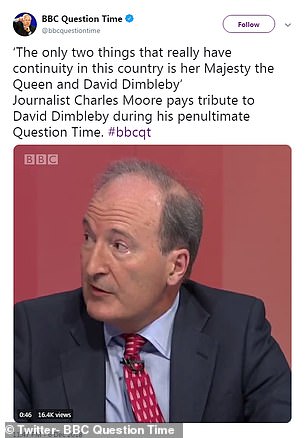 Beautician, 29, killed herself after 'struggling to find joy in anything' when she lost passion for beauty job