London: Counter-terrorism police are investigating a trio of explosive devices mailed to buildings associated with London's Heathrow and City airports, as well as Waterloo station. 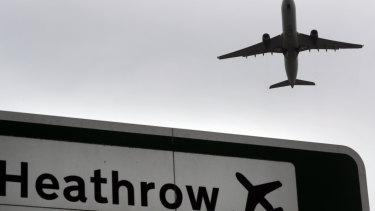 Counter-terrorism police are investigating after three suspicious packages were found in London, including one near near Heathrow Airport. Credit:AP

"The Met Police Counter Terrorism Command is treating the incidents as a linked series and is keeping an open mind regarding motives," Scotland Yard said in a statement.

The first device was reported in the west-London suburb of Hounslow at 9.55am local time. The package was opened by staff at The Compass Centre, causing it to ignite.

The building was evacuated and remains closed. No one was hurt and no flights were affected.

Just before midday, British Transport Police were called to deal with a report of a suspicious package at the post room at Waterloo Station. The package was not opened and police said specialist officers "made the device safe". There were no disruptions to the station or train services.

Docklands Light Rail (DLR) services to London City Airport were briefly suspended when a suspicious package was reported at City Aviation House at the Royal Docks in Newham. No flights were disrupted.

No arrests have been made.

Musician hanged himself after bouts of loneliness, inquest hears

Eastern Ghouta: What happened and why