The words "Trump" and "second term" could be seen faintly in the background of the message, which was sent on Saturday from the Prime Minister's Twitter account shortly after Biden was declared the winner of the US presidential election. 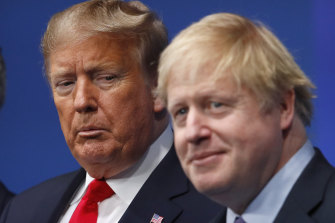 "As you'd expect, two statements were prepared in advance for the outcome of this closely contested election," the government said.

"A technical error meant that parts of the alternative message were embedded in the background of the graphic."

Johnson had a warm relationship with Trump, a supporter of Brexit, despite the two leaders' differences on major issues such as climate change and the Iran nuclear deal.

The message sent by Johnson on Saturday said: "Congratulations to Joe Biden on his election as president of the United States and to Kamala Harris on her historic achievement. The US is our most important ally and I look forward to working closely together on our shared priorities, from climate change to trade and security."

Johnson wasn't the only world leader to suffer a Twitter slip-up. Irish Prime Minister Micheal Martin tweeted on Tuesday that he had "just finished a very positive call" with Biden – then quickly deleted the message.

The Irish government said Martin had not yet spoken to Biden and the tweet had been sent in error.

Biden is proud of his Irish roots and has relatives in the country. In the Irish parliament, Martin said the President-elect was "the most Irish of Irish presidents since John F. Kennedy".

Understand the election result and its aftermath with expert analysis from US correspondent Matthew Knott. Sign up to The Sydney Morning Herald‘s newsletter here, The Age‘s here, Brisbane Times‘ here and WAtoday‘s here.