Twitter BANS 7,000 QAnon accounts and limits ability of 150,000 others as it cracks down on online harassment campaigns from the far-right group

Twitter announced Tuesday it would permanently suspend accounts that violate its policies while tweeting about QAnon, as it pushes through harsh measures to limit the spread of content about the conspiracy theory.

The company said it is acting following problems with misinformation and harassment from the fringe group that claims ‘deep-state’ traitors are plotting against President Donald Trump.

In the last several weeks, Twitter said it has removed more than 7,000 QAnon accounts for violating the company’s rules against targeted harassment, spam, platform manipulation and ban evasion.

However, the new policies on account suspension are expected to impact about 150,000 QAnon accounts globally, they added. 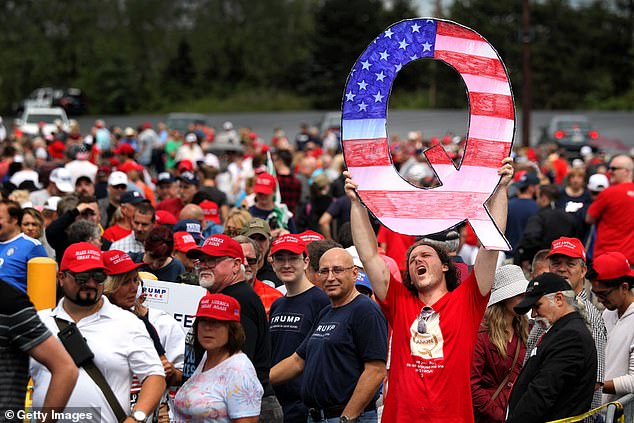 Twitter said it has removed more than 7,000 QAnon accounts for violating the company’s rules in the past weeks as it introduces further measures to take action against the fringe group

The social media platform, which announced the change on its Twitter Safety page, said it will no longer serve content and accounts associated with QAnon in trends and recommendations.

It means QAnon terms will no longer be appearing in trending topics or the platform’s search feature.

Twitter also said it would block URLs associated with the group from being shared on the platform.

And the act of ‘swarming’ people in a targeted campaign coordinated by its followers is banned.

The changes are to be rolled out this week.

While many of the new policies listed are already covered under Twitter’s existing platform manipulation rules, the social media site decided to move further with a special designation against QAnon.

The company said it was acting now because of rising harm associated with the conspiracy theory.

‘We’ve been clear that we will take strong enforcement action on behavior that has the potential to lead to offline harm. In line with this approach, this week we are taking further action on so-called “QAnon” activity across the service,’ the social media giant said in its tweeted statement.

The suspensions will be applied to accounts ‘engaged in violations of our multi-account policy, coordinating abuse around individual victims, or are attempting to evade a previous suspension – something we’ve seen more of in recent weeks,’ Twitter added. 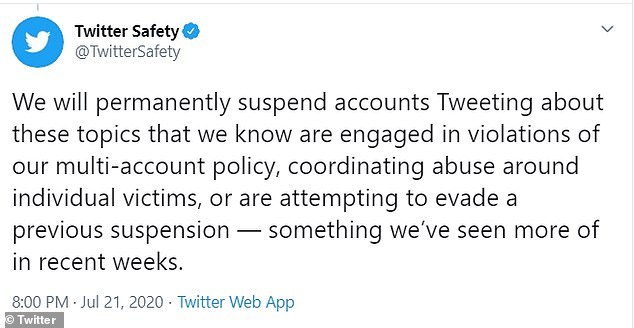 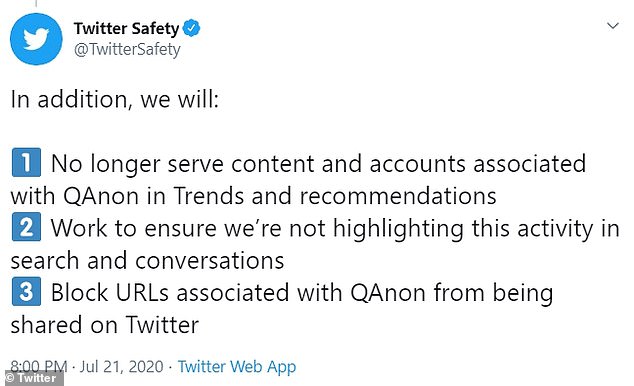 ‘We will continue to review this activity across our service and update our rules and enforcement approach again if necessary.

‘As we work at scale to protect the public conversation in the face of evolving threats, we’ll continue to lead with transparency and offer more context on our efforts.’

QAnon is known for advocating a far-right conspiracy theory alleging a secret, ‘deep state’ plot against President Trump and his supporters.

It alleges that Trump is leading a secret war against the so-called Deep State which includes many political, business and Hollywood elites.

It pushes the theory that the elites worship Satan, abuse and murder children, and engage in cannibalism.

There has yet to be any conclusive proof of these claims, initially made by an anonymous poster called Q on the 4chan website.

It has caused its followers to trawl through pictures celebrities post online to claim they show proof they are eating children and then mount a harassment campaign against them.

Among those often targeted is TV personality Chrissy Tegan who has been the victim of a type of campaign known as ‘swarming’ or ‘brigading’ that Twitter is now banning. 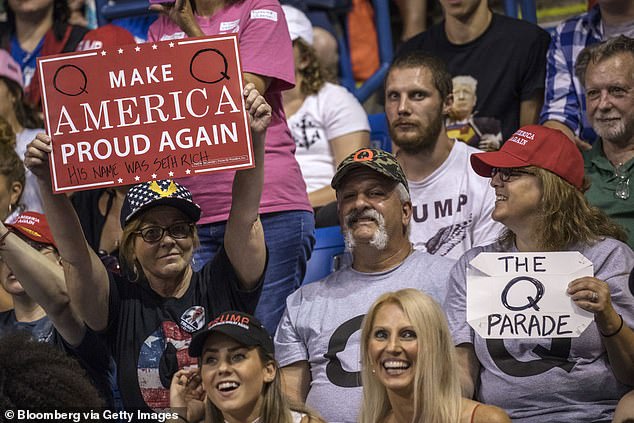 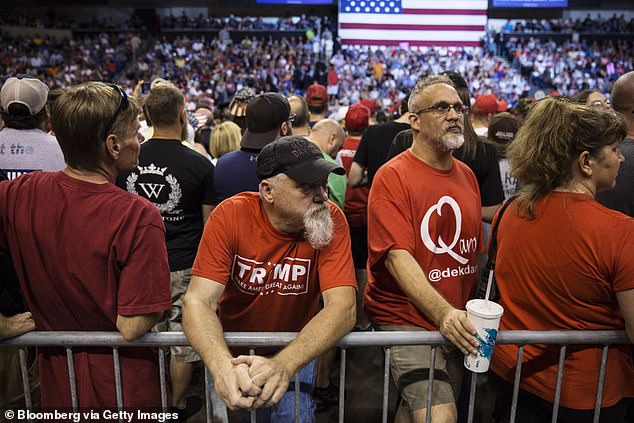 QAnon is known for advocating a far-right conspiracy theory alleging a secret, ‘deep state’ plot against President Trump and his supporters. Its supporters wear the letter Q on clothing

The company added that the rule could also apply to other groups such as QAnon who are primarily motivated by targeted harassment in the future, according to NBC.

However, as well as online harassment, the group has also been linked to a string of violent crimes including armed standoffs, attempted killings and at least one death.

Among the other conspiracy theories pushed, QAnon also claims Democrats are behind international crime rings.

The group had originally found its roots in Pizzagate, the theory that Hillary Clinton was running a a pedophilia ring from a Washington, D.C., pizza place. 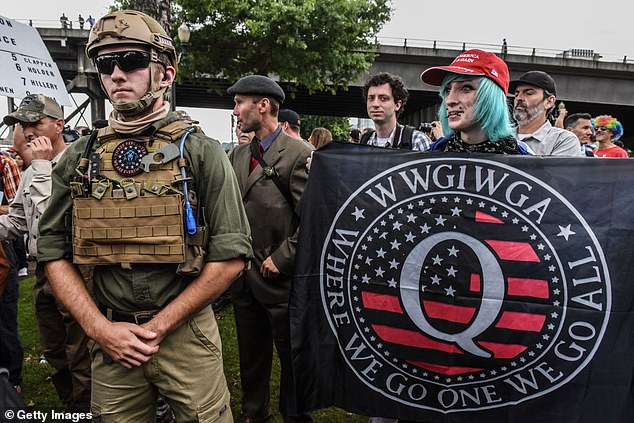 The group has steadily emerged into the mainstream from the far reaches of the internet. It alleges that Trump is leading a secret war against the so-called Deep State 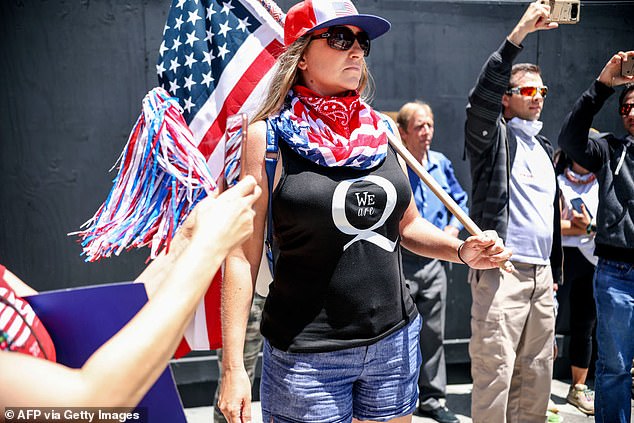 QAnon supporters believe the elites behind the ‘deep state’ worship Satan, abuse and murder children, and engage in cannibalism. They mount online harassment campaigns against them

Yet after October 2017, it began to rapidly emerge from the fringes of the internet to appear at Trump rallies, where supporters wore ‘Q’ merchandise.

Even Republican candidate for Congress began to publicly voice their support.

There are at least 50 Republican candidates running for public office who have either ‘endorsed or given credence’ to QAnon, including 11 who will be up for election in November.

Last week, the head of the NYPD’s second-biggest union was been spotted giving interviews with a QAnon mug placed prominently in the background.

NYPD Sergeants Benevolent Association president Ed Mullins was spotted at least twice in one week giving on-air interviews with a QAnon-emblazoned mug over his shoulder.

In the last few months, the coronavirus pandemic has allowed for the QAnon movement to gain even more momentum as they join with other online fringe groups such as the anti-vaccination movement.

Earlier in July, it targeted the company Wayfair and accused it of trafficking children after a price glitch on the company’s site raised the price of pillows and cabinets to tens of thousands of dollars.

Wayfair was trending on Twitter on July 10 and the conspiracy theory continued to rage on TikTok even after the company explained the pricing glitch.

Origins: Q Anon started on fringe website 4chan, where a poster calling themselves Q left messages claiming to be a senior federal official and purporting to reveal a ‘deep state’ cabal intent on bringing down Donald Trump. Q grew out of the discredited Pizzagate conspiracy that top Democrats were involved in pedophilia and cannibalism from the basement of a Washington D.C. restaurant, but quickly picked up steam with ‘Q’ leaving ‘clues’ and claims that Trump was going to bring down the deep state. Whenever the conspiracies turn out to not be true, followers rationalize that the inaccuracies are part of Q’s larger plan.

Who is Q?: There may now be multiple people posing as Q on the anonymous 4chan boards

A QAnon believer blocked the bridge near Hoover Dam with a homemade armored tank in the name of the movement, and later pleaded guilty to terrorism

Hoover Dam: In June 2019, 32-year-old Matthew Wright, a QAnon supporter, blocked the bridge near Hoover Dam in Arizona with a homemade armored vehicle in a 90-minute stand-off. He pleaded guilty to terrorism charges and has written two letters to Donald Trump from jail, which include the sign-off, which has become the QAnon motto: “For where we go one, we go all.”

Michael Flynn: Trump’s former national security adviser became a martyr figure for QAnon believers after he took a plea deal from Special Counsel Robert Mueller, admitting he lied about his Russia contacts. QAnon conspiracy have spun Flynn pleading guilty into him being a persecuted victim of the deep state – and some even claim he is ‘Q.’

Many believers put three star emojis next to their Twitter handles. But the retired three-star general has denounced any connections to the group and pulled out of participating in an event after finding out it was hosted by a QAnon believer.

QAnon Political Candidates: Jo Rae Perkins, 64, won the Republican primary in Oregon in May to run for a Senate seat against incumbent Democratic Senator Jeff Merkley. “I stand with Q and the team,” she said when asked about her interest in the group. She insisted she goes to QAnon message boards as a “source of information” and claims media focuses too much on the group. Perkins won 49 per cent of the vote against three other Republicans.

Marjorie Taylor Greene came in first place in the Republican primary in a deep-red Georgia district, and will enter an August runoff. She has admitted to believing in several QAnon conspiracy theories.