‘Everyone just ignores that he was one of the accused men last year? SURE OK’: Twitter lashes out at Ryan Seacrest as he sports a #TimesUp bracelet on the Globes carpet despite allegations of sexual harassment by his stylist last year

Ryan Seacrest, who was accused of sexual harassment at the end of the awards season last year, was on the carpet Sunday for the Golden Globes, sporting a #TimesUp bracelet.

Seacrest, whose choice of accessory was noticed by Twitter users who pointed out the irony that the E! News host was not only be wearing the bracelet but was also talking about it as he worked the carpet.

In February of last year, stylist Suzie Hardy came forward to Variety, alleging Seacrest had sexually harassed her when she worked for him in 2007 until 2013 when she says she reported his alleged behavior to human resource executives, and her employment ended.

Among her allegations she said he pushed his erect penis against her and groped her vagina. 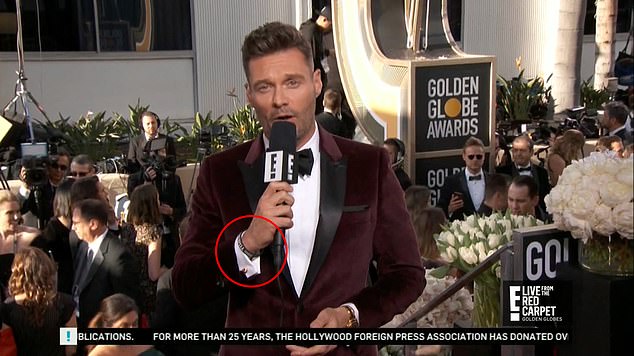 Ryan Seacrest, who was publicly accused of sexual harassment towards the end of the awards season last year, was on the first carpet of 2019 at the Golden Globes sporting a #TimesUp bracelet

This Twitter user lashed out at Seacrest sporting a #TimesUp bracelet

At the time that her allegations were made public, Seacrest issued a lengthy statement saying a third party had investigated her claims and that they were unfounded.

However, Hardy fired back saying NBC Universal, E!’s parent company, did not interview key people, including her boyfriend at the time and her therapist.

One Twitter user hit out during the Globes carpet Sunday saying: ‘Ryan Seacrest is wearing? A Time’s Up bracelet? While everyone just kinda ignores that he was one of the accused men last year? SURE OK.’

‘What gives Ryan Seacrest the ego to wear a #TimesUp bracelet? Does he think we forgot?’ tweeted another one.

Another person shared a link to the Variety article, drying commenting ‘Cool cool I guess we’re still ignoring this.’

‘HOW is Giuliana unironically talking about Time’s Up TO RYAN SEACREST,’ shared yet another. 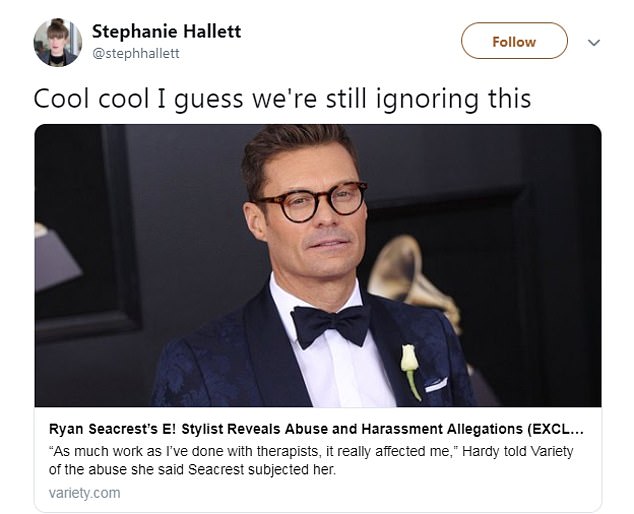 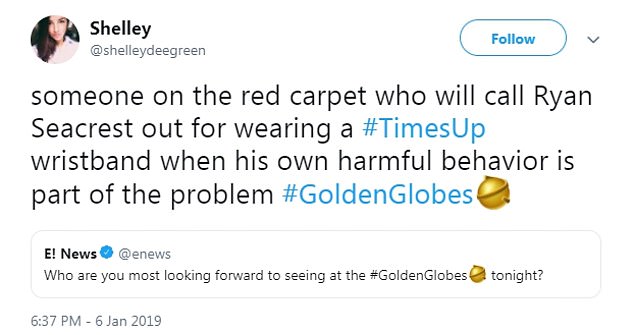 After E News asked who people were excited to see on the carpet, this Twitter user used it as an opportunity to rile up anyone who would point it out to Seacrest during the pre-show

‘Shout-out to Regina King’s son for reminding Ryan Seacrest that women need to feel safe in the workplace,’ another Twitter user wrote.

During last year’s Oscars red carpet, actress Taraji P. Henson hit out at Seacrest about the accusations against him.

‘The universe has a way of taking care of good people,’ Henson said to Seacrest. ‘Know what I mean?’

Around 117 migrants unaccounted for after dinghy sinks off Libyan coast