Two pupils are expelled and three suspended for dealing drugs in Britain’s oldest private boys-only school where annual fees are £29,000 a year

The boys were removed, and and three others suspended, from £28,758-a-year Warwick School following a two-week internal investigation.

The probe came after parents complained about cannabis, ecstasy and cocaine being dealt on the sprawling grounds of the school, which overlooks Warwick Castle.

In a letter sent to parents, headmaster Dr Deneal Smith confirmed five boys had been disciplined for using drugs in Year 11 and above. 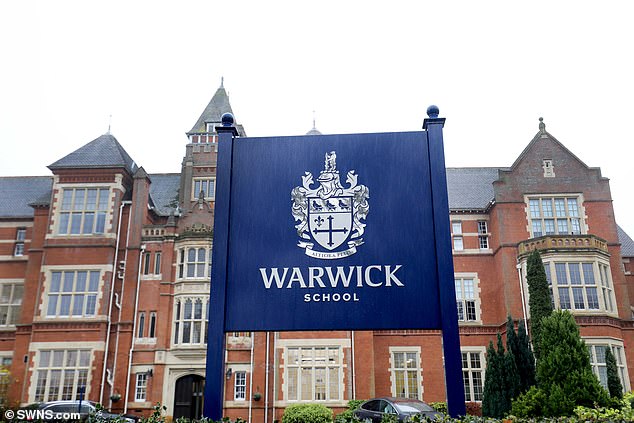 Two boys have been expelled and three others suspended afterWarwick Schoo, established in 914AD, discovered evidence of drug dealing on school grounds

Dr Smith said he had informed police, and that pupils were now being given additional counselling regarding the abuse of drugs.

The school’s PSHE Wellbeing (Personal, Social, Health and Economic) lessons are also under review, to teach pupils about the dangers of drugs.

Staff at the school, which caters for 1,245 boys aged 7-18, and whose Latin motto Altiora Peto translates as ‘I seek higher things’, were being taught how to spot signs of drug abuse.

Dr Smith said an internal investigation was launched two weeks ago after parents came to him with ‘specific concerns’ about certain pupils being involved with drugs.

The letter said: ‘It is, sadly, not unusual these days to be told of a small number of young people using drugs outside of school at weekends, but we have uncovered stories of individuals exchanging drugs within the school. These have been verified.’ 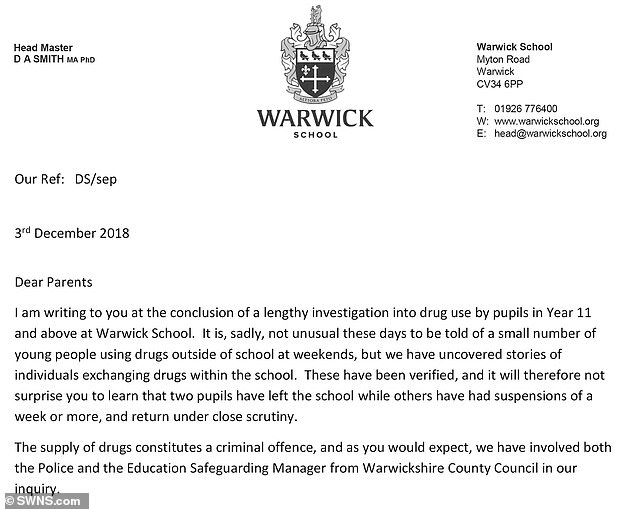 The letter to parents, from headteacher Dr Deneal Smith, confirmed that ‘stories of individuals exchanging drugs within the school’ had been verified 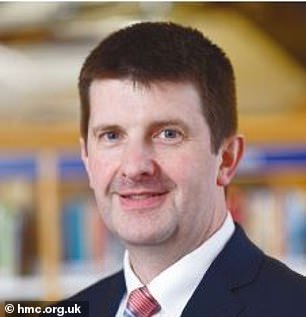 Two boys have now been expelled while three others have been suspended for a week. When the three return they will be subject to random drug tests.

Dr Smith also revealed that some parents were taken aback at the news.

He wrote: ‘Some of the parents I have spoken to were taken completely unawares – others look back with hindsight and recognise something was amiss, but didn’t believe their sons could be involved in this type of behaviour.’

The school, first established in 914, charges boarders up to £9,586 per term and counts several MPs, judges, diplomats and police chiefs among its alumni.

The Apprentice star Lady Karren Brady has also regularly tweeted about her teenage son Paolo playing rugby for the school.

There are schools with earlier founding dates in England, but they are either co-educational now, or in one case – Beverly Grammar School in Yorkshire – state schools.  Warwick is believed to be the oldest boys public school in the world.

One Warwick parent claimed the problems with drug use had been raised with the school for some time but staff had ‘turned a blind eye.’

They said: ‘Sadly, drugs are available in the school if you know the pupils to approach. 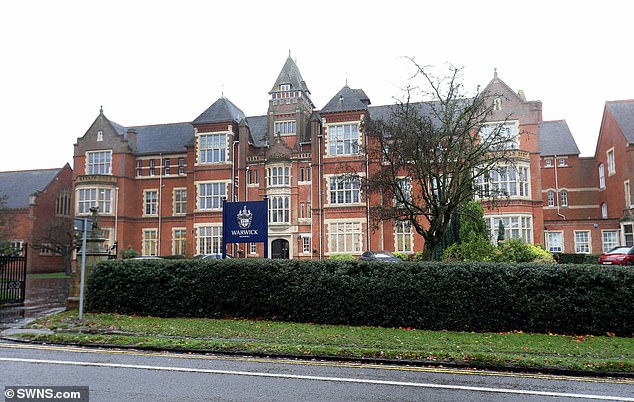 The school, which overlooks historic Warwick Castle, is one of the oldest in the world. Its motto translates as ‘I seek higher things’

‘I suspect staff are probably looking at who the parents of these boys might be and make a judgement over whether it be best to investigate or turn a blind eye.

‘It is a relief the school have at least taken the issue seriously. Whether this acts as a deterrent to other boys selling these substances remains to be seen.’

Dr Smith said: ‘I decided it was important to write to parents about this – my letter makes it clear that when parents come forward to talk about these things we will be trying to support them.

‘I don’t think it’s fair to say the school has turned a blind eye. When we’ve had specific information, we’ve acted on it and dealt with it.

‘In pretty much every school, there is going to be a small minority who get involved in drugs. Here in Warwick School, we get involved and we’re dealing with it.

‘The welfare of our pupils is absolutely paramount and we will always offer support.’