U.S. rejoins Paris climate accord just 107 days after it left as Biden continues to reverse Trump’s legacy after nation became the first to formally withdraw from the pact under his leadership

The United States is back in the Paris climate accord, just 107 days after it left.

Its return became official Friday, almost a month after President Joe Biden told the United Nations that America wants back in.

‘A cry for survival comes from the planet itself,’ Biden said in his inaugural address. ‘A cry that can´t be any more desperate or any more clear now.’

Donald Trump announced its withdrawal from the Paris accord in 2019 but it didn’t become effective until November 4 last year – the day after the election – because of provisions in the agreement.

That made the US the first nation to formally withdraw from the Paris climate agreement.

Biden signed an executive order on his first day in office reversing the pullout ordered by his predecessor. 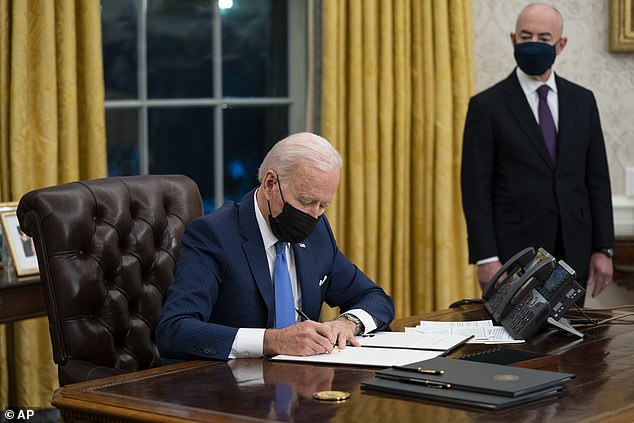 The United States is back in the Paris climate accord, just 107 days after it left. Biden signed an executive order on his first day in office reversing the pullout ordered by his predecessor 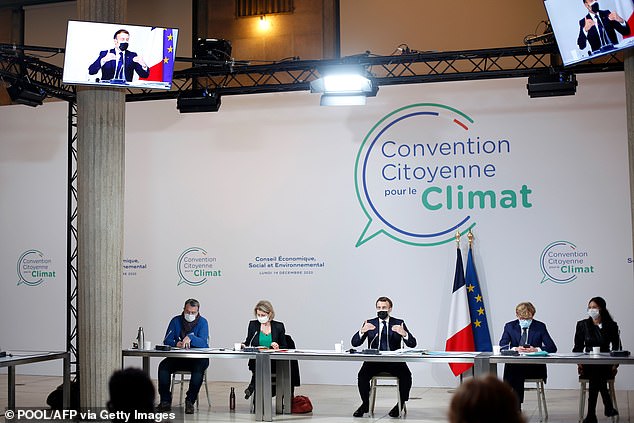 A longtime international goal, included in the Paris accord with an even more stringent target, is to keep warming below 2 degrees Celsius since pre-industrial times. The world has already warmed 1.2 degrees Celsius since that time. French President Emmanuel Macron, center, delivers a speech during a meeting with members of the Citizens’ Convention on Climate (CCC) about their proposals to fight against global warming, in Paris on December 14, 2020

Scientists say that any rise beyond 2 degrees Celsius could have a devastating impact on large parts of the world, raising sea levels, stoking tropical storms and worsening droughts and floods.

The Paris accord requires countries to set their own voluntary targets for reducing greenhouse gases such as carbon dioxide. The only binding requirement is that nations have to accurately report on their efforts.

But Trump told world leaders at a virtual summit in November that the agreement was designed to cripple the U.S. economy, not save the planet.

‘To protect American workers, I withdrew the United States from the unfair and one-sided Paris climate accord, a very unfair act for the United States,’ Trump said in a video statement from the White House to the Group of 20 summit hosted by Saudi Arabia.

While Friday’s return is heavily symbolic, world leaders say they expect America to prove its seriousness after four years of being pretty much absent.

They are especially anticipating an announcement from the U.S. in coming months on its goal for cutting emissions of heat-trapping gases by 2030.

United Nations Secretary-General Antonio Guterres said Thursday that the official American re-entry ‘is itself very important,’ as is Biden´s announcement that the U.S. will return to providing climate aid to poorer nations, as promised in 2009.

‘It´s the political message that´s being sent,’ said Christiana Figueres, the former United Nations climate chief. She was one of the leading forces in hammering out the 2015 mostly voluntary agreement where nations set their own goals to reduce greenhouse gases. 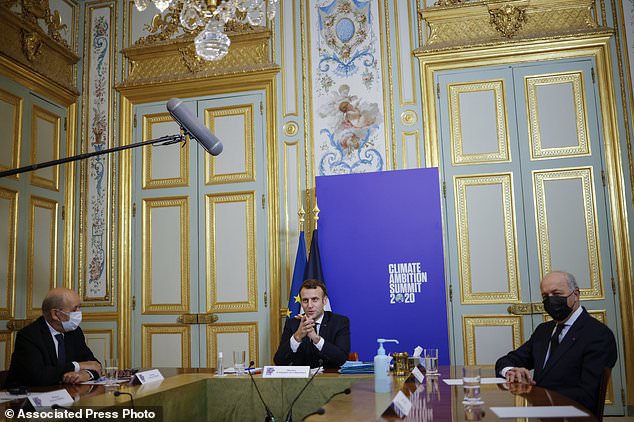 One fear was that other nations would follow America in abandoning the climate fight, but none did, Figueres said. She said the real issue was four years of climate inaction by the Trump administration. American cities, states and businesses still worked to reduce heat-trapping carbon dioxide, but without the federal government.

‘It´s not about how many days. It´s the political symbolism that the largest economy refuses to see the opportunity of addressing climate change.’

United Nations Environment Programme Director Inger Andersen said America has to prove its leadership to the rest of the world, but she said she has no doubt it will when it submits its required emissions cutting targets.

The Biden administration promises to announce them before an Earth Day summit in April.

‘We hope they will translate into a very meaningful reduction of emissions and they will be an example for other countries to follow,’ Guterres said.

Already more than 120 nations, including No. 1 emitter China, have promised to have net zero carbon emissions around midcentury. 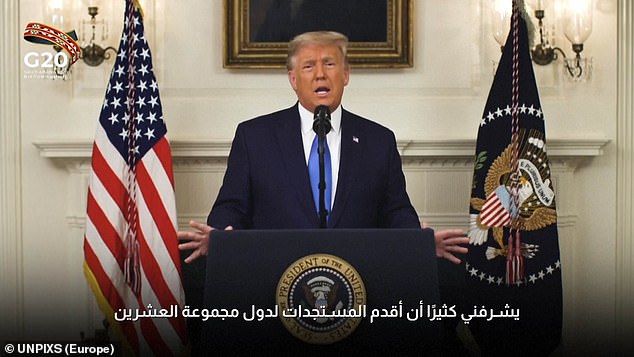 President Donald Trump railed against the Paris climate accord last November during the virtual G20, saying that the climate agreement, which President-elect Joe Biden plans to rejoin, was designed to destroy the America economy

University of Maryland environment professor Nate Hultman, who worked on the Obama administration´s official Paris goal, said he expects a 2030 target of cutting carbon dioxide emissions between 40% and 50% from the 2005 baseline levels.

Wyoming Sen. John Barrasso, the top Republican on the Senate energy panel, has criticized Biden for rejoining Paris, tweeting: ‘Returning to the Paris climate agreement will raise Americans´ energy costs and won´t solve climate change. The Biden administration will set unworkable targets for the United States while China and Russia can continue with business as usual.´´

The U.S. rejoining the Paris accord and coming up with an ambitious target for emissions cuts would make limiting warming ‘to well below 2 degrees – not just to 2 degrees but below 2 degrees – a lot more likely,’ said climate scientist Zeke Hausfather, energy and climate director for the Breakthrough Institute.

Map shows a third of world's population are under coronavirus lockdown