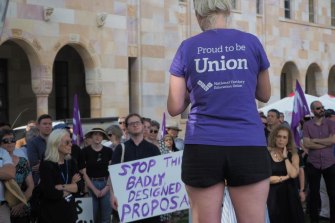 NTEU rallies like this recent one in Queensland have been held nationally, protesting university restructures that have come at the cost of jobs. However, WA has remained largely quiet.

The unions that ought to have lashed out as a higher education sector crisis cost tens of thousands of university jobs have instead sat eerily silent in Western Australia while Labor’s stronghold over the state tightened.

And this is at a time when a federal election looms.

But a once-in-a-decade stoush is brewing at the WA chapter of the National Tertiary Education Union, which represents academics, over the conservative Labor leanings that have potentially silenced statewide action.

It has left a lone student guild at Perth’s biggest university, Curtin, as the sole dissenting voice to take recent action on behalf of staff.

Even Perth’s almost Labor prime minister and once student activist, Kim Beazley, has noted the lack of student demonstration in recent years. 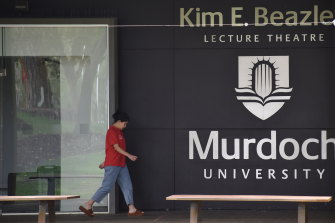 Dr Beazley’s name is etched on a now defunct local lecture hall which has become a symbol in WA of a conflict between university executives on one side, and academics and students on the other.

It has highlighted how some universities used COVID-19 restrictions to fast-track their own “transformational education” agendas and have seen off critics, with very little visible union opposition.

Nationally about 37,000 highly skilled academic jobs have been slashed by the lack of JobKeeper and billions in budget cuts brought on by the pandemic.

Institutes have been encouraged to turn to industry to fill funding gaps after diminished federal government support, despite weathering up to $18 billion in predicted foreign student losses from closed borders and a further 20 per cent in revenue cuts in real terms from education reforms.

In WA, four out of its five universities will cut a combined $120 million in jobs by the middle of next year, with some undergoing some radical shake-ups.

The state’s richest tertiary institute and Group of Eight member, the University of WA, has so far weathered the COVID-19 storm to remain $55 million in the black but will still look for $40 million in job restructures.

WA’s largest and smallest publicly-funded universities – Curtin and Murdoch – are proposing re-writes of education for a digital world that could minimise the number of people needed on campus.

“[The NTEU is] much more interested in overseeing the kind of slow decline in a reasonably peaceful way … and I think they see their job is, maybe, more about managing that decline rather than heading it off,” he said.

“It is really sad because Australian education was in a very strong position … and now it just looks terrible. And so it’s been a very rapid decline and a very destructive decline.” 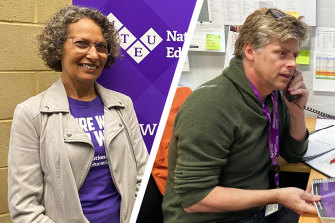 Dr Kerr believes things need to change radically and is contesting WA’s secretary seat for the first time in the union’s history.

“NTEU continues to fight for every single job,” she said.

“It’s not glamorous or cool, and it doesn’t end up on the front page of the paper, but we sit in dispute meetings day after day making the argument on behalf of each and every one of our members.

She said the NTEU successfully fought back attacks by Curtin and Murdoch senior executives to strip staff of pay and conditions through unilateral changes to enterprise agreements last year.

“Murdoch sued a previous division secretary (twice) and an NTEU staff member during the last round of bargaining, including for organising protests against their disgraceful decision to apply to have the Murdoch enterprise agreement terminated,” she said.

She called Murdoch one of the most litigious universities in Australia.

Dr Moore’s vision is for a sector where teaching, learning and research can be carried out without fear or favour and vital work is achieved in a sustainable way, without exploitation.

“Universities are the natural ideological enemy of conservative governments because they encourage freedom of inquiry and challenge traditional norms,” Dr Moore said.

“So it was no surprise that the federal government changed the JobKeeper rules three times to keep universities out. And thousands of job cuts resulted.”

But WA labour historian and industrial relations academic Alexis Vassiley also questioned the NTEU leadership response in negotiating a “jobs protection framework” that cut pay up to 15 per cent in return for more job security that didn’t eventuate.

“This is an approach whereby rather than organising and mobilising workers, it’s one of essentially being being co-partners with management in managing revenue reductions,” he said.

As a unionist and former student activist himself, Mr Vassiley questioned the politics behind the lack of mobilisation from multiple unions representing those in higher education.

“In the National Union of Students, you have Labor students in the key leadership positions that don’t want to rock the boat, particularly when Labor’s in government,” he said.

“But even when they’re not, they’re not using infrastructure of student unionism to mobilise students.

He said there was power in mass demonstrations by students and workers, as the pages of history have shown. 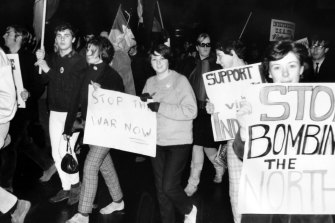 Dr Beazley was a student activist at UWA during the global era of protest in the late 1960s.

He reflected on a strong WA student union movement far more closely tied to the political ambitions of the Labor party compared to other states.

“The main difference being that the east coast clubs were Maoist, Marxist and communist, whilst in WA it was more a branch of the Labor Party whose main aim and objective was to win an election and whose main cause was focusing on the Vietnam War,” he said.

By 1972, the Liberal-Country coalition lost office – after 23 years in power – over the rising domestic revolt to the Vietnam War and conscription.

And while Labor’s successor, Gough Whitlam, withdrew Australian troops and opened up higher education to more students by making it free, he also set universities on a course that made them entirely dependent on the Commonwealth.

Dr Beazley continues to believe in the “useful” power of a student voice but notes that “it does not seem so loud these days”. 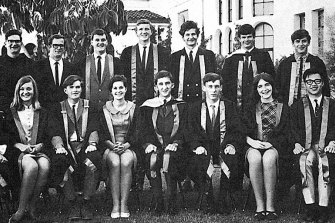 Kim Beazley, on UWA Guild’s Council of Undergraduates in 1969, second from the left at the front.Credit:UWA Pelican

In his student days, he also campaigned for better student representation on university governing bodies.

Yet that hard-fought student right has been watered down, as have academics’ power, by a series of decisions that has corporatised university governing structures.

And WA’s current Labor government, which has shown itself to be more business aligned, is proving no friend to the uni worker as it “has a collaborative relationship” with the vice chancellors of the state’s five universities through the WA Higher Education Council.

“WA universities continue to adapt to the challenges of the last year,” a state government spokesperson said.

Dr Kerr isn’t convinced protests will be listened to in the current climate but agrees a stronger show of force is needed and is campaigning to build an “activist culture” and organisational infrastructure for the NTEU in WA to protect members from overwork, underpayment, and precarious employment.

“One of the big problems we have, is a kind of complacent style of management of institutions in Australia that’s much more to do with old school networks, or political networks or business political networks that have very little empathy,” Dr Kerr said.

Dr Kerr says it is a multibillion-dollar system stacked against students, who face courses being cut if they’re not profitable, fees rising for money-making courses and the end of face-to-face lectures.

“One of the really disturbing things about the education reforms is that it seems that our former vice chancellor, and I expect several other vice chancellors, actually supported these reforms,” Dr Kerr said.

“So the trouble for students and staff is that we’re often not just taking on federal government in challenging issues, we’re having to challenge our own management as well.”

Police are seen cracking down on commuters not wearing face masks