Up to 100 migrants were brought ashore by Border Force officers today after they took advantage of the calmer waters to cross the English Channel.

Emergency teams intercepted around seven boats earlier this morning before the  group of migrants, many of whom were men, were brought into the port of Dover in Kent.

The Home Office is yet to confirm exactly how many made the 21-mile crossing today but more than 7,400 migrants have made the dangerous Channel dash to reach the UK by small boat so far this year, according to official figures.

The scenes come as the UK saw temperatures reach as high as 91F today on what is expected to be the hottest day of the year so far. 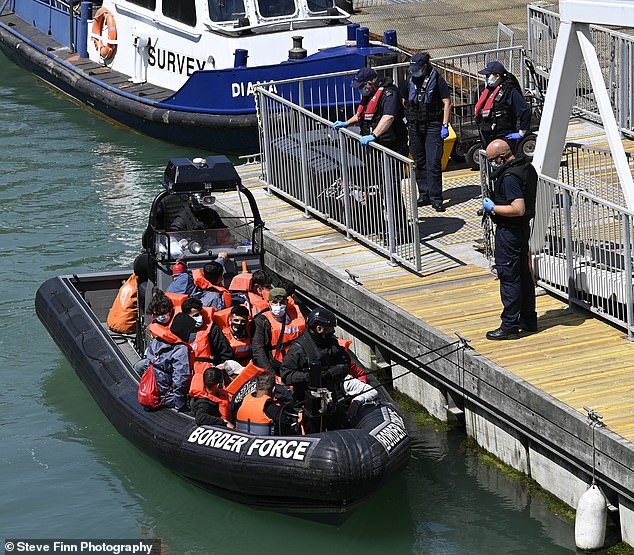 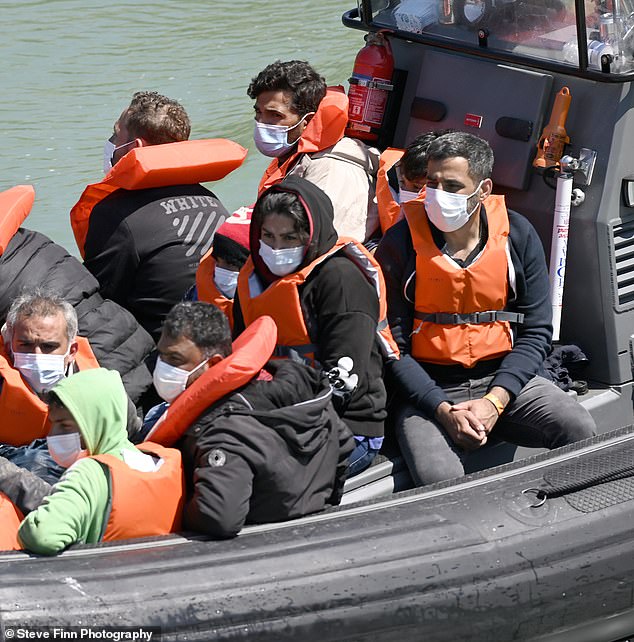 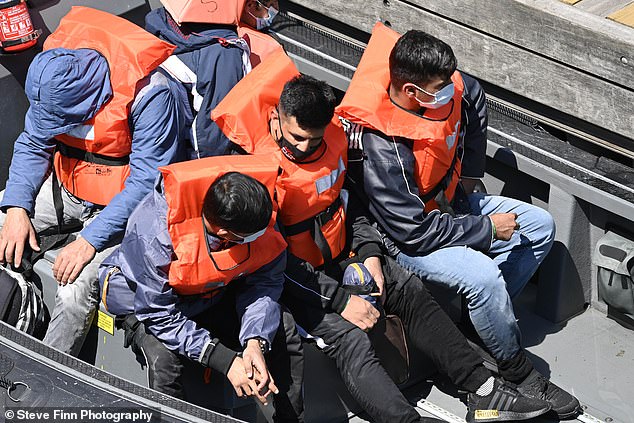 This week figures showed the total number of migrants to have been detained by Border Force so far this year reached 7,478, less than 1,000 short of the 8,410 who arrived last year.

But the number is expected to rise with more warm weather forecast in the days and weeks ahead which will make crossings easier.

Last Sunday, 346 people were detained by Border Force Officers in 15 inflatables – the largest number to arrive in a single day so far this year. And on Monday a further 254 migrants were picked up in nine separate incidents.

Among those making the treacherous crossing was a young girl wearing a pink rain jacket over her life jacket and a woman, believed to be her mother.

It came after a dramatic rescue was launched last Sunday after two people fell off a rigid hulled inflatable boat and into the freezing cold sea.

An RNLI inshore lifeboat had to be launched to save them and fortunately they were both wearing lifejackets.

The voluntary crew of the Ramsgate lifeboat towed the drifting rib, packed with around 20 migrants, into Ramsgate harbour in Kent where Border Force officers were waiting for them.

Following the incident, an RNLI spokesman said: ‘The Ramsgate inshore lifeboat launched at 10.10am this morning following reports that there were two people in the water.

‘Two people, who were wearing lifejackets, were rescued from the water and the rib, from which the casualties had fallen, was towed into Ramsgate and the relevant authorities informed.’

In another incident, pictures posted on social media showed around 15-20 migrants apparently coming ashore near Folkestone, Kent after arriving on an inflatable last week. 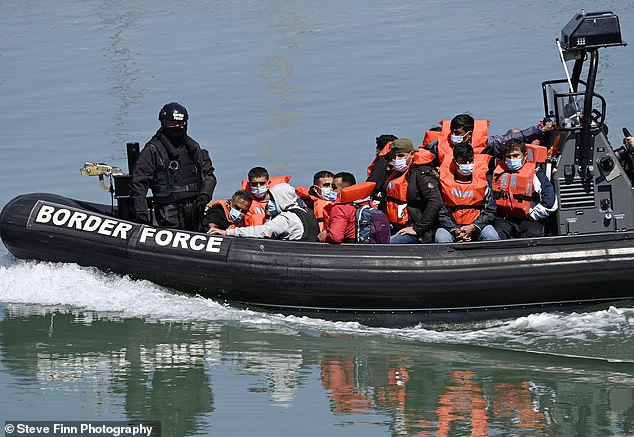 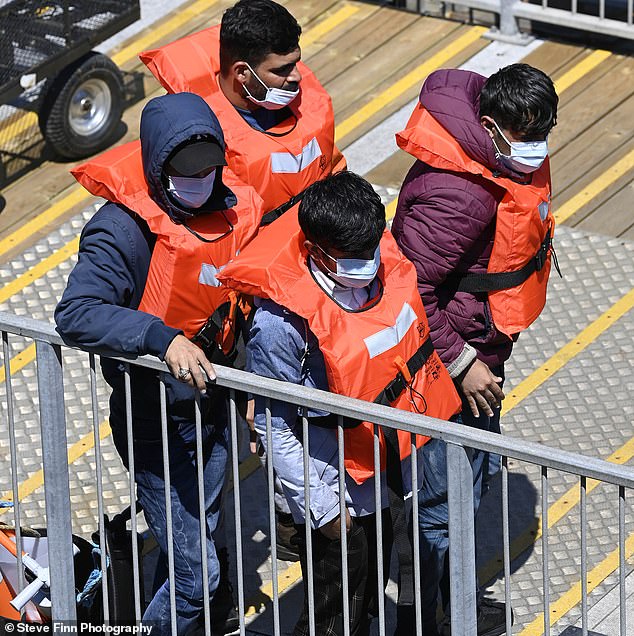 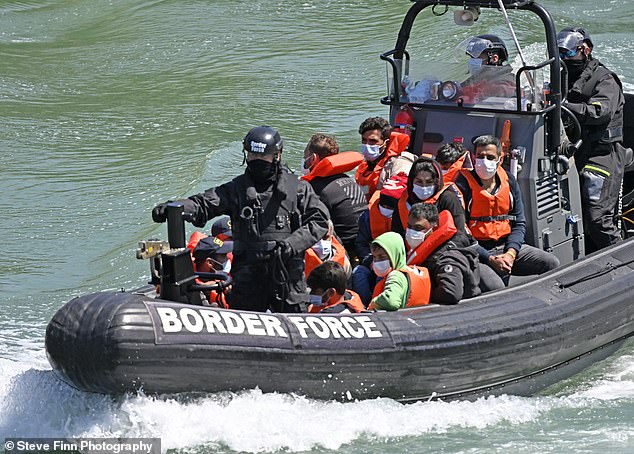 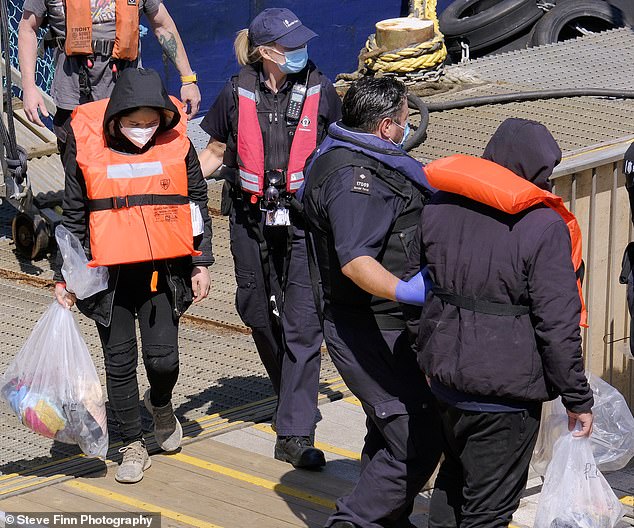 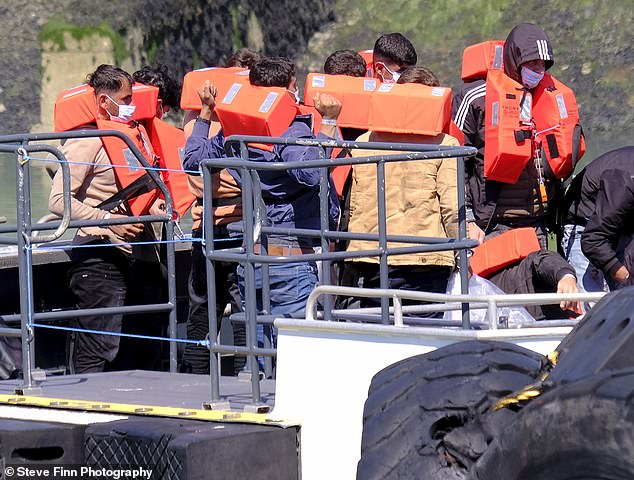 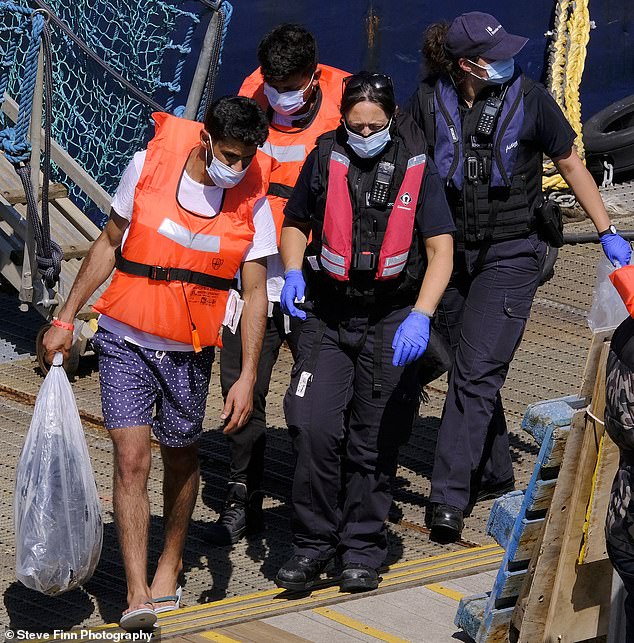 A further 131 were intercepted by French authorities before they could reach British waters last Saturday.

It comes as Home Secretary Priti Patel announced plans to make it a criminal offence for migrants to attempt to enter the UK without valid entry clearance this month.

The Borders Bill will attempt to deter illegal entry and crackdown on people smuggling gangs. It was introduced this month after June saw more migrants cross the Channel by small boat than in any month ever before.

The Government is also proposing to increase the tariff for people smugglers, with those found guilty facing life behind bars – up from the current maximum of 14 years.

‘We will welcome people through safe and legal routes whilst preventing abuse of the system, cracking down on illegal entry and the criminality associated with it.’ 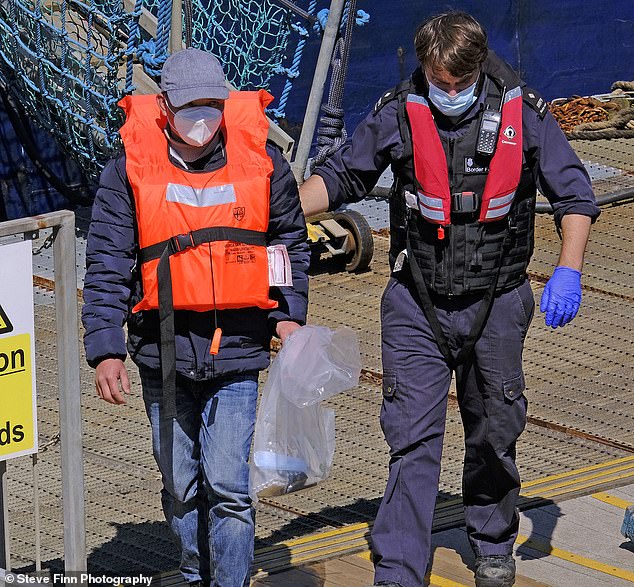 A person arrives to the port in Dover, Kent, after crossing the English Channel earlier this morning 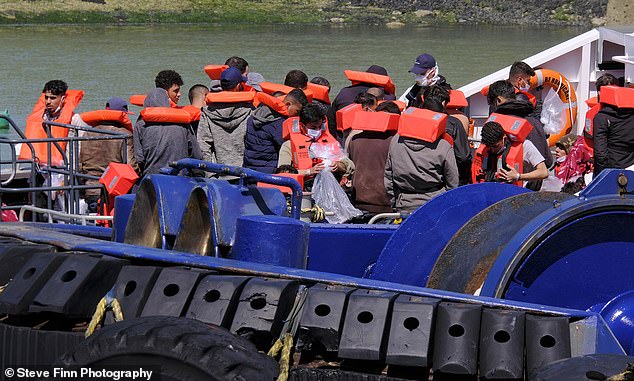 ‘That’s why we continue to target the criminal gangs who are responsible for these illegal crossings at every level. We have doubled the number of police officers on the ground in France, leading to more interception and arrests of those behind this cruel trade.

‘But there is more to do, that’s why our new plan for immigration will break the business model of these criminal gangs whilst welcoming people through safe and legal routes.’