Veteran broadcaster David Dimbleby considers bid to become next BBC chairman to thwart No.10’s plan to potentially install an arch-critic at the corporation

David Dimbleby is considering throwing his hat in the ring to become the next BBC chairman, it emerged last night.

The veteran broadcaster said he was prepared to make a bid if Downing Street attempts to parachute in an arch-critic of the corporation.

In a broadside at Boris Johnson he said he was ‘horrified’ after reports No 10 wanted to give the job to Charles Moore, former editor of the Daily Telegraph.

Mr Dimbleby claimed the appointment would have been ‘a malign intervention’. 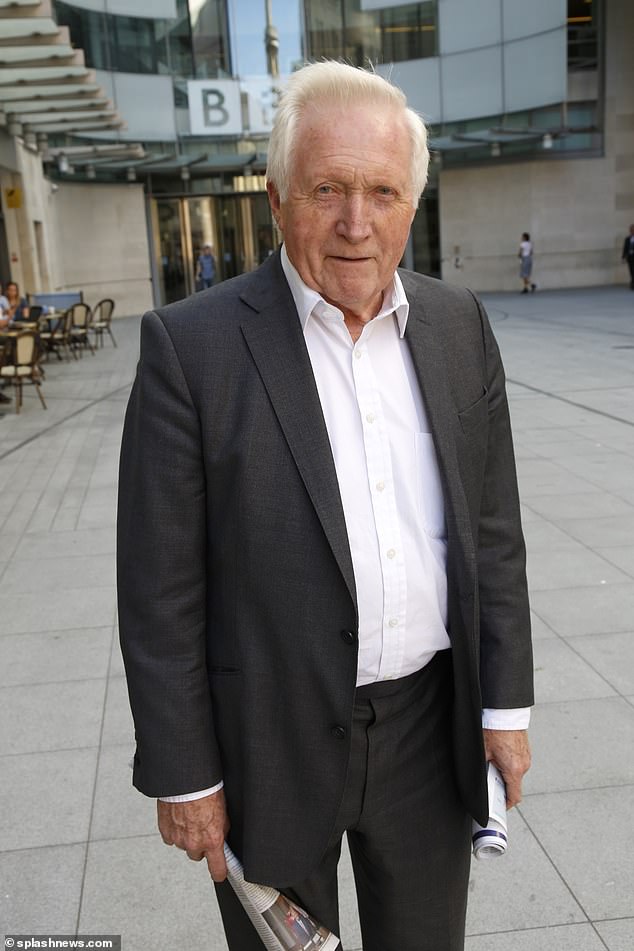 Citing Lord Moore’s newspaper and magazine columns on gay marriage and race, which have caused controversy, the former Question Time host said: ‘I think you need someone with a more open mind.’

Lord Moore has since confirmed he is not applying for the role. But 81-year-old Mr Dimbleby made it clear he was keeping his options open should another candidate emerge who he thinks would be a threat to the BBC.

He told the BBC’s Newscast podcast: ‘I still might [apply], depending on who comes forward. Boris Johnson, we know, wants to bring the BBC to heel. We don’t want a chairman who connives in that ambition.’

Pressed on why he opposed Lord Moore, he said: ‘I was horrified…not because of his political views, but because he hates the BBC.’

He added: ‘No politicians have ever liked the BBC, the BBC is a thorn in the side of government and that’s its job and therefore it’s always disliked by governments.

He conceded Downing Street would be unlikely to appoint him, but went on: ‘I didn’t want somebody with Charles Moore’s views, as I’ve read them over and over again in the Telegraph and Spectator, his views on gay marriage, his views on race relations, to become chairman… his appointment as chairman would have been a malign intervention by the Prime Minister and I’m glad it fell apart.

‘You want somebody in charge of the BBC who is sympathetic not to the BBC as an institution but the idea of the BBC, to the concept of the BBC as reflecting the whole sort of richness of British life.’

Lord Moore was fined for refusing to buy a TV licence in protest at the BBC’s refusal to sack Jonathan Ross after he and fellow Radio 2 presenter Russell Brand left obscene messages on actor Andrew Sachs’s answerphone in October 2008.

The arch-critic of the BBC also accused it of being biased on Brexit and once wrote in the Spectator that the corporation has ‘to learn not to call the thought police as soon as any person or topic they suspect of being right-wing enters the studio’.

David Clementi, the current BBC chairman, is to step down in February. The part-time job is appointed by the Government and comes with the power to fire the director-general. Mr Johnson favoured Lord Moore to fill the role.

California first state to require all teachers, school staff to get vaccinated or tested weekly