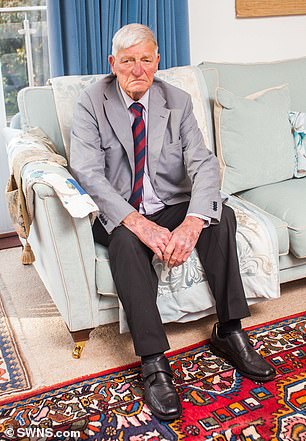 Dennis Hutchings (pictured), 77, is facing charges of attempted murder and attempting to cause grievous bodily harm over the fatal shooting of John-Pat Cunningham, 27, in June 1974

A frail Army veteran who is being prosecuted over the death of a man during the Troubles has suffered a heart attack.

Dennis Hutchings, 77, said the stress of the court case had contributed to the potentially life-threatening heart attack.

The retired soldier, who is already seriously ill with kidney failure, suffered chest pains while driving with his wife last week.

He was treated at Derriford Hospital, Plymouth, and discharged after being kept in for five days.

Mr Hutchings, a former corporal major with the Life Guards, is facing charges of attempted murder and attempting to cause grievous bodily harm over the fatal shooting of John-Pat Cunningham, 27, in June 1974.

It later emerged that Mr Cunningham, who was shot while running from an Army patrol in Co Tyrone, was innocent and had the mental age of a child.

The Police Service of Northern Ireland has sparked anger by re-examining every Army killing. The Daily Mail has long campaigned for an end to the hounding of our troops.

The great-grandfather said: ‘We were driving home after lunch and I felt a tightening in my chest.

‘I thought it was indigestion but it was getting worse and worse so I drove to a local hospital.

‘Next thing I knew they were putting me in an ambulance. It has been pretty rough. The strain I have been under has definitely contributed to the heart attack.

‘But I worry about the other old soldiers who are being pursued. They might not be able to cope with it like I have.

‘This ordeal has been terrible for my health. The Government has completely washed its hands of us. We risked our lives for the country and they have thrown us to the lions.’ 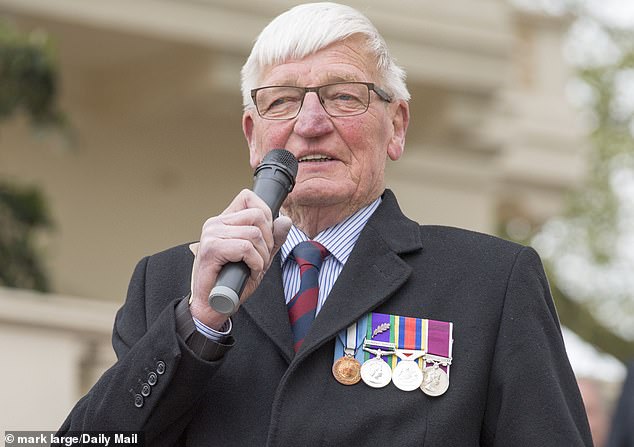 Mr Hutchings is a former corporal major with the Life Guards. He is seen here last year at a rally held by former soldiers protesting against a witch-hunt against former soldiers that have served in Northern Ireland during the troubles

Truck skids off road and plows into family's living room

Houston men charged in killing of New Orleans detective; ‘Death is on the table,’ officials say