The COVID-19 crisis has made 2020 a year of suspended animation for businesses, families and projects across Victoria, with one very notable exception. With the state and particularly its capital stilled, all eyes have turned to the figures of the Premier and his health officials, whose daily performance determines the course of our day and our conversation in a way that would once have been unthinkable for all but the most hardened political junkies. 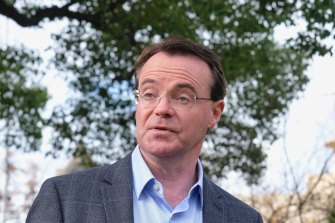 Does this strange new focal point in our lives change the way we view our leaders? Polling carried out by Ipsos for The Age between October 19 and 21 suggests that the Victorian public gives Daniel Andrews the benefit of the doubt in the face of the greatest public health challenge in a century, with 52 per cent of those polled expressing satisfaction with the way he has performed his role and 33 per cent dissatisfied.

The question of blame for the state's second wave of COVID-19 and the ensuing second lockdown might indicate a more troubling trend, with a majority of Labor voters pointing the finger at individuals breaking regulations and Coalition voters citing the failures of the government's hotel quarantine regime.

As Osman Faruqi wrote recently for this newspaper, the failures of hotel quarantine and its role in the second wave have been extensively reported despite the government's efforts at evasion. Partisanship that prevents us accepting those facts and from demanding accountability for them should be guarded against, especially at a time when – for perfectly understandable reasons – we are looking to the government more than usual for solutions.

The spotlight on Mr Andrews and his team also makes it more difficult than usual for the state's opposition to win the public's attention, but the polling suggests that Liberal leader Michael O'Brien is struggling with more than a simple lack of publicity. The Victorian public may have been evenly divided on a number of key questions surrounding the lockdown – with the split close to even on continuing closures of shops and restaurants – but on the opposition's performance the story was very different.

Only 16 per cent of those polled were satisfied with the opposition's response to the pandemic, with 44 per cent registering dissatisfaction. The numbers were similar for Mr O'Brien himself (15 per cent to 39 per cent) and even Coalition voters were dissatisfied on balance (25 per cent to 30 per cent).

A few days before this poll was carried out, Mr O'Brien had set out for us a detailed vision of how the government's response might be different, but elsewhere the hectoring and at times hyperbolic tone of the opposition's commentary has eaten away at the credibility of its arguments. When state Liberal leaders are seen as tag-teaming with federal colleagues against the state government, the effect on public opinion can be even more negative, as Mr O'Brien's predecessor Matthew Guy discovered during his attempts to generate uproar over “African gangs” and the ham-fisted intervention of three federal ministers into debates around Victoria's courts.

Our latest polling lends weight to the view that the opposition needs a different approach to cut through. With Monday's welcome news of reopening and the state's first day of zero new cases since June 9, Victorians have genuine cause for optimism. They will be looking to political leaders for hopeful and constructive messages about the days, weeks and months ahead, not angry denunciations and social media feeding frenzies. The government deserves to be held to account for its errors and we deserve an opposition that can do so without rancor. That's a new normal worth pushing for.

Investigators revise cause of escape room fire that killed 5 girls

Iran Says US Presence In Syria Was 'A Mistake, Illogical, And A Source Of Tension'