Victoria’s public debt is set to reach nearly $155 billion within four years, Tuesday's budget papers will reveal, as the Andrews Labor government pursues an aggressive program of borrowing and spending in an effort to power the state out of its COVID-19 induced recession.

Treasurer Tim Pallas said on Friday that the huge deficit would reduce to $13.1 billion in 2021-22, then to $6.7 billion the following year, predicting the economy would recover from the pandemic and government spending would return to "more normal levels". 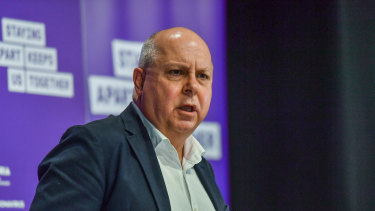 Economists, industry and even the governor of the Reserve Bank of Australia are encouraging states to use record low interest rates to borrow up big and spend their way out of economic trouble.

The big spend has been under way for some time with the government, which had revenues of about $68 billion this year, already announcing spending of more than $13 billion just on battling the virus and its knock-on effects.

The government has pre-announced more than $12.5 billion in new spending that will be included in the budget, to be delivered on Tuesday. Mr Pallas said the budget papers would also show that state tax revenue had fallen nearly 12 per cent compared with 12 months ago.

Mr Pallas, who says the government will spend $19.6 billion annually on infrastructure building in the next four years, says that borrowing heavily to repair the economic damage wrought by COVID was the right policy.

“We’re using the strength of our balance sheet to repair the hardship caused by coronavirus on families, workers and businesses,” the Treasurer said.

“We’re following the blueprint of jurisdictions around Australia and the world, who are using their own budgets to protect household and business budgets.”

RMIT economics professor David Hayward said the big jump in Victoria's net debt would bring bring it back to levels not seen since the last years of the Cain-Kirner Labor government in the early 1990s.

“There isn’t going to be an outcry like there was then,” Professor Hayward said. “People are going to applaud whereas back then they said ‘this is awful, the world is ending’."

But the Treasurer and his officials have a difficult job framing a budget, essentially a large set of economic projections, amid such uncertainty, particularly around Victoria’s population growth, which was the driver of the state’s economy before it ground to a standstill amid the closed borders and lockdowns.

“There are so many unknowns, they’ll be pinning their hopes on a vaccine which you’d have to say is looking pretty good, but then there’d be assumptions about the rollout and the takeup of the vaccine,” Professor Hayward said.

“For Victoria the key thing is population growth and in that is the return of international students.”

There was another echo on Friday of the Cain-Kirner years, when official ABS data showed the Victorian economy, as measured by the gross state product index, shrinking for the first time since 1992.

The data, which only covers the 12 months to June, and unemployment figures published on Thursday which show the states’ jobless rate up to 7.4 per cent in October, underline the scale of the challenge facing Mr Pallas and his colleagues.

The growing gap in unemployment between men and women, at 6.2 per cent and 8.8 per cent respectively, also adds pressure on Mr Pallas’ pledge to use the the budget to get Victorian women back to work using direct state government employment in some instances.

Equity Economics economist Angela Jackson said Tuesday’s budget had to do much heavy lifting to get the state moving again, despite indications that the economy might soon bounce back to up to 90 per cent of its pre-COVID capacity.

“Making up that final bit of aggregate demand is difficult and … that’s where the state budget is going to be important.”

“It needs to be a smart budget, it’s got to be a bit different,” Dr Dixon said. “We’ve got to unwind this economic recession … and the obvious way out of it is through the household sector.

“Household spending fell, nationally, by 12 per cent in the June quarter, it’s massive and the budget has got to do what it can to help revive the household sector. 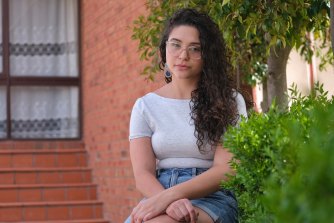 Josephine Paone has struggled to find work since the pandemic hit.Credit:Enrique Ascui

Endeavour Hills woman Josephine Paone has struggled to find enough work to support herself after she lost her full-time job as a receptionist soon after COVID hit.

The 23-year-old said she would would like to see mental health tackled in a youth employment plan in Tuesday's budget.

"Coronavirus has just shown that the youth have been at the bottom because we’ve lost a disproportionate amount of jobs," Ms Paone said.

She said not having a plan is “setting young people up for failure”.