Florida police officers can be heard laughing and celebrating after shooting protesters with rubber bullets during a May protest against police brutality, according to newly released body camera footage.

The video appears to support claims by protesters that they were engaging in a largely peaceful demonstration in Fort Lauderdale on May 31 in support of Black Lives Matter and that police instigated and even escalated the violence.

In response to a story by the Miami Herald, Fort Lauderdale police posted a video on its official YouTube channel Wednesday taken from the body camera of Detective Zachary Baro, who was leading the department’s SWAT team unit.

It was less than a week after the death of George Floyd in Minneapolis police custody, which sparked protests through the United States. 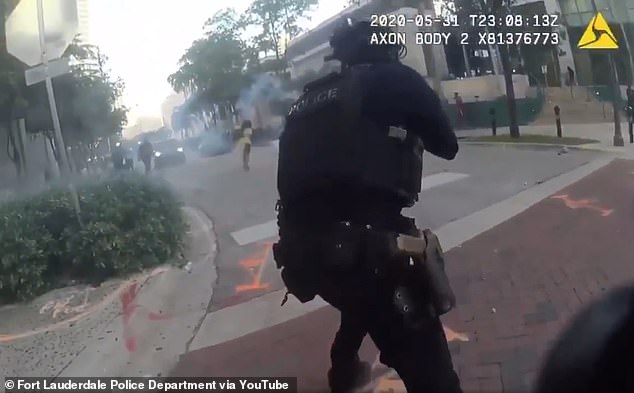 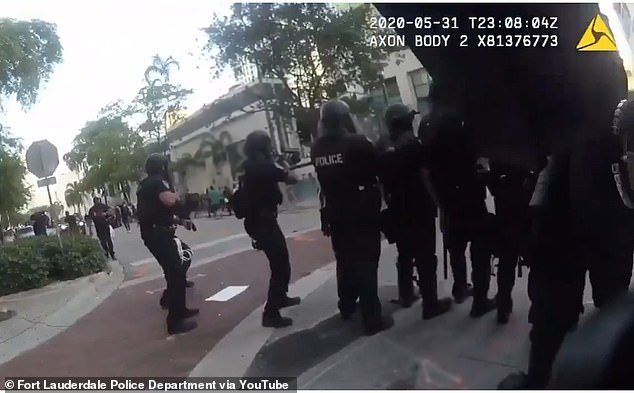 In video released by the Fort Lauderdale Police Department, officers can be heard laughing and joking about shooting protesters 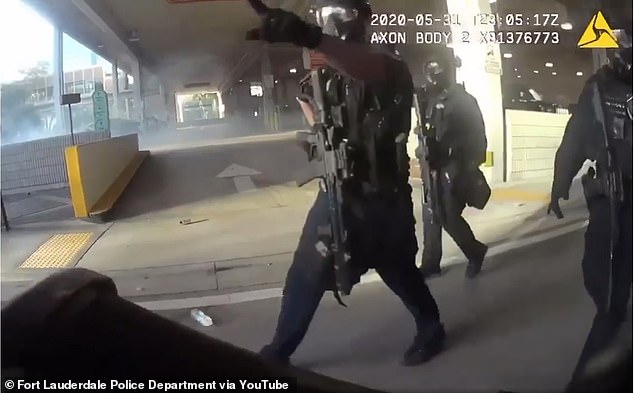 At one point in the video, Baro can be heard saying, ‘Beat it, little f****r’ after officers shot less lethal projectiles.

Baro made the comment after a protester threw a tear gas cannister back in the direction of police.

Moments later, another Fort Lauderdale police officer, Jamie Chatman, approached Baro and asked him if his body camera was turned off.

Baro told him that the camera was in ‘stand-by’ mode and not recording, which turned out to be incorrect.

The two officers were then heard laughing and joking about shooting protesters with rubber bullets.

In one segment of the video, a protester can be heard pleading with officers not to shoot.

‘Please I am begging you, we’re peaceful,’ one man is heard yelling. 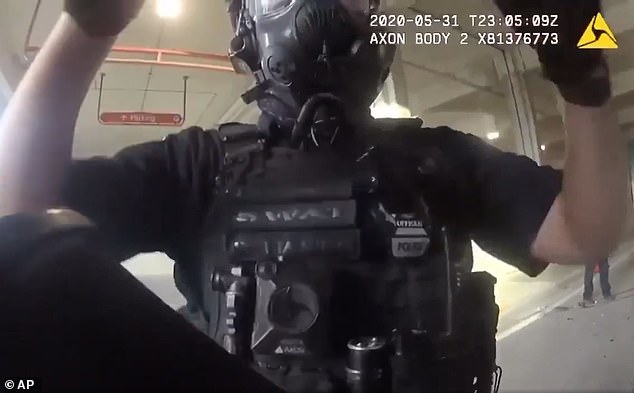 In one segment, two officers are seen exchanging laughs and bragging about shooting protesters 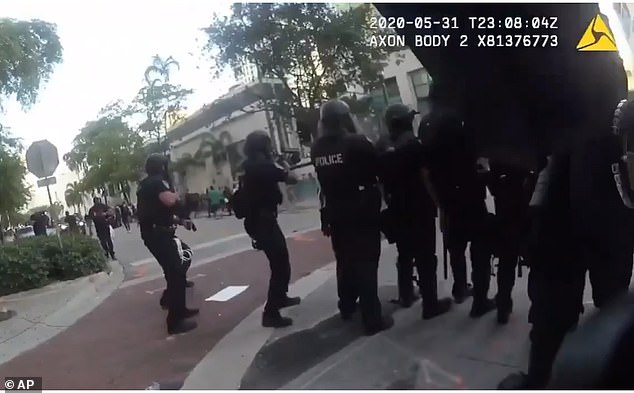 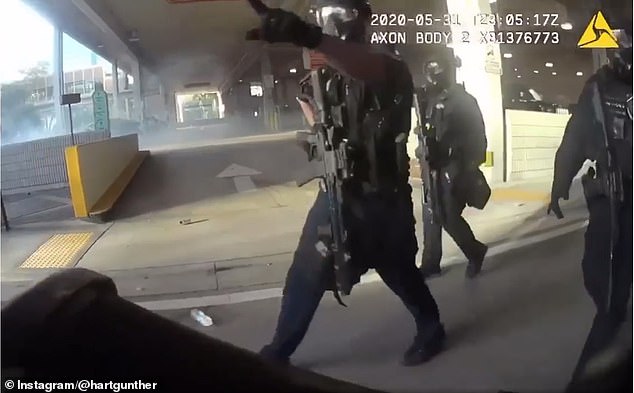 As riot police lined up on the street opposite a group of protesters taking a knee, one of the protesters asked the cops: ‘Do you see this?’

In another instance, Officer Steven Pohorence barreled into a group of demonstrators and shoved a 19-year-old woman who was kneeling in the head.

That incident was caught on camera. Pohorence’s colleagues quickly pushed him away from the woman and down the street.

Police then responded with tear gas. 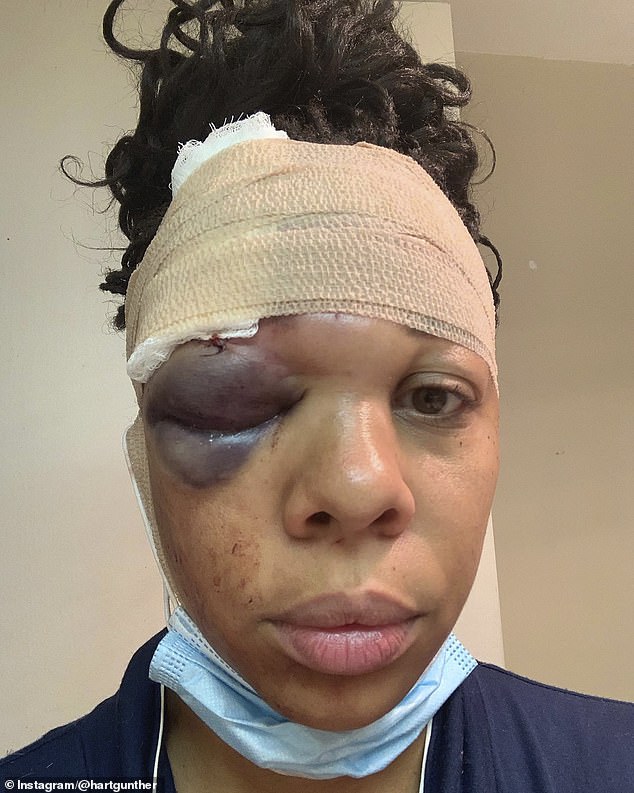 LaToya Ratlieff, 34, suffered a fractured skull after she was shot in the head with a rubber bullet 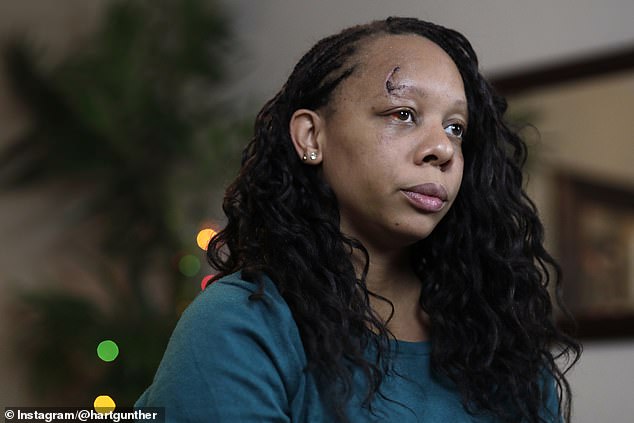 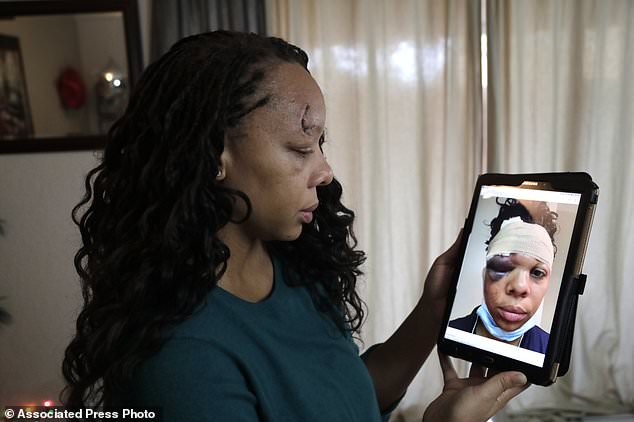 LaToya Ratlieff looks at a photograph of herself in Lauderhill, Florida last month

The body cam footage shows that even after this incident, protesters tried to de-escalate the violence by showing restraint.

Pohorence was charged with misdemeanor battery. His lawyer told CBSMiami that he will plead not guilty.

If convicted, he faces up to a year in jail.

A former police officer who spoke to the Miami Herald said that the behavior seen in the video by law enforcement officials is disturbing.

Officer Steven Pohorence is seen above shouting at protesters before pushing a 19-year-old woman. The demonstrators are said to have begun throwing bottles afterward which led to Ratlieff’s injury as she tried to encourage the protesters to remain peaceful and took a knee

LaToya Ratlieff was shot in the face during what had been a largely peaceful protest, suffering a fractured skull and requiring 20 stitches.

She couldn’t eat for a week and still has trouble seeing out of one eye that is filled with blood.

She has asked to sit down with the police department to discuss ways to change the system and make sure there´s accountability going forward. 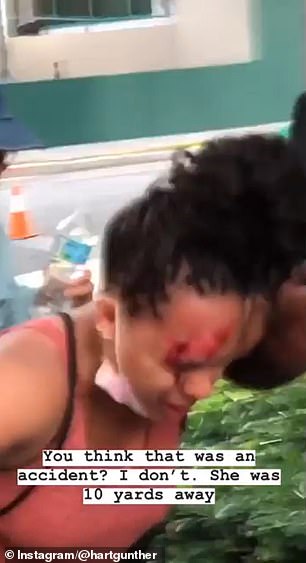 Ratlieff, 34, is seen in the orange tank top to the right holding a sign and walking away from the cops and tear gas moments before she was shot in the head with a foam rubber bullet 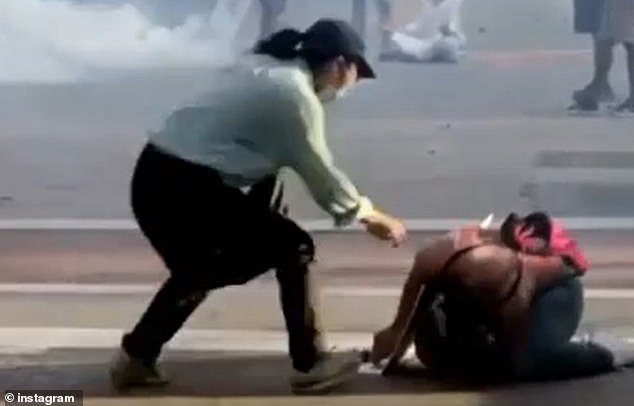 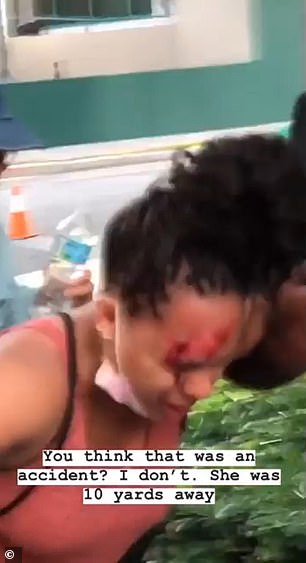 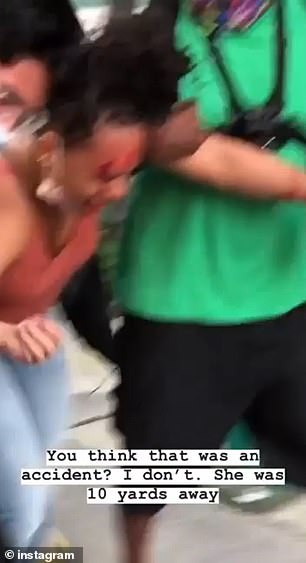 Other protesters captured the moment she was walking away and then hit with the rubber bullet. Demonstrators rushed to help her and drove her to receive medical attention

‘I’m heartbroken. We deserve better,’ she said in response to the video late Wednesday night.

Fort Lauderdale Police Chief Rick Maglione said in a statement that the department was conducting an exhaustive review of nearly 8,000 minutes of body camera footage, with a report to be completed within the next month.

‘The entire video clearly demonstrates our officers were under attack by a group of people who chose to use violence instead of peace to antagonize the situation,’ Maglione said.

‘Although the language is extreme, and offensive to some, our officers were dealing with the chaos of a developing situation.’