The idea was born over trays of sushi. Felix Böck, then a PhD student at Canada’s University of British Columbia, was venting his frustration over the scant interest in his proposal to use waste wood from demolition and construction sites. How, he wondered, could he convince people that there’s no such thing as waste, but rather just wasted resources?

Chopsticks in hand, Thalia Otamendi, the woman who is now his fiancée, looked at him. “She said: ‘Felix, maybe you just have to start with something small,’” said Böck. “And maybe it’s the chopstick.”

He started working on the idea the next day, sketching out plans for ChopValue, a startup aimed at creating a second life for used chopsticks. The plans soon coalesced into actions; recycling bins were dropped off at restaurants across Vancouver, methods were perfected to clean the utensils and a process was developed to transform the chopsticks – most of which are made from bamboo – into sleek household items that range from tablet stands to tabletops. 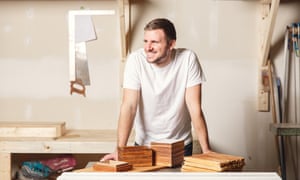 Four years on, ChopValue has recycled more than 32m chopsticks – diverting them from landfills and creating employment for 40 people. “These chopsticks travel 6,000 miles to arrive on your dining table for 20 to 30 minutes,” said Böck, 31. “You can’t possibly feel good about throwing them out afterwards.”

The startup has expanded its footprint across North America, with its process – which uses heat, steam and pressure to transform the chopsticks into wooden tiles – now also being used in Calgary, Montreal and Los Angeles. 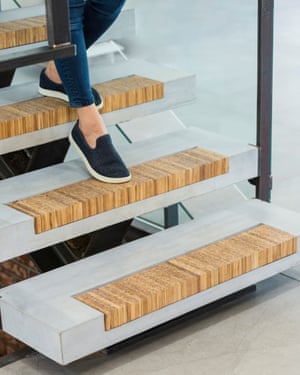 Chopsticks are sourced from hundreds of restaurants as well as locations such as shopping centres, airports and universities; in Vancouver alone ChopValue said it collects around 350,000 used chopsticks a week.

“When you walk into a restaurant and you ask them to place a recycling bin for chopsticks, they still give you the exact same look as they gave me on day one,” said Böck. “I think it’s because it’s one of these little things that we neglect. But the moment someone reminds us of that problem that’s right in front of us, it creates that immediate Aha! moment.”

Among the first companies to collaborate with ChopValue was Pacific Poke, a chain of restaurants based in western Canada. “We thought it was a great idea. We were like, why didn’t anyone else think of this?” said co-founder Dong Lam. “We’re selling a couple of hundred bowls a day so you can imagine how many chopsticks that adds up to over time.”

The restaurant chain has become a fine example of the circular economy that ChopValue is seeking to foster, with most of its locations featuring artwork and tabletops made from chopsticks once used at the restaurant.

At ChopValue, the focus is now on exporting their model. “We do want to mass produce, just on a local scale,” said Böck. His aim is a network of franchises where chopsticks could be sourced from local restaurants and transformed in nearby microfactories with the finished products sold locally.

Currently the company’s products are sold on its website and through partnerships with retailers such as Nordstrom in the US. With each item comes a hint of its previous life, detailing the 886 chopsticks that went into making a butcher’s block or the 9,600 chopsticks used for a work-from-home desk. 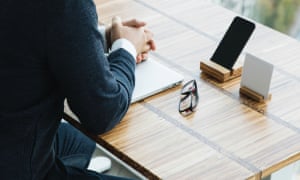 “We’ve made money since day one,” said Böck. “We obviously reinvested every dollar we made into growth because we feel that the responsibility right now is to expand the concept globally.”

His hope is that ChopValue – and the “crazy idea” behind it – will prompt people to reconsider what they see as waste. “There’s this cheesy saying that every small action matters,” he said. “But I think we’re proving that in a fairly practical and exciting way.”