Fewer than 1 per cent of concerns by older Australians about substandard aged care were officially raised with the watchdog because of a sense of futility that anything would change.

And only 25 per cent of Australians receiving aged care at home or in a facility said all their needs were being met, according to new research by the National Ageing Research Institute (NARI) which surveyed older Australians directly to get their unvarnished views.

It found the vast majority of older Australians receiving aged care in a facility, at home or in respite did not bother lodging official complaints. 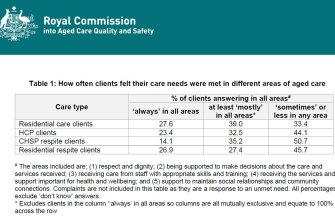 Results from surveys of older Australians on aged care in facilities or received at home or in respite showing how often they felt their needs were met. Credit:National Ageing Research Institute

Some thought their concerns were too trivial or minor, the research said. In reality, some were serious complaints about abuse, including being hurt, shouted at by staff or being forced to wear an incontinence pad. NARI estimated that another 8000 older Australians had similar complaints.

Of all the concerns that were raised officially, less than half of all formal complaints were resolved to the satisfaction of the care recipient.

Associate Professor Frances Batchelor, the director of Clinical Gerontology and a lead researcher at NARI, said there was an "illusion of choice" in aged care.

"If you don't have a good experience of care, what can you do? You can't leave," she said.

“I like to compare it to childcare, if you aren't happy, you don't put up with that. You look for somewhere better. But it seems, as a society, we have set the bar too low in aged care."

Commissioned by the aged care royal commission, NARI conducted two surveys to ask respondents about the quality of their care, their lives and their concerns -and if they had complained and if that was resolved. They surveyed nearly 400 aged care residents before COVID-19 hit. And they also called more than 1200 recipients of home care and residential respite care.

The research, to be released on Wednesday, comes on the eve of the final hearings of the aged care royal commission this Thursday and Friday. Counsel assisting the commission will make final arguments to commissioners Tony Pagone QC and Lynelle Briggs, including recommending reforms to strengthen the rights of older Australians.

In hearings this year, the commission has heard the industry watchdog, the Aged Care Quality and Safety Commission, lacks sufficient powers to investigate aged care providers, that there is a lack of oversight of providers of home care, and that staff at the regulator felt “their hands were tied behind their backs”.

NARI found each aged care resident had at least three to four concerns about the quality of their care. Some had 38. The research found 41 per cent were only rarely or sometimes satisfied with the amount of time staff spent with them. Among those receiving care at home, 77 per cent felt some aspect of their care was failing them.

Yet only 50 per cent even mentioned them to others.

"They felt that nothing would change, 'my complaint is too minor' or 'what is the point?' There is a little bit of resignation," said Professor Batchelor.

The report calls for change to ACQSC, which it found only becomes aware or involved in a small proportion of concerns and complaints.

A request for comment from the ACQSC was made but it wasn't available before deadline.

The most important news, analysis and insights delivered to your inbox at the start and end of each day. Sign up to The Sydney Morning Herald’s newsletter here, to The Age’s newsletter here and Brisbane Times‘ here.

Australian wine hit with new strike as offset for ‘subsidies’