London: Julia Gillard has been confronted by a stranded Australian unable to get home as a result of the restrictions on how many citizens can enter per week, during an appearance in London.

The former prime minister was speaking to an exclusive audience for the Britain-Australia Society at the Royal Over-Seas League, primarily about her work on gender and leadership which she does out of King’s College.

When he opened the discussion to the audience, 31-year-old Eleanor from Melbourne asked the first question.

She revealed that she had suffered the loss of a loved one in the past fortnight but had no way of getting home to Melbourne until a flight on September 4 as a result of the flight caps recently halved following a push by the Labor Premiers.

The decision means Australia will only accept around 3000 returnees per week and will see some 18,000 thrown off flights in just the next six weeks, according to airlines.

The Sydney Morning Herald and The Age can reveal that more than 1000 more people have joined the growing queue of Australians, which now stands as 35,300, who are outside of the country and have told the government that they want to get home.

“If you were still in government or in opposition, what would you be doing about freedom of travel for compassionate reasons?” Eleanor asked the former prime minister.

Her question was applauded by the rest of those attending.

But Gillard said she was going to disappoint the audience, revealing she was hoping to return home herself for Christmas and that she hoped to be able to do home quarantine. She said she is fully vaccinated. 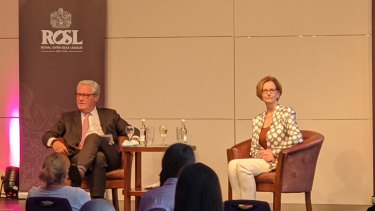 “I suspect I’m going to disappoint you with this answer because I don’t drop into Australian domestic politics any longer,” she said.

“I, when I came here knew that I was running a risk, which I voluntarily assumed; I like you am aware of Australians in very hard circumstances trying to get home,” she said.

Gillard said she did not have a “pressing humanitarian need to return” home and had delayed her travel back so as not to displace a person in more need from being able to secure a flight and scarce quarantine spot.

“Plan A: I was going to go home in August or September and then come back here but I decided when they announced the limitations on hotel quarantine places I wouldn’t displace someone who needed that place more than me.

“But I would obviously still very much like to get home for Christmas, my plan B, I’m on Plan B now – I’d like to go back in November when I hope that vaccination rates are up in a way which means that the government can make some other arrangements.

“So I’m very sorry to hear that you’re here,” she said, in her only reference to Eleanor’s personal circumstances.

She said that as her home state of South Australia had volunteered to run home quarantine trials for the fully vaccinated and was keeping her fingers crossed that trial goes well so that she could take advantage of any changes to the requirement that everyone undergoes 14-days mandatory hotel quarantine at a cost of $3000.

This was the first time Gillard has commented publicly on the Australian pandemic travel blockade.

Alexander Downer, who has been a critic of what’s been dubbed the “Fortress Australia” policy of banning citizens from leaving and restricting the number who can enter, said every Australian had a human right to be able to return to their own country.

“The Australian government should make sure that you’re able to do so [and] not lock you out because it suits a broader agenda, which is an absurd agenda – to eliminate COVID from Australia altogether, that’s not a sustainable policy,” he said.

Downer’s comments were met with applause.

He said he was shocked that the Australian governments were not already allowing home quarantine for Australians who were fully vaccinated.

Gillard has followed in the footsteps of her successor and political foe Tony Abbott in successfully applying for an exemption to leave Australia to relocate to London temporarily for work.

She said she had “fled” London in March last year and was “anxious” about returning to Britain earlier this year when she and Downer were two of the roughly 35 passengers on a flight out of Adelaide.

Abbott is the only former prime minister to strongly criticise Australia’s zero-COVID approach and the harsh restrictions they entail and is due to make what will be his third trip to London during the pandemic.

Gunman opens fire inside NYC hospital, barricades himself inside