The White House has no plan for what happens if President Donald Trump and Vice President Mike Pence are both incapacitated by the coronavirus, it confirmed Thursday.

‘That’s not even something that we’re addressing,’ White House press secretary Kayleigh McEnany said Thursday when asked about a succession plan by DailyMail.com.

She wouldn’t address if the administration should have one in place given the two recent cases of the coronavirus at the White House.

The lack of a plan emerged as the White House battles a coronavirus cluster which infected first Trump’s personal valet, then Pence’s press secretary – forcing Pence to stay away from Trump in case he is infectious.

But experts warned that the ‘nightmare’ scenario of both Trump and Pence being incapacitated could be followed by a huge constitutional crisis with the prospect of rival presidents being sworn in because the belief that it should go to Nancy Pelosi may not be settled law. 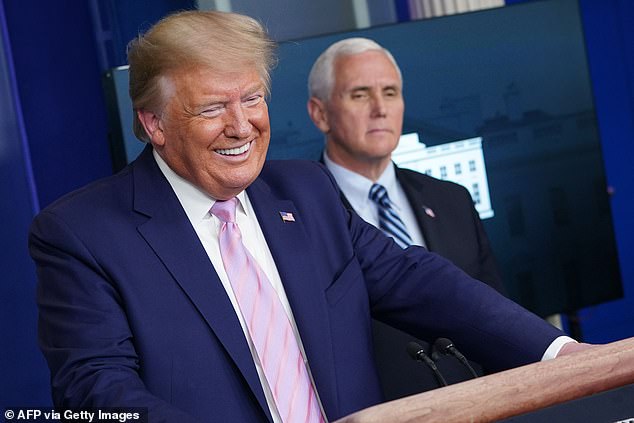 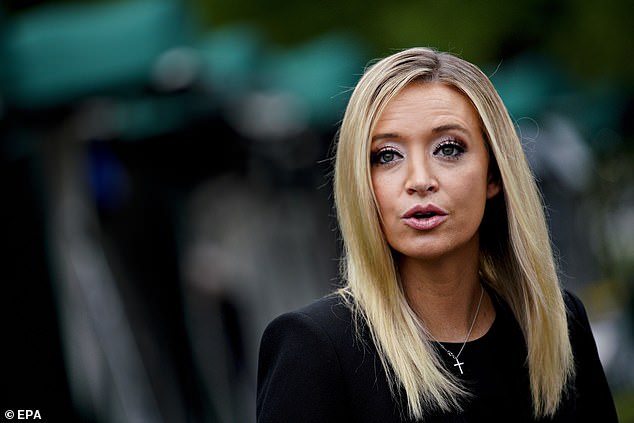 The presidential line of succession is referred to multiple times in the constitution and subsequent laws passed by Congress.

Constitutional and legal experts warn that could lead to a situation where both Pelosi and Pompeo declare themselves the acting president.

The Succession Act of 1886 said that the line of succession went through the presidential cabinet – putting the Secretary of State as third in line.

Then the 1947 Presidential Succession Act inserted the speaker of the House and the president pro tempore of the Senate into the line of succession ahead of the Secretary of State.

President Harry Truman believed that it should be someone who had been elected who would take over.

It has been fixed in the popular mind; Newt Gingrich was said to joke he was ‘two heartbeats’ away from taking the presidency of Bill Clinton, and George W. Bush jokingly nicknamed Nancy Pelosi ‘number three.’

But experts say the 1947 act has never been tested and implementing it could end up in two rival presidents and a Supreme Court clash.

‘There is a strong argument that the law putting the speaker and president pro tem in the Senate in the line of succession is unconstitutional,’ Brian Kalt, a law professor at Michigan State University who is an expert on the succession process, told DailyMail.com on Thursday. He also wrote on the matter for The Atlantic.

The confusion centers on the constitution and some possibly irreconcilable language.

Article II – which establishes the presidency – says: ‘In Case of the Removal of the President from Office, or of his Death, Resignation, or Inability to discharge the Powers and Duties of the said Office, the Same shall devolve on the Vice President, and the Congress may by Law provide for the Case of Removal, Death, Resignation or Inability, both of the President and Vice President, declaring what Officer shall then act as President, and such Officer shall act accordingly, until the Disability be removed, or a President shall be elected.’

Congress has twice spelled out the line of succession, but there is a catch – it is unclear if the speaker or a senator is an ‘officer,’ as required by Article II.

That is the result of the ‘ineligibility’ or ‘incompatibility’ clause.

It says: ‘No Senator or Representative shall, during the Time for which he was elected, be appointed to any civil Office under the Authority of the United States, which shall have been created, or the Emoluments whereof shall have been increased during such time; and no Person holding any Office under the United States, shall be a Member of either House during his Continuance in Office.’

In essence, you are either part of the executive or legislative branches; you cannot be both.

And the constitution appears to use ‘officer’ to mean a part of the executive.

‘There’s a gap in the law,’ Kalt said of a scenario when both executive branch leaders are incapacitated at the same time and someone has to be sworn in.

The 1947 Succession Act says that the Speaker would have to resign from Congress to be sworn in as president. That would seem to get round the ineligibility clause.

But it may not; Article II refers to ‘officers’ in the present tense, so some experts have suggested that the speaker – and for that matter the president pro tempore of the Senate, the next in line in the 1947 act – do not pass that test.

So imagine the scenario when both Trump and Pence are incapacitated. Pelosi could resign her congressional office and be sworn in.

Swearings-in are traditionally part of the inauguration ceremony performed by the chief justice of the Supreme Court.

But that is not a requirement and in fact any member of Congress or a federal judge could swear in a new speaker; Lyndon B. Jonhson was sworn in by a federal judge summoned to Air Force One.

In 2009 a commission on presidential succession set up in the wake of the 9/11 terror attacks warned of the lack of constitutional certainty.

So if the Trump administration received a legal opinion that the 1947 act was unconstitutional, that would let Pompeo return to the previous law – and claim that he is president.

Such an opinion could come from the attorney general, or from an outside voice.

That would let Pompeo be sworn in too, setting up two presidents with no certainty about who is who.

Pompeo would be more likely to be able to access the Oval Office given that he is part of the Trump administration, so he might be better placed to try to run the government.

But Pelosi would benefit from popular perception that she is the rightful successor.

He told DailyMail.com the matter would go to the courts.

‘A court would have to decide and it’s not clear what they decide,’ he said.

While the court was weighing its decision, it would likely issue a temporary stay naming either Pelosi or Pompeo in charge while justices heard legal arguments.

A 5-4 conservative court with a majority who describe themselves as adherents to the original text of the constitution would therefore have to immediately decide who to give the temporary office to before a full hearing, then hold a full hearing.

Given the political polarization in the country that would likely lead to massive protests and general chaos until a final ruling was made – and maybe even after it.

Should the courts choose not to hear the case, which they could do if they declare it a political issue instead of a legal issue, odds would favor Pompeo, simply because he is a member of the president’s party and already established in the executive branch.

Congress could fix the gaps in the law by passing additional legislation – but it would have to be approved by Trump now, rather than before a succession crisis.

‘The whole point of having a line of succession is that at any given moment we know who the president is,’ Kalt noted.

Focus on the FBI’s leaks, not just the spying and other commentary