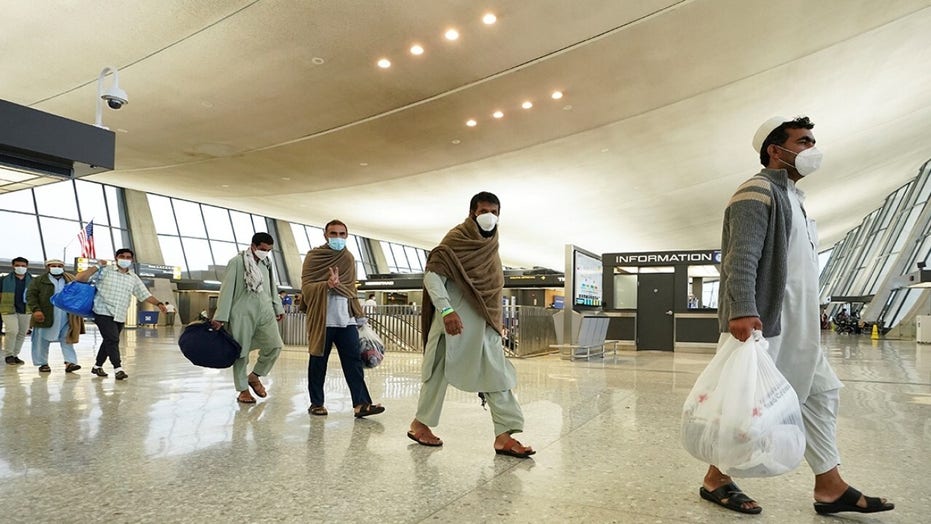 At three U.S. military bases in Europe: Ramstein, Germany; Sigonella, Italy and Rota, Spain, the FBI, Customs and Border Protection and NCIS have hundreds of agents overseeing the screening of about 17,000 Afghan evacuees.

“I’m very comfortable that, you know, these folks are being properly cleared through the FBI,” General Mark Milley, chairman of the Joint Chiefs, told Fox News in an exclusive interview at Ramstein after he thanked the troops who built from scratch an overnight makeshift TSA to screen the thousands of evacuees.

“I talked to the security folks,” Milley said after walking through the screening process. “They’re getting their names registered. They’re doing biometrics. They check their irises, they do their fingerprints. They take a full facial photo. They run that against the 20 years of databases that we have.”

About 30,000 Afghan evacuees passed through Ramstein en route to the U.S., where most will be sent to eight additional U.S. military bases for further screening.

“A couple of hundred or something like that of popped red. Once the individual comes out as red, something is up. Then they go into an individual room and the interviews start interviewing with the FBI, CID, NCIS, those sorts of folks. And then they work through whatever the issues were. In many of the cases, they end up getting cleared and others we have to take further measures,” Milley told Fox.

Those further measures include detention at a U.S. military base in Kosovo. 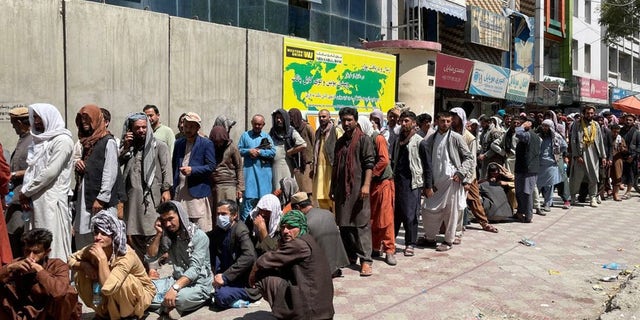 Afghans line up outside a bank to take out cash as people keep waiting at Hamid Karzai International Airport to leave the country after Taliban’s takeover in Kabul, Afghanistan, on August 25, 2021.
(Haroon Sabawoon/Anadolu Agency via Getty Images)

Anyone flagged for drug or terror ties – anyone on a U.S. watch list is sent to Camp Bondsteel. where they can be held for up to a year. Afghans who have been sent to the U.S. have been screened three times before arrival. Most of the random samples of evacuees that Fox interviewed had some connection to helping the U.S. government in Afghanistan, like Youssef Abdullah, a 13-year-old whose father worked for the U.S. Drug Enforcement Agency – his father is already in the U.S.

“My father was a linguist inside the airport. That’s how we were able to get enter into the airport and now we are here.” He and his mother and five siblings were waiting on a makeshift cot in an airport hangar at Ramstein to join their father in the U.S. Ramstein military volunteers are providing 50,000 hot meals a day to these evacuees. They built a city and provide hot showers, clean clothes. Most of the evacuees were only allowed to wear the clothes on their backs and a cellphone, no luggage.

Many had been guards at the U.S. Embassy or worked for various U.S. government entities. Some were among the 600 Afghan Special Forces who helped guard the Kabul Airport in those final days, including this interpreter named Sher Mohammed who Fox interviewed in Sigonella, Italy.

“I feel very, very happy just where we’re safe right now. When I was in Kabul, in Afghanistan, I was very afraid, afraid of being captured by the Taliban. Right now I’m very happy,” Mohammed said while awaiting an onward flight from Sigonella.

One brother and sister told Milley’s wife Hollyanne that they had a full scholarship to the University of Kentucky, Louisville, and a university in Austria. A 21-year-old student from the American University of Kabul, Mehria Ghafoori, was pulled into the airport by a US Marine. She escaped alone and left her entire family to escape. She was being held in a Kinderpod set up with 38 orphans separated from their parents during the chaotic airport evacuation.

“It was so difficult to leave my family behind and come, but I had no choice,” she said.

“My family was in the airport, they wanted to come with me, all of my family but they couldn’t make it because Taliban started gunfire,” Ghafoori said. “So my family just told me, you go and save your life. It’s alright. We will stay here.” She began caring for two of the orphans in the Kinderpod.

Fox News has learned the CIA alone helped the State Department and Defense Department to evacuate more than 30,000 Afghans who had helped the U.S. over the years or were known Afghans flagged by trusted sources.

“CIA worked closely with other US government agencies to support in various ways the evacuation of thousands of American citizens, local embassy staff, and vulnerable Afghans,” a CIA spokesperson told Fox.

Universal Credit: Lags in PRISON buy food from their own canteens to donate to foodbanks for struggling Brits