Residents will be able to veto housing projects or the style and size of extensions in new planning rules in the Queen’s Speech that were watered down amid concerns they would cause the Tories to lose rural votes by the wheelbarrow-load.

Michael Gove’s Levelling Up and Regeneration Bill will allow ‘street votes’ where most loft conversions, conservatories and extensions can be built without full planning permission as long as a third of neighbours don’t object.

The Government also plans to raid developers’ ‘astronomical profits’ to pay for more schools, roads and GP surgeries if locals agree to more houses in their areas.

Critics have called the new street votes policy a gimmick designed to win over disenchanted Tory voters, but loyalists say it will ‘mean local residents can’t have unwanted development thrust down their throats’.

Mr Gove said today local referendums will give communities more say on developments and make sure ‘beautiful’ homes are ‘built in the right place’.

‘We will make sure that through local democratic ballots, sometimes street by street, we can have the enhancement that we need to see the additional homes being built’, he said.

‘In a way that leads to what the experts call ‘gentle densification’, but what you or I would just recognise as simply building in tune with what’s already there’.

Ministers had proposed ‘renewal zones’ in which permission to build some homes would be granted automatically, but it caused uproar on the backbenches and was axed last year. The local votes now go a step further in giving communities a say.

Countryside advocates have warned that villages across swathes of southern England are becoming part of a wider sprawl from towns with profit-hungry developers building on green belt land to reduce their costs.

But yesterday Robert Jenrick, Mr Gove’s predecessor as housing secretary, predicted the government would miss its target of 300,000 new homes a year ‘by a country mile’. 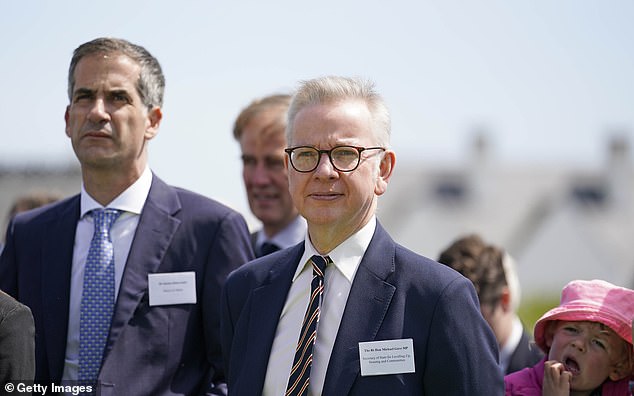 Michael Gove, pictured at the opening of the Great Field play area at Poundbury during his visit to Dorset last Friday, has announced planning reforms that will allow locals to vote on developments 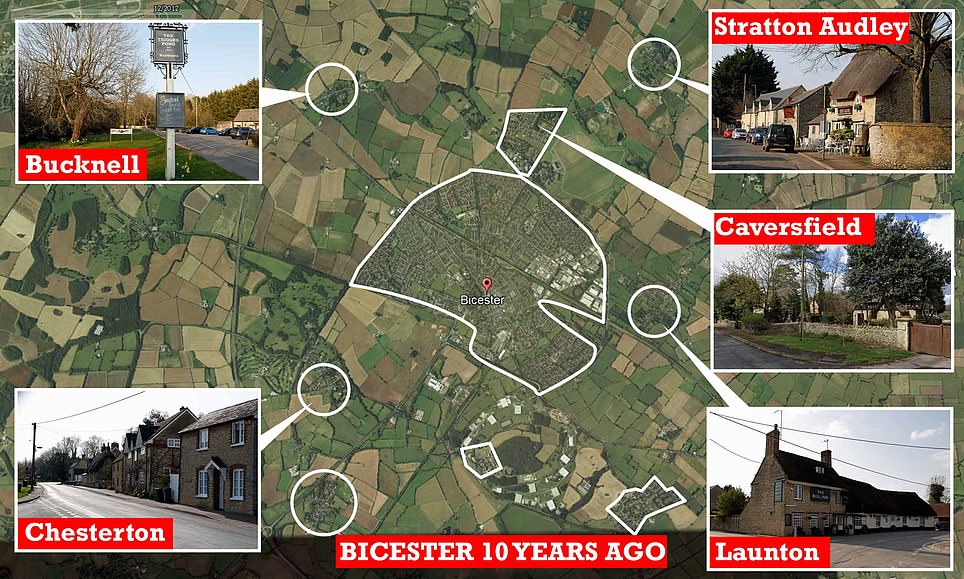 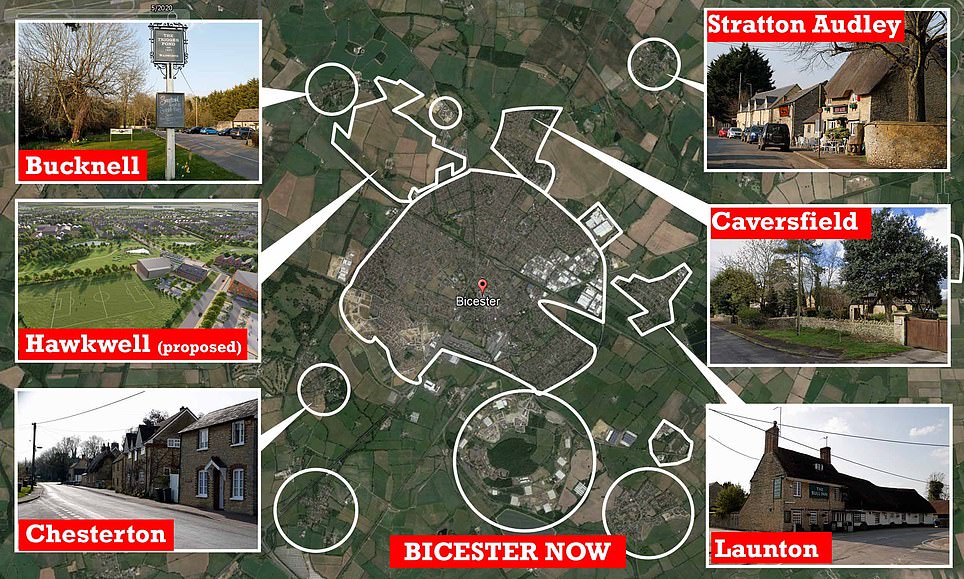 Boris Johnson has been warned of a ballot box backlash amid anger that English villages are being ‘swallowed up’ by sprawling towns. Among the areas that has experienced huge recent change is Bicester in Oxfordshire (pictured), where the population could double to 50,000 in the next 20 years if 13,000 planned homes are built in the designated ‘garden town’. The map shows how ‘urban sprawl’ has already changed the face of the former market town over the past decade – and seen it encroach on surrounding villages, practically swallowing them up as it expands

The Conservative leadership are worried that they cannot win the next election, or boost the economy, if they don’t build more homes and allow more opportunities for young people to get on the housing ladder.

Tory MP John Penrose, who has campaigned for new housing policies, said the plans including street votes ‘mean local residents can’t have unwanted development thrust down their throats, but can allow development that make homes affordable for their children and are right for their area’.

The Levelling Up and Regeneration Bill aims to take power out of the hands of developers and councils and give it to homeowners.

It will mean people will be able to decide if they want more development on brownfield sites in their local areas.

The layout of new developments, the facades of buildings or the materials to be used would also be decided by locals.

They will also be able to determine how levies on developers are spent so they can be directed towards building new homes or schools.

Under the Street Votes scheme, if a two-thirds ‘super-majority’ of residents agree to support a plan, it could go ahead.

Any development would have to be in keeping with the design styles favoured locally, and strict limits will prevent development from impacting neighbouring streets. 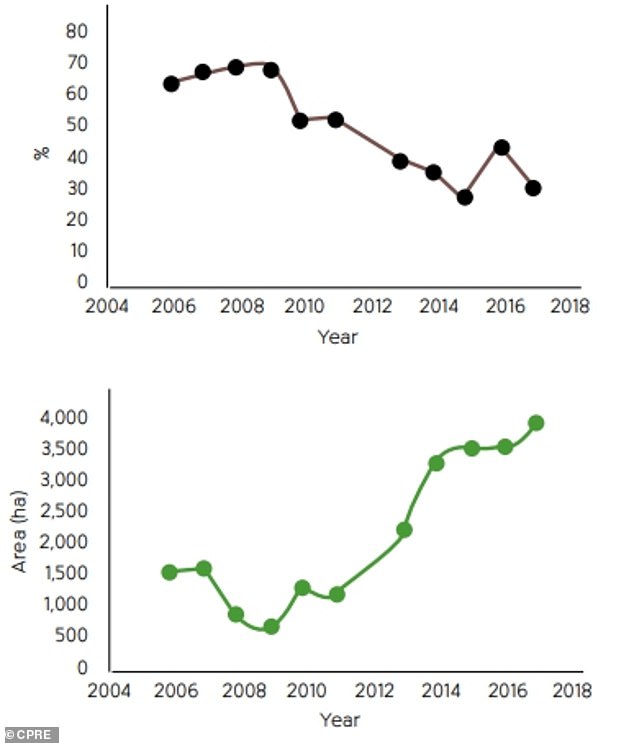 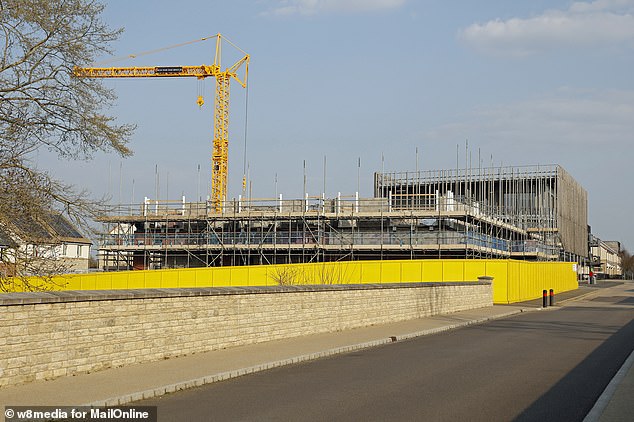 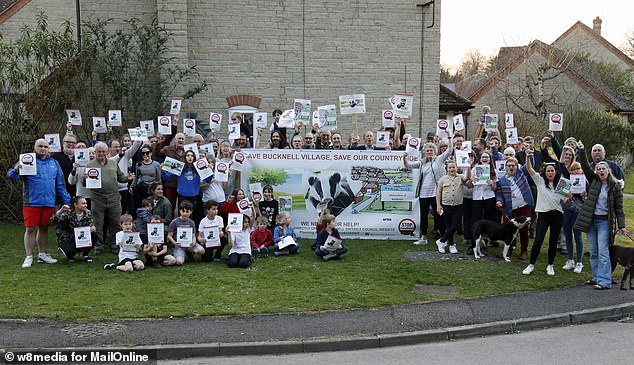 Residents of the Oxfordshire village of Bucknell are up in arms about the development which will see 3,100 new homes built

Ministers hope the scheme could lead to a ‘Victorian Renaissance’ in development, allowing streets of semi-detached houses gradually to evolve into terraced streets.

It is thought this could have a particularly transformative impact in places like Birmingham, Manchester, and London.

Housing secretary Michael Gove said that this could lead to ‘gentle densification’ of areas, with incentives for homeowners to vote for development.

Developers will also be charged a locally set, non-negotiable levy which residents can then determine how to spend.

It could be directed at local infrastructure such as housing, schools, GPs and new roads.

Ministers pledge to cut bureaucracy and red tape and digitise the planning system, as well as enhancing the power of communities to protect areas from development.

Small builders will be put on a ‘level playing field’ with bigger developers by exempting them from certain planning fees and creating a new category just for them.

It comes after the Government was forced to pull planning laws which infuriated Tories in their traditional heartlands over fears of more development.

New environmental impact assessments will also be introduced which will replace EU ones.

The Bill will also enable every county in England to apply for devolution by handing more power to local leaders by 2030.

The Renters Reform Bill will provide security for tenants in the private rented sector by ending Section 21 notices, which allow landlords to evict a tenant without having to give a reason.

It will also ‘strengthen landlords’ rights of possession’, therefore providing a ‘fair and effective’ market for tenants and landlords, the Government said.

Landlords will have to make shops that have been vacant for more than a year available to prospective tenants under plans to revitalise struggling town centres.

Unlocking new powers for local authorities to bring empty premises back into use and instigate rental auctions of vacant commercial properties in town centres and on high streets has been included in the Queen’s Speech.

Other measures include the ability to make the pavement cafes which sprang up during the Covid-19 pandemic a permanent part of the town centre landscape.

Under the Levelling up and Regeneration Bill measures to revive England’s high streets, councils will be given powers to take control of buildings for the benefit of their communities.

Last night, Robert Jenrick, the former housing secretary, told the Queen’s Speech debate he thinks the government will miss its own 300,000 homes a year manifesto pledge ‘by a country mile’.

Nearly 4,000 Amazon workers wrongly told they had Covid by NHS