Washington: There was an unexpected twist on Tuesday evening as Venezuelan opposition leader Juan Guaido's attempted uprising against President Nicolas Maduro's government appeared to be sputtering out. Secretary of State Mike Pompeo said that Maduro was set to flee Venezuela and that Russia had persuaded him to stay. 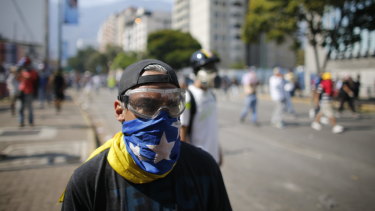 An anti-government protester, masked with a Venezuelan flag, looks toward security forces during clashes near La Carlota airbase in Caracas, Venezuela. Credit:AP

Russia denies the assertion, and, on Wednesday, Russian Foreign Minister Sergei Lavrov said in a phone call with Pompeo that Washington's "interference" was "a most grave violation of international law," according to Russia's Foreign Ministry.

"It was indicated that continuing these aggressive steps would be fraught with the most serious consequences," a Foreign Ministry statement describing the call said.

"Only the Venezuelan people have the right to determine their own fate, which is why a dialogue is necessary between all the political forces of the whole country, as its government has long been calling for."

The anecdote underscored the battle for influence being waged between the United States, which firmly backs Guaido, and Russia, a friend of the Maduro government, over Venezuela.

But why does the Kremlin care what happens in Caracas? Below, a primer on why Moscow, like Washington, has been open about what it wants to see happen next in Venezuela.

Is this about money?

Yes, but not only. Russia owns substantial portions of Venezuelan oil fields, which it got in exchange for loans and bailouts over the past decade. And Venezuela signed over almost half of Citgo – its wholly owned company in the United States – as collateral to Rosneft, Russia's state-owned oil company, for what was reported to be $US1.5 billion in cash.

And "with something in the neighbourhood of twenty billion in Rosneft assets tied up in the country, the Russians have real concerns they could lose out as a result of a wholesale change in power – despite assurances from the opposition and the US that would not be the case," Matthew Rojansky, director of the Wilson Center's Russia-focused Kennan Institute, wrote in an email.

Some have argued that the loans, because they were not approved by the opposition-controlled National Assembly, "would not be legal under Venezuelan rule of law," as Moises Rendon, associate director and associate fellow of the Centre for Strategic and International Studies Americas Program, said.

"They want to remain in Venezuela not only today but for a day after," said Rendon, a former legal analyst with Banco Occidental de Descuento, a prominent Venezuelan commercial bank, referring to Russian interests. "They want to be sure they get their money and their investments are protected."

So it's about money and energy and the military?

Part of the reason that the Trump administration and its supporters in Congress feel as strongly as they do about Venezuela is because of opposition to communist Cuba, which backs Venezuela.

But if US opposition to Maduro is an extension of US opposition to Cuba, then is it, in a way, history repeating itself? When the Trump administration reversed President Barack Obama's thawing of relations with Havana, Cuba went back to tightening ties with Cold War ally Russia. Among the economic and political clashes that defined the Cold War, perhaps the most famous was the Cuban missile crisis in the 1960s, when the Soviet Union put nuclear-armed missiles in Cuba, a flex of force not far from US shores. President John F. Kennedy and Soviet leader Nikita Khrushchev ultimately defused the crisis.

But such a reading of historical parallels to the Venezuela crisis is too neat and ignores that this is not the 1960s. As Rendon noted, Russia has not put nuclear-armed missiles in Venezuela. And the world is not divided between the United States and the Soviet Union. "Having a broader coalition is probably more effective," Rendon said, suggesting that the United States should call on Brazil, Colombia, Argentina and Peru to effectively ask Russia to step back.

And there are other countries that are just as, if not more, relevant to Russia's involvement in Venezuela.

So what do Libya and Syria have to do with it?

In 2011, a coalition led by the North Atlantic Treaty Organisation helped rebels oust Libyan leader Muammar Gadhafi, who was killed shortly thereafter. "The Libyan case represents exactly what Russia fears most – that if it does nothing, America will use military power to topple a Moscow-friendly regime," Rojansky wrote.

That fear is not just about what happened in Libya. "Official Moscow is utterly preoccupied with the notion that Washington uses its power to force favourable regime changes around the world, and that sooner or later Russia itself will be on the target list. The Russians therefore oppose any change in the Maduro regime both because America so strongly supports it, and because of the unacceptable precedent such change might set for Russia itself and for other states closer to home in Eurasia," he wrote.

The Libya case, the thinking goes, is part of why the Russian powers that be have been so supportive of Syria's President Bashar Assad. And just as Russia learned from Libya that the West could not be left to intervene in a country without its leader ending up dead, so, too, did Russia learn something from Syria.

"The Syrian model suggests that with a relatively small military commitment and some agile diplomacy, Moscow can not only prevent this outcome but secure enormous enduring leverage over the local government," Rojansky wrote.

Russia, in all likelihood, can't fight in Venezuela as it has in Syria. Venezuela is half a world away, and Russia is preoccupied elsewhere. "But at relatively low cost they can put down markers that will strengthen their negotiating position both with Washington and internally with the Venezuelan parties, like sending a high ranking general and a few plane loads of troops and supplies," Rojansky wrote.

So it's about money and energy and the military and kind of Cuba and Libya and Syria?

And Russia's own neighbours

"Most immediately, getting involved in Venezuela gives (Russian President Vladimir) Putin the opportunity to poke the US in the eye," wrote Andrea Kendall-Taylor, senior fellow and director of the Transatlantic Security Program at the Centre for a New American Security.

"From Putin's perspective, inserting himself in Washington's backyard is payback for US meddling near Russia's borders," an allusion to the expansion of NATO, Russian perception of US support for revolutions in the former Soviet republics of Georgia and Ukraine, and any number of other real and imagined instances of US meddling.