Will government blow the whistle on football? Labour says it is ‘increasingly difficult’ to make a case for elite sport to be exempt from lockdown rules after outrage at players hugging and singing in dressing rooms

Labour today piled more pressure on Boris Johnson to shut down professional football after players flouted Covid-19 rules again and were accused of losing the ‘moral case’ to continue as infections rise and the NHS struggles to cope.

Social distancing was abandoned at FA Cup games amid wild celebrations in packed dressing rooms at Chorley and Crawley after their giant-killings over the weekend.

Hundreds of fans also gathered outside non-league Marine’s ground on Merseyside yesterday to welcome Spurs before their 5-0 drubbing, with Jose Mourinho filming the packed pavements where many were not wearing face coverings.

It comes as Celtic were rocked by the news 13 players and three members of their coaching staff have been forced to isolate after their controversial trip to Dubai, on the day they are meant to play Hibernian.

Meanwhile, figures have emerged that appear to show players and staff are more likely to catch the virus than people in the general population.

Mandatory testing at 66 EFL clubs took place this week and found 112 Covid cases out of 3,507 tests – an infection rate of 3.19 per cent. In comparison, a mass public testing scheme by the Office for National Statistics involves more than 60,000 randomly allocated tests per week and, for the week ending January 2, it recorded an infection rate of just 2.06 per cent.

In another development, the FA has launched an inquiry following Crystal Palace star Eberechi Eze’s appearance at QPR’s cup tie against Fulham without wearing a mask and the authorities insist they did not give the green light for him to attend.

There is ‘growing frustration’ among ministers, who have fought for football after a series of incidents during the festive period in which players from Tottenham, West Ham and Manchester City organised and attended Christmas parties when the rest of the UK was told not to mix.

Labour’s shadow sports minister Alison McGovern told Sportsmail: ‘Sport in this country has taken huge measures to ensure games can go ahead and players and fans are kept safe. But it’s clear that with cases rising across the country, this is becoming increasingly difficult’.

Labour leader Sir Keir Starmer also hinted towards calling for a sport shut down today when he said it was ‘extraordinary’ that current lockdown measures are not as strict as they were last spring.

With football on the brink, it also emerged today: 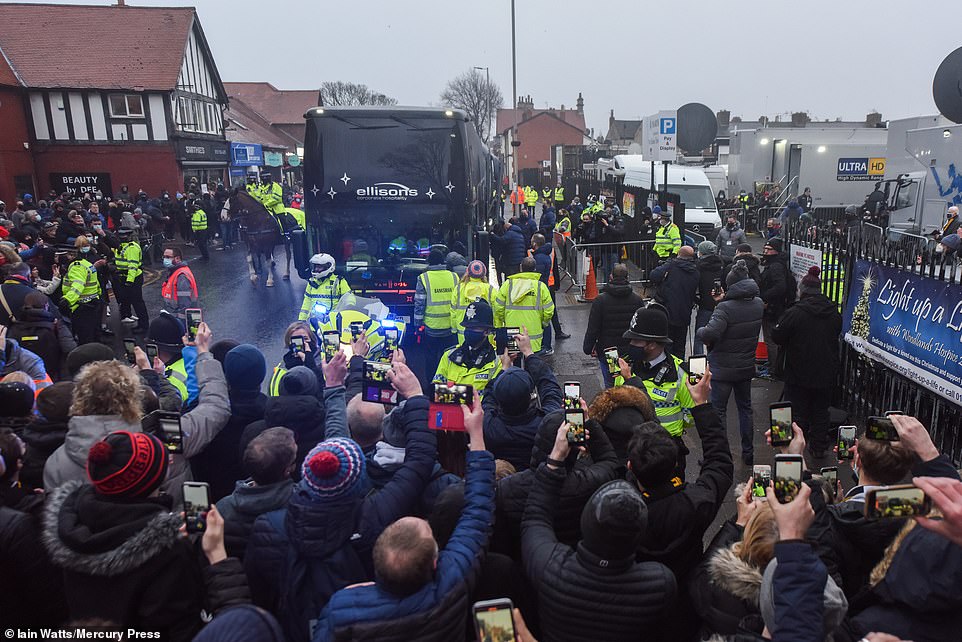 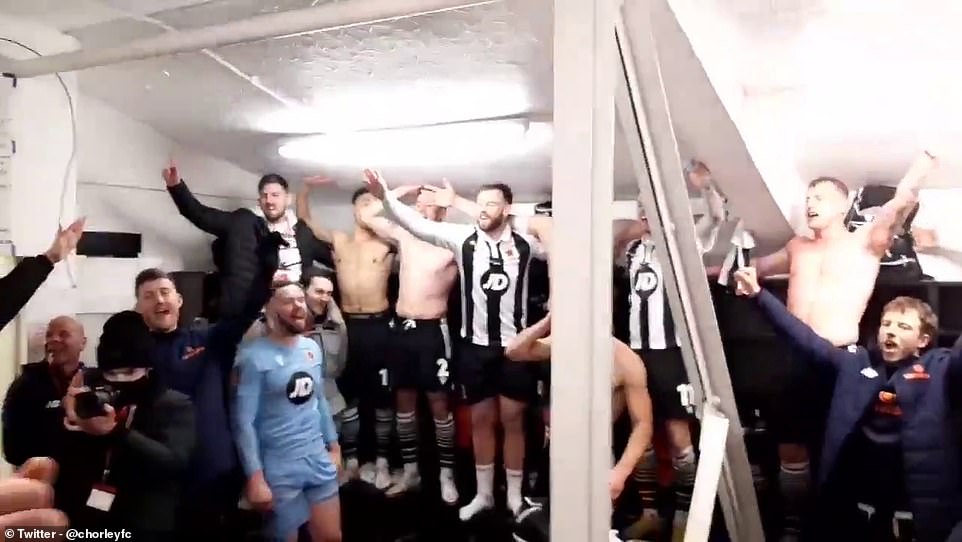 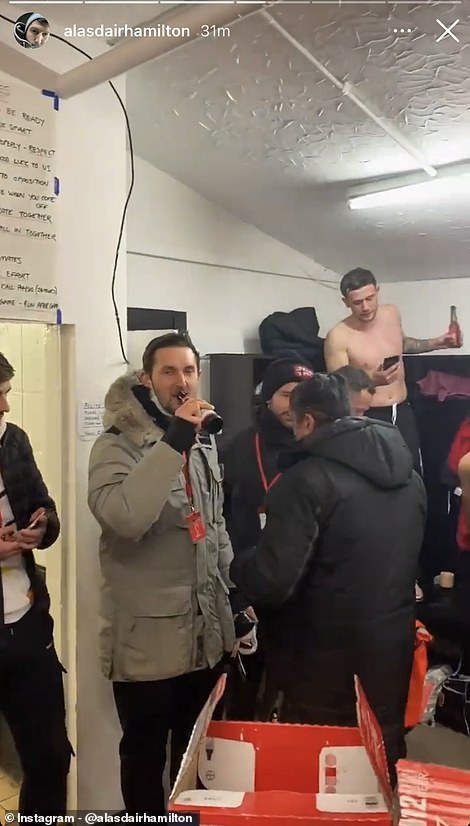 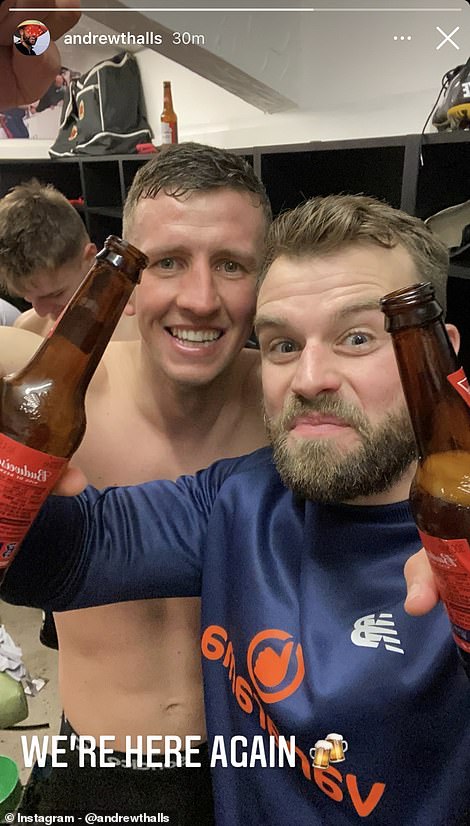 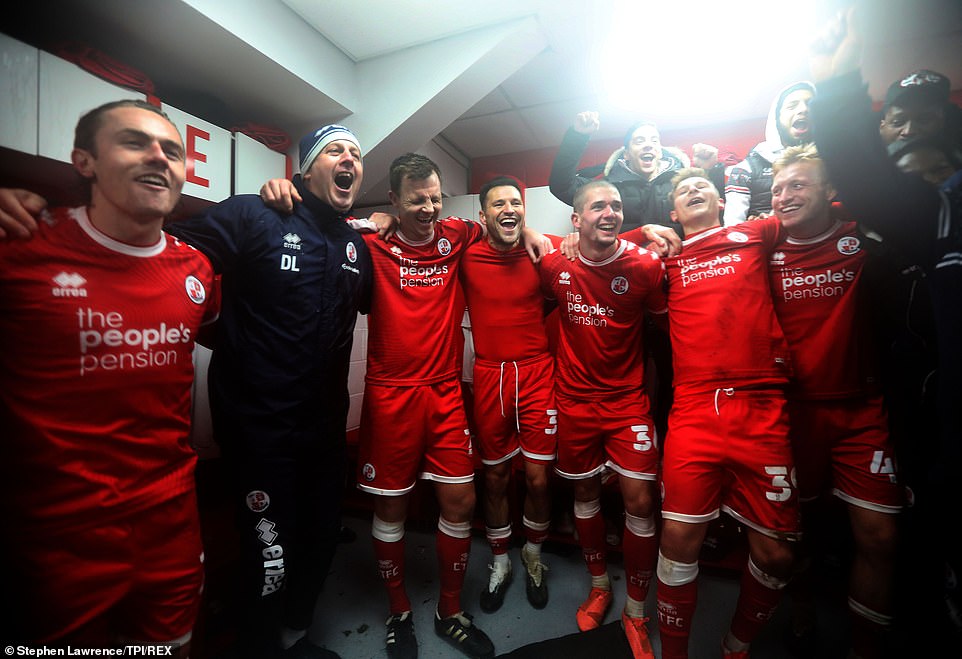 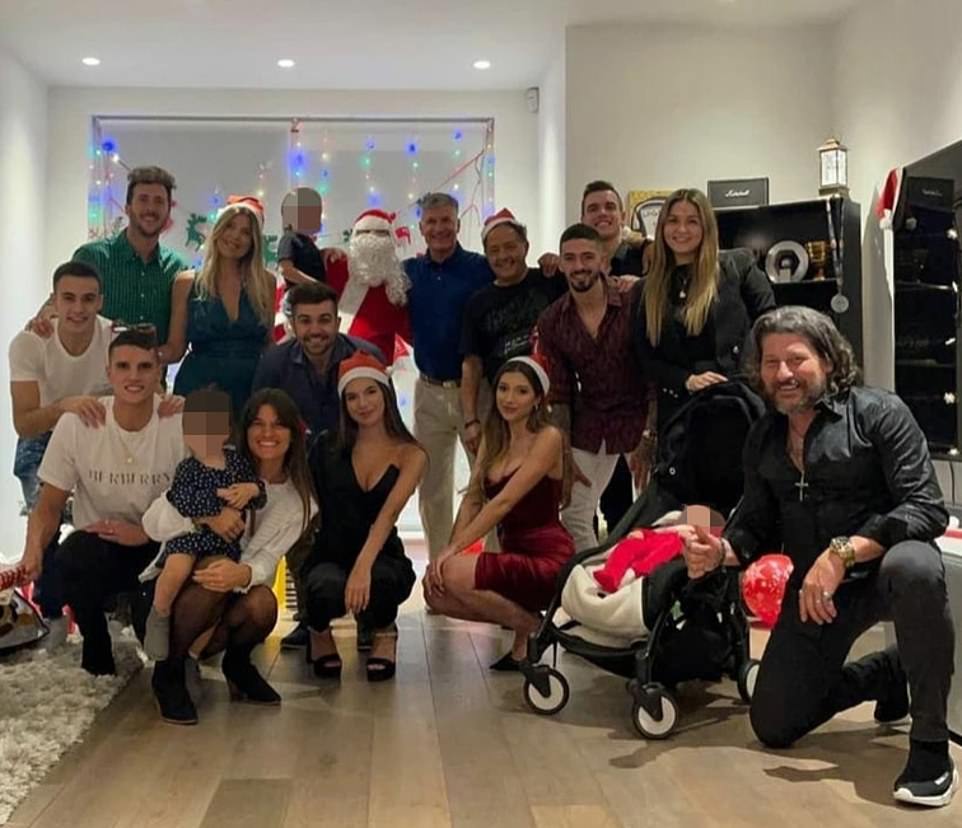 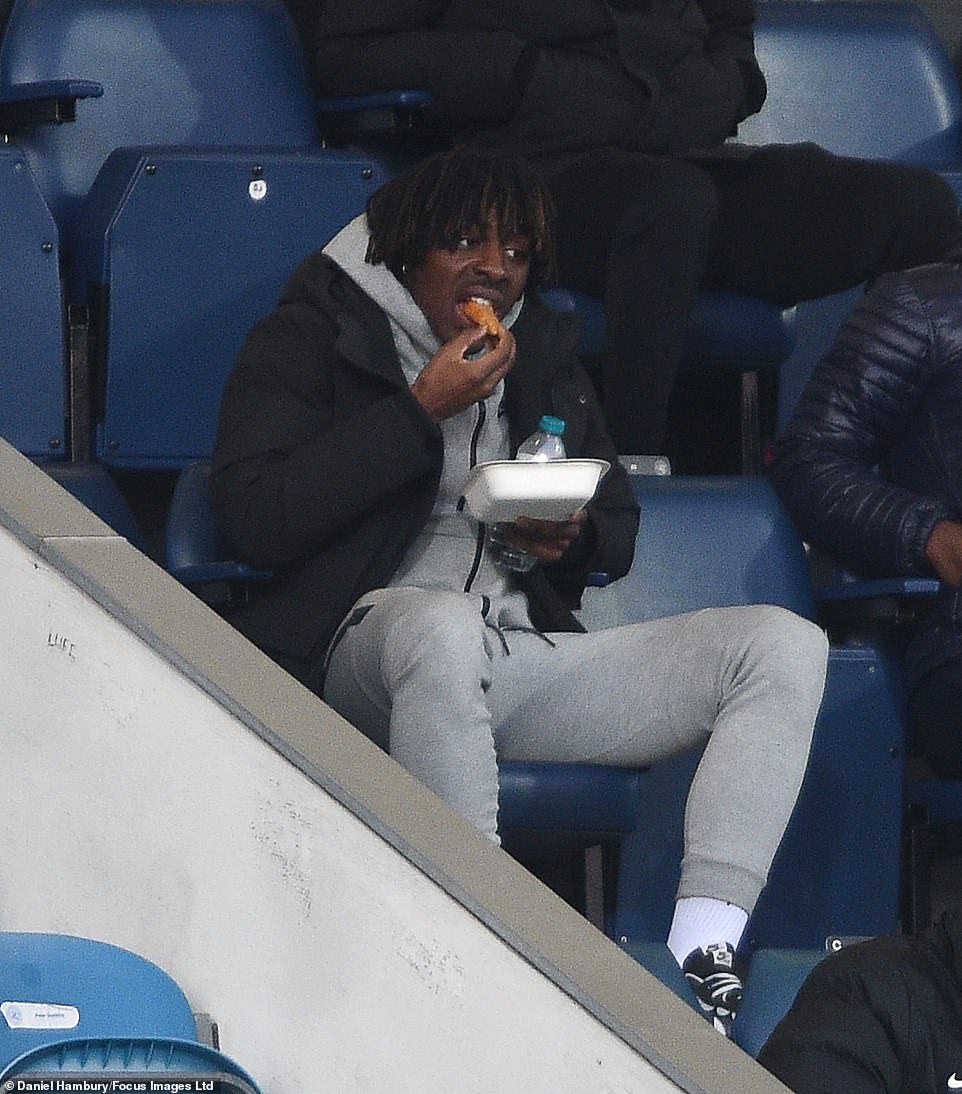 Crystal Palace player, and former QPR midfielder Eberechi Eze watched QPR’s cup tie against Fulham (pictured) without wearing a mask and the authorities insist they did not give the green light for him to attend in yet another blunder

Celtic have been rocked by the news 13 players and three members of their coaching staff have been forced to isolate after their controversial trip to Dubai, on the day they are meant to play Hibernian.

Celtic spent six days in the UAE, where pictures emerged showing members of the squad not distancing or wearing face coverings. After being tested upon their return to Glasgow, they had one positive case in defender Christopher Jullien, who is currently injured for the next four months. Manager Neil Lennon and assistant John Kennedy are among those now isolating.

Scotland’s First Minister Nicola Sturgeon, who had questioned whether Celtic were following social distancing rules, said on Monday: ‘Elite sport has privileges and these privileges can’t be abused. I hope Celtic reflect seriously.’

Celtic insist their Monday fixture against Hibs will go ahead but the news emerges on the day that football across Scotland underneath the top two divisions was halted in an attempt to curb the ongoing rise in Covid-19 cases.

Last week the Premier League recorded 40 Covid cases and the EFL a further 112, in its first full round of testing since November.

Medical experts have said that unless celebrations on and off the pitch are stopped then professional football should be stopped – as the plug was pulled on the game below the top two divisions in Scotland.

First Minister Nicola Sturgeon also told football clubs not to ‘abuse’ their privileges after Celtic jetted off to Dubai for a training camp. Quarantine exemption rules for elite sportsmen and women will be reviewed after a Celtic player tested positive for coronavirus, it emerged today.

A senior government source said last night that Downing Street is keen to let elite sport continue – but the weekend of blunders isn’t helping their case with the footage from Crawley, Marine and Chorley were viewed with horror in Whitehall, according to The Times

James Calder, the independent chairman of the government’s committee on the return of elite sport, said the sport had to be more vigilant.

‘Just because you have a negative test one day doesn’t mean you won’t have COVID the next day and be infectious,’ Calder told the newspaper.

‘You need to keep your guard up … that’s not just players but all staff, outside the clubs and training grounds as well.’

The Premier League wrote to its clubs on Friday making it clear that hugging after goals and hand shakes before and after matched are banned. The EFL has also strengthened its guidance to clubs.

But some have claimed elite sport is now on a knife-edge after scenes at the weekend.

Footage from Chorley, who knocked out Derby County, and at Crawley Town, who defeated Leeds, showed the players celebrating enthusiastically after the match with songs and Champagne

At Chorley, the players were recorded belting out the Adele song, Someone Like You, in the dressing room after their 2-0 victory over Championship side, Derby County.

And the booze flowed at Crawley Town, as players embraced in the changing rooms following their 3-0 giant killing against Leeds United.

At Marine, a huge crowd gathered to see the Tottenham Hotspur players arrive before kick-off. And on the pitch, Spurs players hugged youngster, Alfie Devine, 16, after he scored his first goal for the club in a 5-0 victory.

But for some the games has already passed a point of no return. Former FA chairman and respected figure within the game, David Bernstein, has reiterated his concern over football’s continuation.

‘The pictures of players celebrating and hugging on the pitch in these unique circumstances undercut the message of social distancing, which is extremely dangerous,’ he told the Telegraph. ‘That adds to the reasons why I believe that football should be suspended.’

Meanwhile, Watford striker Troy Deeney has claimed that footballers can’t stop breaking new Covid rules because it is in their ‘nature’ to hug their team-mates during goal celebrations, and the Watford striker called on Prime Minister Boris Johnson to shut down the sport.

‘Unless the government or governing bodies step in and say, ‘you cannot do this, you cannot do that’, then it goes back to what’s morally right,’ Deeney told talkSPORT.

‘Ultimately, it’s up to the powers that be to shut football down, and it doesn’t matter if it carries on into June and July like last year, or we talk about it week after week as people make mistakes.’

Pep Guardiola, the Manchester City manager, insisted that his club would follow the enhanced protocols but defended players hugging on the grounds that all involved had been tested.

He said: ‘I don’t know what’s going to happen but a guy scores a goal and has the joy to celebrate, I don’t know if he’s going to think, ‘I can’t hug my team-mates for two or three seconds.’

QPR boss Mark Warburton has admitted the club made a mistake in allowing Eberechi Eze to attend their FA Cup tie against Fulham on Saturday. 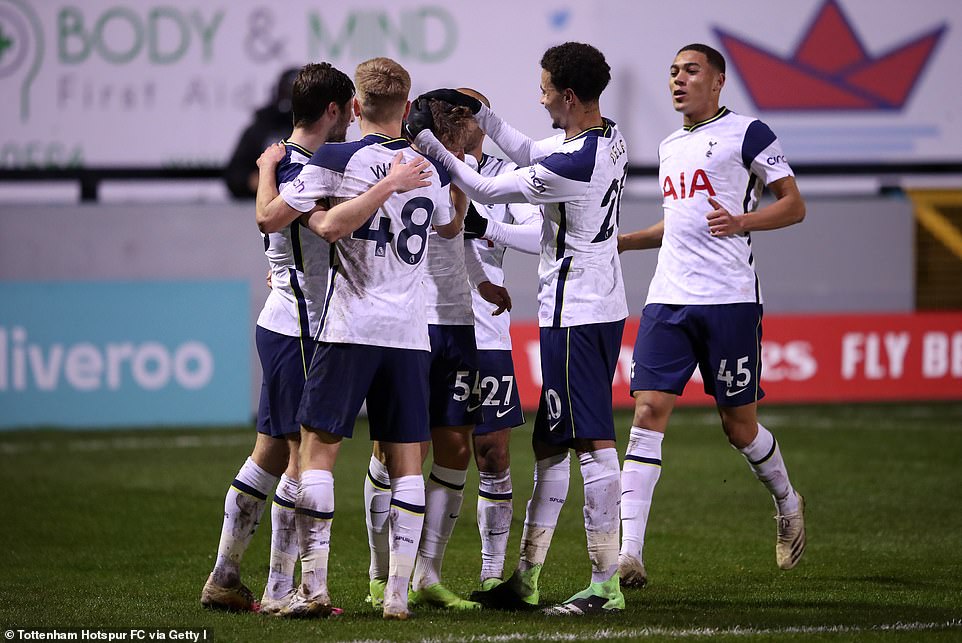 Tottenham Hotspur’s players ran to youngster Alfie Devine when he scored at Marine. Players have been warned not to hug 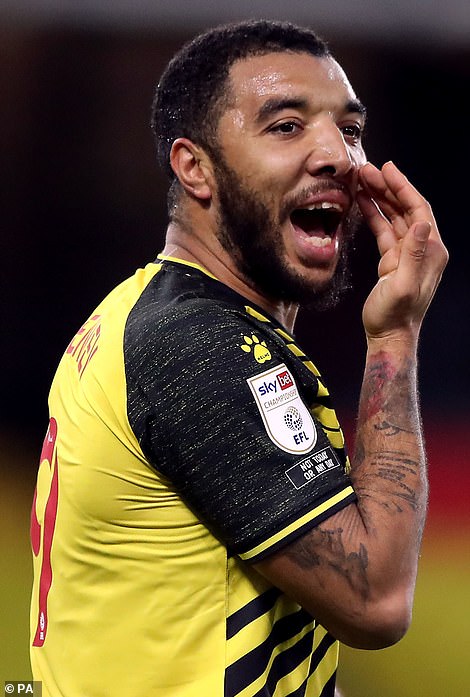 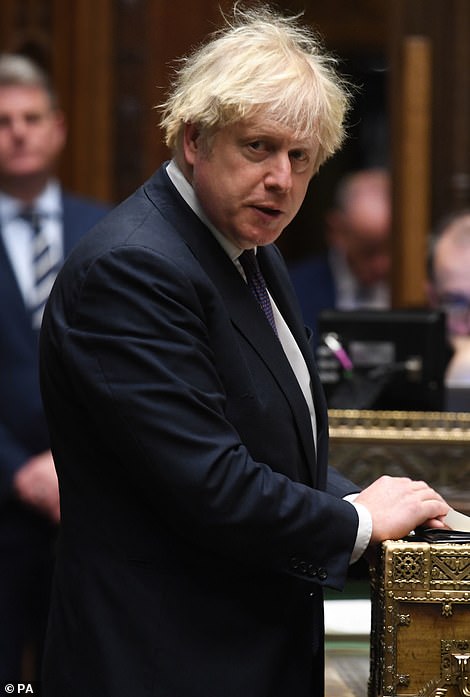 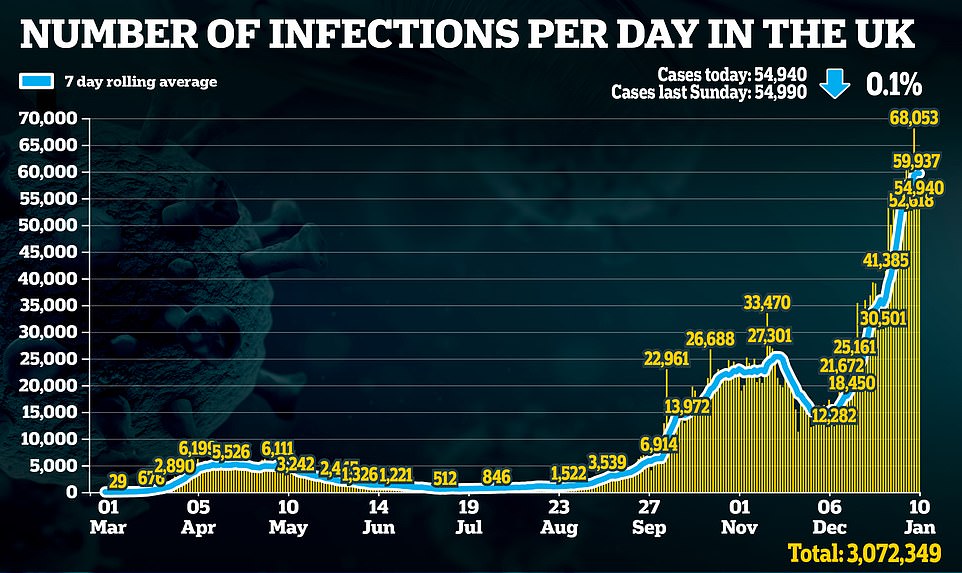 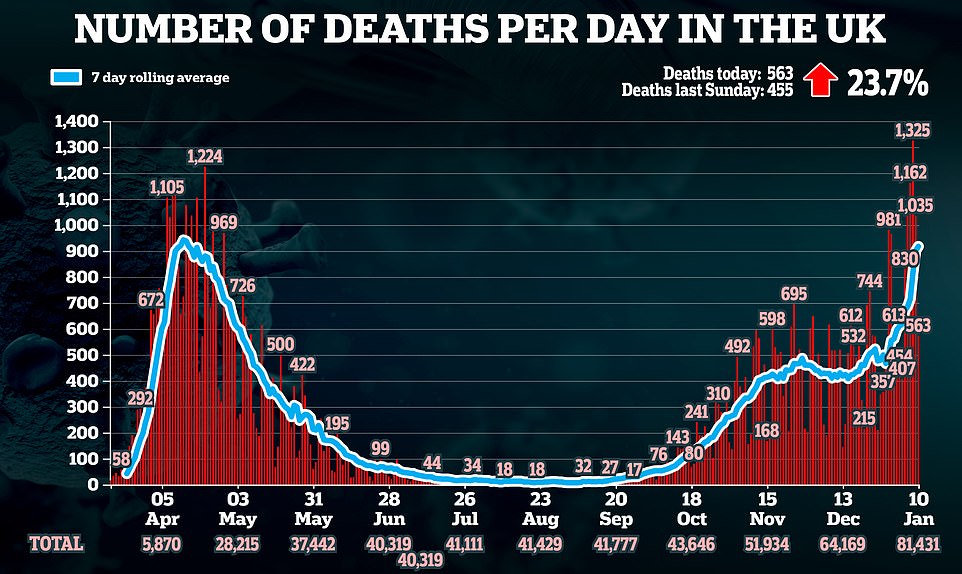 Crystal Palace winger Eze was allowed to sit in the directors’ box at Loftus Road to watch his former club despite the current ban on fans and the national lockdown.

The Football Association is understood to be looking into the incident which seems to be the latest in a string of footballers breaching Covid-19 protocols.

‘We know the situation that society is facing in this country, we are all very aware of it,’ said Warburton at a pre-match press conference.

‘On this rare occasion we have made a mistake, it’s as plain and simple as that. It will not happen again.’

Eze, who joined Palace from Rangers for around £20million in the summer, was pictured not wearing a mask as he sat in the stands.

Palace have so far declined to comment but Eagles boss Roy Hodgson said last week that no further breaches of Government guidelines by his players will be accepted after Luka Milivojevic broke the rules on New Year’s Eve.

Palace captain Milivojevic issued an apology after his household mixed with Fulham forward Aleksandar Mitrovic and his family.

There were further breaches of the regulations over the festive period involving Tottenham, West Ham and Manchester City players.

Quarantine exemption rules for elite sportsmen and women will be reviewed after a Celtic player tested positive for coronavirus following the squad’s controversial recent trip to Dubai, Nicola Sturgeon has said.

Celtic confirmed on Monday that defender Christopher Jullien has tested positive and is self-isolating at home after the staff and players were checked following their return to Scotland on Friday.

All of the other members of the squad and backroom team have tested negative. However, manager Neil Lennon, assistant John Kennedy and 13 first-team players are also self-isolating on a precautionary basis after being deemed close contacts, the club said.

Dubai has been added to Scotland’s travel quarantine list, with travellers returning from the country told to self-isolate for 10 days.

The rule, which came into effect at 4am on Monday, also applies retrospectively for passengers who have travelled to Scotland from Dubai since January 3, who have to self-isolate for 10 days dating from when they arrived back to Scotland.

Elite sports teams who go to foreign training camps are exempt from quarantine rules but the First Minister said that this will be reviewed.

‘So I’m not saying that’s happening only because of the Celtic situation but certainly that situation underlines the importance of us doing that.’

Trump orders ByteDance to sell off US TikTok assets