Drug-driver, 25, is jailed for five and a half years for killing her boyfriend, 23, in a horror smash outside SAS HQ after leading police on an 80mph chase through country lanes in thick fog

A young woman who killed her boyfriend after crashing her car trying to escape police while drunk and high on cannabis has been jailed.

Olivya Poole, 25, drove at speeds of more than 80mph trying to flee from an unmarked police car in thick fog on the evening of December 17 2016.

Her Volkswagen Golf smashed into the fence at Hereford’s SAS headquarters killing her passenger and partner Liam Thomson, 23, almost instantly.

Worcester Crown Court heard how she had taken anti-depressants, drunk brandy and smoked cannabis before she sped through country lanes.

She wept with her head in her hands as a judge jailed her for five and a half years after being found guilty of causing death by dangerous driving. 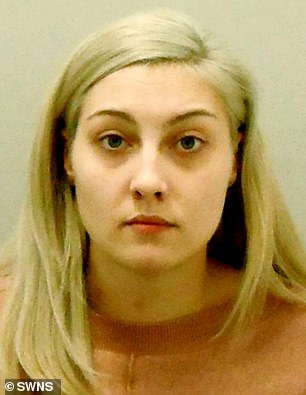 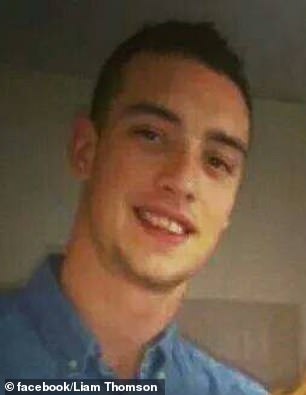 Olivya Poole (mugshot pictured), 25, was jailed for five and a half years after causing her boyfriend Liam Thomson’s death by dangerous driving. He is pictured right

Sentencing, Judge Robert Juckes QC said: ‘There’s nothing I can do in the sentence that I pass or the summary I make of the driving that resulted in this tragic death that can assist those who have suffered the loss.’  She was also banned from driving for five years.

The court heard how Poole, of Hereford, was chased by police for one and a half miles, averaging speeds of 72mph.

The car smashed into the fence, flipped and was struck by the unmarked BMW X5, but officers were cleared of any blame following an IOPC investigation.

A blood sample showed Poole had 2.7mg of cannabis per litre of blood in her system. The legal limit is 2mg.

Mr Thomson was pronounced dead by paramedics at the scene.

Mr Thomson described his son as a ‘gentle 6ft 5in giant’ and ‘rough on the outside but like melted chocolate under that ego’.

He said Liam’s daughter, who was born on Christmas Eve, just days after he died, would never be able to meet her father. 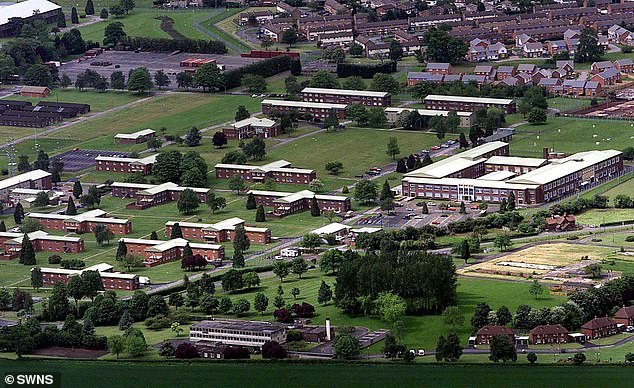 Mr Thomson said he initially thought the police were to blame when he saw the crash.

He said: ‘I don’t know if she deliberately lied to me and tried to take me for a mug, or convinced herself she was telling the truth.

‘The case has taken nearly three years to come to trial. It should never have got to this point as it was blatantly obvious she was responsible for what happened.’

Liam’s mother Lisa Thomson said her life changed forever on December 18, 2016, at 2.05am when police came to her door to tell her Liam was dead.

She said: ‘I collapsed to my knees. I was hysterical, screaming and shouting. I used to be bubbly and happy. Now I feel I’m a wreck.’

Mrs Thomson said she had to take six months off work and suffered depression and anxiety, struggling to sleep.

She added: ‘I often feel guilty for being alive. No parent ever wants to lose a child before them. Our whole family has been torn apart. I miss my boy with all my heart.’

Mrs Thomson said Poole had ‘shown no emotion in court and has never showed any remorse’ and had ‘shown herself to be a liar’.

Adam Western, defending Poole, said: ‘It was the very last thing in the world she wanted to happen. She has also lost the man she loved.

‘They were kindred spirits. Liam was Olivya Poole’s best friend. She still thinks of him each day. She misses him each day.’

After the hearing, Superintendent Sue Thomas, of West Mercia Police, said: ‘This is a tragic case and our thoughts remain with the friends and family of Mr Thomson.

‘The incident has been subject to an independent investigation by the Independent Office of Police Conduct (IOPC), who found no case to answer for misconduct against any of the police officers involved.’