The 2018 Nobel Peace Prize winners urge the international community to do more to end the use of rape as a war weapon. 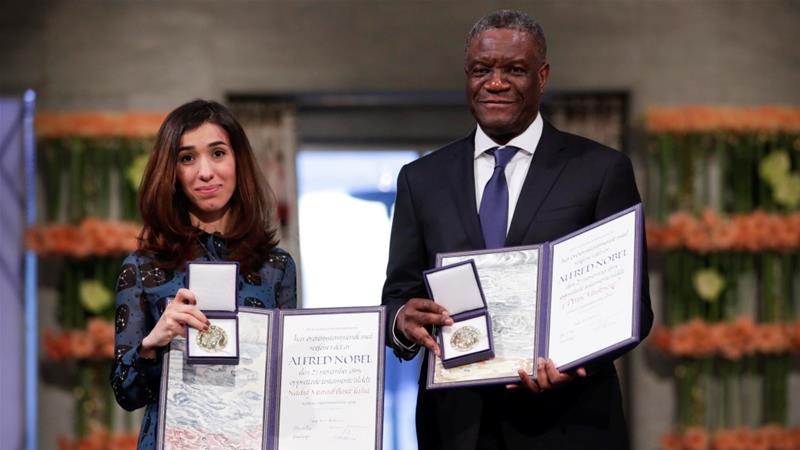 The world must stop turning a blind eye to the use of sexual violence as a weapon of war, Congolese gynaecologist Denis Mukwege urged, accepting the Nobel Peace Prize along with a Yazidi human rights activist on Monday.

Mukwege and Nadia Murad, a survivor of sexual enslavement by the Islamic State of Iraq and the Levant group, said at an emotional ceremony in Norway’s capital Oslo that the international community had to do more to protect women and children in conflict.

“If there is a war to be waged, it is the war against the indifference which is eating away at our societies,” said Mukwege, whose Panzi hospital in the Democratic Republic of the Congo’s war-torn east has treated tens of thousands of sexual violence victims.

He said the trade in the country’s abundant natural resources helped fuel the violence.

“We love nice cars, jewellery and gadgets. I have a smartphone myself. These items contain minerals found in our country. Often mined in inhuman conditions by young children, victims of intimidation and sexual violence,” Mukwege said.

“It’s not just perpetrators of violence who are responsible for their crimes, it is also those who choose to look the other way.”

He called for a global fund to provide reparations for victims and economic and political sanctions for those behind the violence.

Murad, who is advocating for the rescue of 3,000 Yazidi women still in captivity and the return of 300,000 Yazidi refugees to their native Sinjar region of Iraq, expressed her hope for “a new era”.

“I hope that today will represent a new era where peace will be everywhere and the whole world will work to develop a new roadmap to protect women and children and to eradicate sexual abuses.” 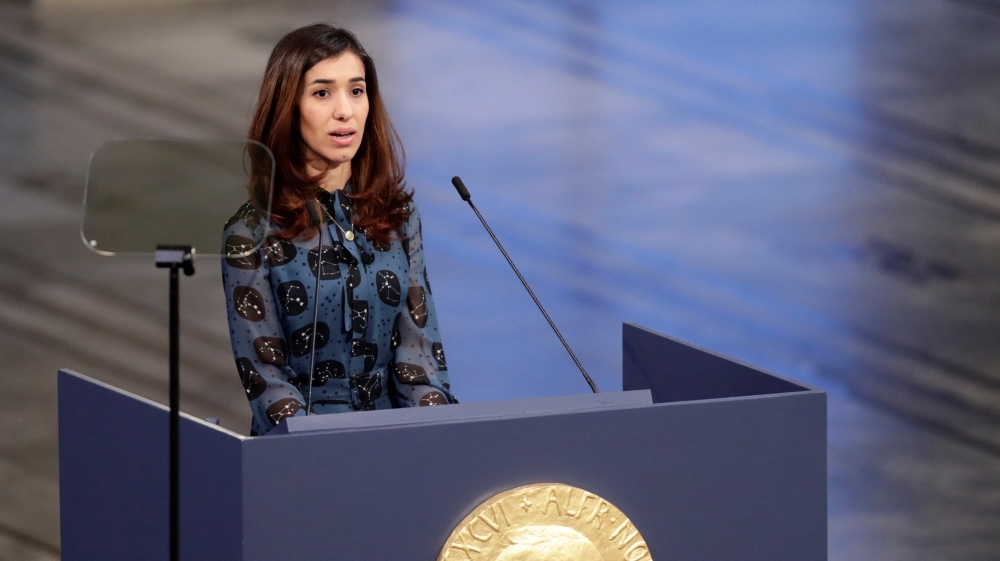 Al Jazeera’s Charlie Angela, reporting from Oslo, said Murad’s speech conveyed a sense of frustration. “She gave a very powerful lecture calling on the international community not to give her any more awards, but to do something now for her people.

“The half of her share of million-dollar [Nobel] prize money will go to her initiative, Nadia’s Initiative, which has been instrumental in getting nation-states to recognise the mass killings of Yazidis as genocide. And also for putting pressure on the UN Security Council to open an investigation into the war crimes committed by ISIL against the Yazidis,” she said.

According to Murad, more than 6,500 women and girls from Iraq’s Yazidi minority have been kidnapped, raped and traded. The 25-year-old herself was taken hostage by ISIL from her village, Kojo, in 2014 but escaped.

Kurdish Iraqi officials said in December 2017 that about half of those kidnapped were still missing and 47 mass graves containing the remains of Yazidis had been found since 2014.

No ISIL fighters have gone on trial for the atrocities.

Berit Reiss-Andersen, chair of the Nobel committee, tried to sum up Murad’s and Mukwege’s common struggle “in three simple statements”.

“Rape and other forms of sexual violence are unacceptable weapons in any and all warfare,” she said.

“Systematic rape as a part of a military strategy in war or conflict is a war crime. Those responsible for war crimes must be punished and the impunity they have enjoyed must end.”

Mukwege and Murad on Monday received the Peace Prize gold medals, diplomas and the nine million Swedish Krona ( $1m), which they will share.

A Texas husband and wife for 80 years are oldest living U.S. couple

The Arctic ice between Russia and the US is melting. What’s at stake at the top of the world?