Juan Alessi, who worked full-time for Epstein from 1991 to 2002, said Maxwell was with Epstein “95 per cent of the time” he was at the property. 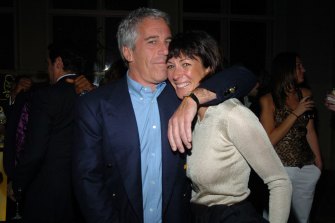 Jeffrey Epstein and Ghislaine Maxwell in New York in 2005.Credit:Getty

Maxwell, whom he called “the girlfriend of Mr Epstein,” primarily supervised him and advised him not to look the globetrotting financier in the eye, Alessi, 71, testified.

“Jeffrey doesn’t like to be looked at in his eyes,” Alessi recalled Maxwell telling him. “Just look at another part of the room and answer him.”

Alessi’s testimony came on the fourth day of Maxwell’s trial. Prosecutors say she recruited and groomed underage girls for Epstein to abuse between 1994 and 2004, and participated in some of the sexual encounters.

Maxwell, 59, the daughter of late British media baron Robert Maxwell, has pleaded not guilty to eight counts of sex trafficking and other charges. 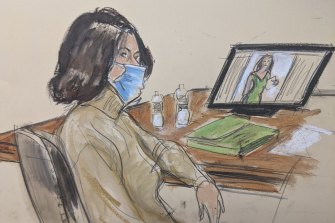 Ghislaine Maxwell is seated at the defence table while watching testimony of witnesses during her trial in New York. Credit:AP

Her lawyers say prosecutors are scapegoating her because Epstein is no longer alive. He killed himself at age 66 in a Manhattan jail cell in 2019 while awaiting trial on sex abuse charges.

Alessi’s testimony was expected to continue later on Thursday afternoon.

In a previous civil case against Maxwell, Alessi testified that Maxwell routinely prepared a list of places to go for the purpose of recruiting girls to massage Epstein, and he often drove her there, court filings show.

Jurors earlier this week heard from a woman known by the pseudonym Jane who testified that Maxwell groomed her for abuse by Epstein when she was 14 in the mid-1990s. Maxwell sometimes participated in those sexual encounters and touched her breasts, Jane said.

One of four accusers expected to testify in the case, Jane said the interactions would often begin as massages but then escalate.

Maxwell’s attorneys sought to highlight discrepancies between Jane’s testimony and her earlier interactions with law enforcement, in which she did not discuss Maxwell’s role. They have argued the accusers’ memories have become corrupted over time and that they have financial incentives to implicate Maxwell.

Earlier on Thursday, psychologist Lisa Rocchio testified as an expert witness about how underage victims of sexual abuse have often been “groomed” by perpetrators they know well.

Jane said Maxwell often took her to the movies and asked her about boyfriends. Rocchio’s testimony could bolster the government’s argument that this was not innocent behaviour.

“When children are sexually abused, most often it is not done through the use of physical force but rather through grooming and coercion in the context of a relationship,” Rocchio said, referring generally to grooming and not to Maxwell specifically.

'Hairdressers could be closed for another six months'

Elliott Wright says his restaurant was destroyed in arson attack

Everything you need to know about Covid restrictions and how they differ in England, Scotland and Wales