When Jaci Hicken landed a coveted cadet journalist job at the Latrobe Valley Express newspaper, her Twitter post announcing it elicited over a thousand ‘likes’ from friends and strangers across Australia. 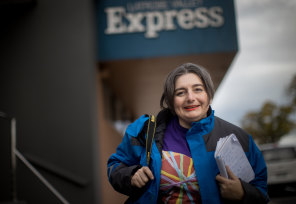 Storyteller: Jaci Hicken has embarked on a journalism career at 49.Credit:Simon Schluter

She added: ″⁣Before you say it (or think it) yes I am getting on a bit to be a cadet.″⁣

“Jaci is the first cadet I’ve appointed who is older than me,” her editor, Gregor Mactaggart, 41, said.

Hicken, who has previously worked in television as an outside broadcast engineer, as a chef and then ran a cooking school, is one of those brave souls who leap into the unknown and radically change careers later in life. 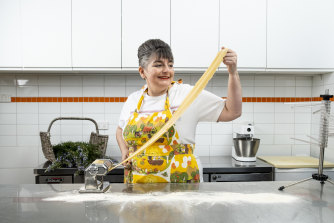 Brushing aside the notion that you can’t teach an old dog new tricks, they are following their dreams.

The Latrobe Valley Express is based in Morwell, 150 kilometres east of Melbourne. Hicken was raised on a local dairy farm and her cooking school, which she is still running on weekends, is in Mirboo North, in South Gippsland.

Mactaggart said Hicken knows the local area and a lot of people, and an older cadet might be more worldly-wise.

He said Hicken “isn’t afraid of getting stuck into tasks and [is] happy to talk to anyone”. 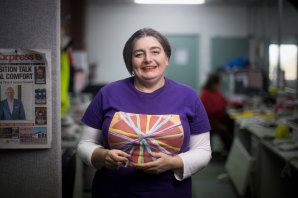 RMIT University behavioural economist Dr Meg Elkins says now is a good time to change careers as the unemployment rates are so low.

“This means that there are greater opportunities in a strong economy for mobility than there were pre-COVID.”

However, according to the latest available Australian Bureau of Statistics data, in the 12 months to February 2021, 975,000 or 7.5 per cent of employed people changed jobs, the lowest annual job mobility rate on record.

Among the 1.8 million people who left or lost a job, the most common reasons people gave were retrenchment, and “to get a better job or just wanted a change” (both 21.7 per cent). 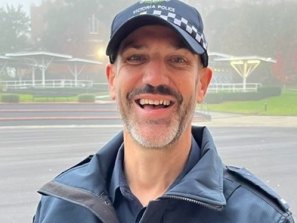 Nick Witkamp, who worked in construction for over 30 years, is now training to be a police officer.Credit:Victoria Police

Elkins, an actor turned academic, said when people get older they reflect on their purpose and goals in life and are less concerned about pleasing others.

She said COVID-19 had been the catalyst for many people to change careers. They audited what their skills, character, strengths and values are and searched for jobs that matched.

Nick Witkamp, 56, spent more than 30 years working in construction but is set to graduate as a Victoria Police officer in November.

He said his old career wasn’t fulfilling any more and his kids encouraged him to seek happiness. 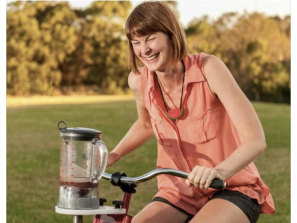 He joined Victoria Police as a police custody officer in 2019 and after three years working at police stations in Melbourne’s east is now becoming a police officer.

“With all my life experience I would love to be able to mentor young people in our community and change their perspective,” Witkamp said.

“When I joined as a PCO, I couldn’t believe how welcoming and supportive everyone was, age was not a factor,” he said.

“My colleagues were the ones who encouraged me and gave me the confidence to believe I could be a police officer.”

For most of her 20s, Leena van Raay, 41, of Northcote, was a medical research assistant at the University of Melbourne. But she wanted to get out of the lab and work in the community, and to do something creative.

And so 11 years ago she started a business, Bike n’ Blend — which pops up at festivals and events using standing bicycles to power blenders to make smoothies.

The business now operates in three states, at over 400 events per year. Van Raay is getting “the itch” to change again, perhaps to be a counsellor or study a masters of business administration.

“I’m glad I followed my passion, followed my dream, but also I was really savvy about making it work,” she said.

“I feel now that I’ve got an itch again, I feel I’m in the same position, that I need a change. I feel like studying counselling or psychology and moving careers again.

“I think I do like to take risks, more than the average person.”

To others thinking about changing careers, van Raay said: “I think if it’s something they can’t stop thinking about, absolutely. I think the risk of not doing it is worse than doing it. At least you’ll know.

“It’s a big jump. I’m finding it harder the second time around, to make that decision.”

Jaci Hicken said one reason for entering journalism was to learn new things, and so she completed a Diploma of Journalism at RMIT last year. And writing community stories appealed to her.

As did the newspaper job’s diversity, and in her first month alone, she has covered a court case, the topic of gun safety, an art exhibition, a 100th birthday, and profiled eight local federal election candidates.

She says she’s perhaps not as scared as a younger cadet would be, and more comfortable chatting to people such as senior police.

To other older prospective career-changers she says: “You’re not too old. You can go and do it if you want. You should do anything you actually believe in and want to do.