Teyana Taylor has done it all. Actually, she’s doing it all. From the early days of appearing on MTV’s My Sweet Sixteen and choreographing Beyonce’s “Ring The Alarm” video to singing and establishing herself as a style icon, she’s become an inescapable force in entertainment. At 31, the wife and mother of two is looking to enter a new stage in her life; one that focuses on family, her growth as an actress and filmmaker and her expansion as an entrepreneur.

Even as she manages a packed schedule, she’s filled with gratitude. A mindset of thankfulness keeps her balanced.

“I definitely take time out of my day just to give thanks to God for everything that’s come my way,” Taylor tells ESSENCE. “So nothing is ever too overwhelming for me. So I have busy, busy, busy, busy days, but I’m happy for it.”

Always the hustler, she never misses an opportunity to expand her empire. Most recently, Taylor has solidified a brand partnership with Xeomin, which debuts today. Touted as a safer alternative to other harsh fillers like Botox, the non-surgical anti-wrinkle injection helps to temporarily alter the appearance of frown lines and has become a staple in her beauty routine.

Taylor reveals she didn’t always have an interest in fillers. But after receiving several recommendations from friends, she decided to do her own investigation into facial injections. The process allowed her to confront many of the preconceived notions she had about the cosmetic procedure.

“I had never tried it,” she says. “As I started to do more research on it and they really broke it down to me what it was, I was like, ‘Oh yeah, I can use it.’ Because injectables kind of get a bad rep due to the people and their choices as far as getting them.”

“I was really happy with my results.”

One of the most common misconceptions about facial injections is that they can leave you with a “frozen face.” While that is true, those effects are typically only associated with Botox. More than that, fillers and the people who get them are also often met with criticism. When it comes to Black folks, there is an underlying notion that we are somehow above even needing the cosmetic procedure because “Black don’t crack.”

But aging is inevitable, even for Black women. Taylor maintains that while she still believes  “less is more” concerning beauty hacks, after doing her research, she felt Xeomin provided her with the best low-risk alternative to fight off her frown lines.

“I wanted to make sure I was with a company where I felt safe,” she says. “That was a big thing for me. I was really happy with my results, and especially for a person afraid of needles, it was super quick and wasn’t even really that painful.” 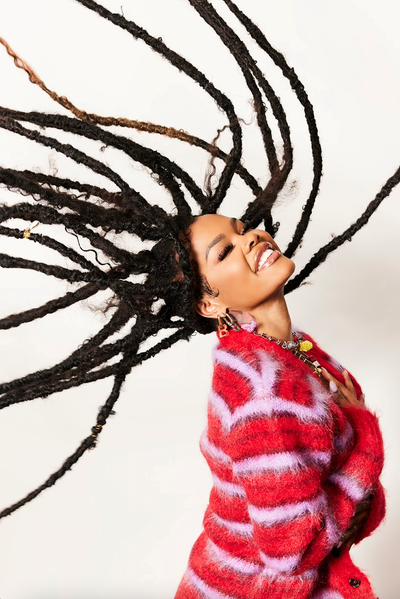 When it comes to her other ventures, Taylor has some exciting projects lined up for the incoming year. She’s landed a lead role in the film A Thousand and One, which is set to debut in March 2023.

Variety reports Taylor will portray an “unapologetic and free-spirited” mother named Inez, who kidnaps her six-year-old son Terry from the foster care system. The film will be the directorial, feature-length debut for writer and director A.V. Rockwell.

Taylor refers to the Lena Waithe-produced movie as a passion project, noting she put a lot of “blood, sweat, and tears in”  her upcoming role. She calls it “some of her best work.”

“I’m so excited,” she gushes. “And what’s crazy is I haven’t even seen the final cut of it yet..I put a lot into this. A.V. Rockwell is amazing.”

On the music side, Taylor says fans might be waiting a while before they get any new material. While she’ll always love making music, she shares that her focus isn’t solely dedicated to it.

“I do love to create, and honestly, going back on tour really made me miss it,” -Teyana Taylor on making music

For the past few years, Taylor has been working behind the scenes, directing a slew of videos under her “Spike Tee” moniker. Ultimately, she has plans to direct feature-length films, she says. Her passion doesn’t just stop at the director’s chair though—Taylor wants to make a more serious leap into television and film.

“I’m a storyteller, I always knew I wanted to do movies, but I knew that I had to earn my stripes and do what I needed to do,” she said. “I’m really in my directing and acting bag. So it’s like right now, as far as music, I can’t promise anything right now.”

Music isn’t completely off the table. She says it’s “looking really good in that department” and she hopes not to leave fans waiting too long. Still, she makes no guarantees.

“I do love to create, and honestly, going back on tour really made me miss it,” she said. “You know, it’s like, damn, I wanna make music just so I can go back on tour. Touring made me miss music. But I think, right now, I’m focused on being behind the lens. I’m just really stuck in that bag right now.”

She teems with excitement as she continues to talk about embarking on this new journey. She says it’ll mean all the more to her with her loving family by her side.

Whether she’s in front or behind the camera, Taylor keeps us on our toes. From her acting and music to her eclectic style and creative eye, she’s more in control of her career than ever, and we’re thrilled to see what she turns to gold next.

You should start doing weekly scalp treatments. We’ll tell you why

7 Trans Makeup Influencers You Should Be Following on Social Media