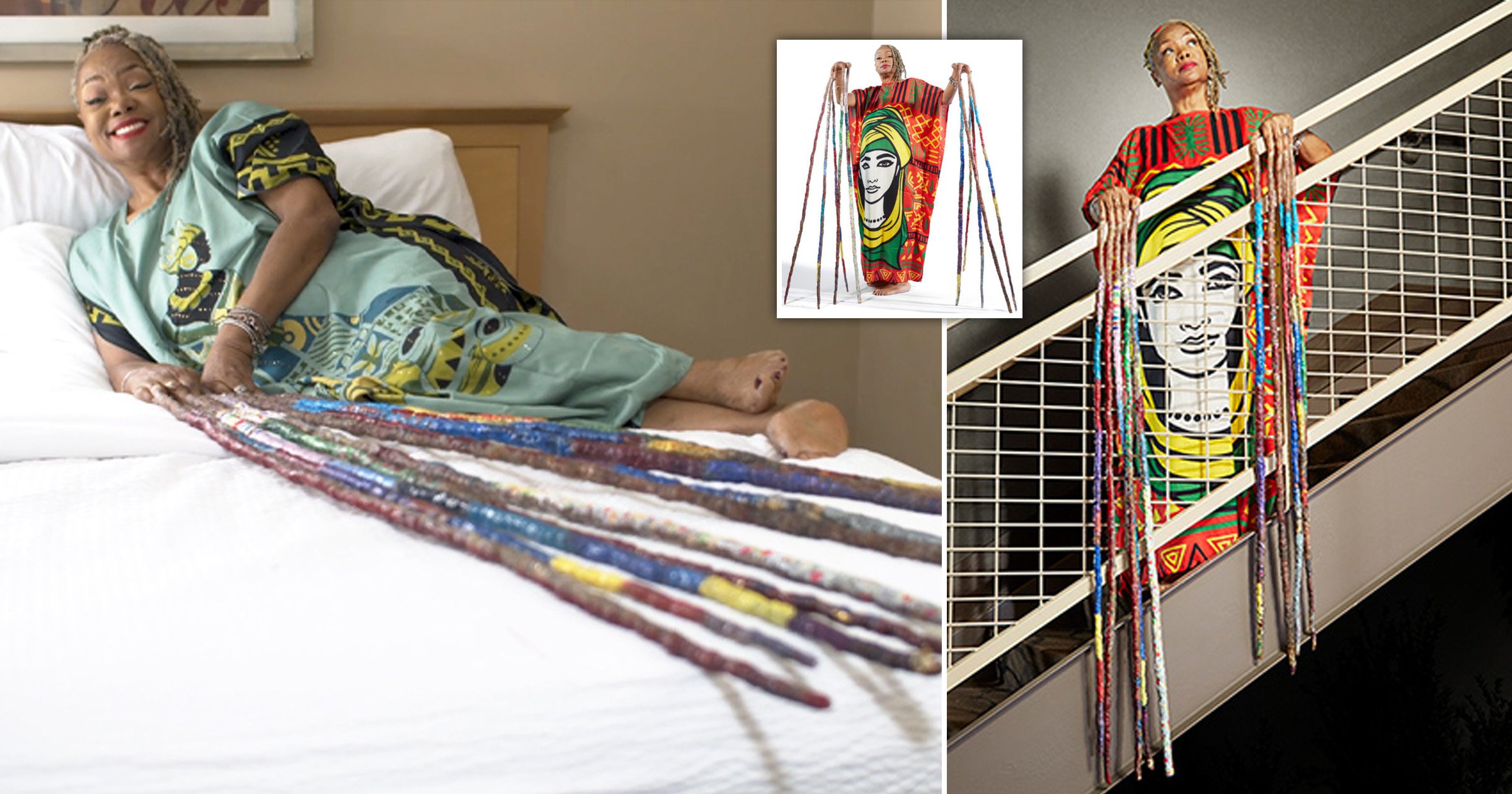 A Minnesota woman, who has broken the world record for the longest nails, says she struggles to zip up her jeans or open cans.

Diana Armstrong, 64, also can’t use public bathrooms because her long talons don’t fit in the stalls.

The record breaker hasn’t cut her nails for a quarter of a century, last trimming them in 1997.

When her daughter tragically died from an asthma attack at age 16, she vowed to never cut her claws again.

The teen would manicure Diana’s nails every weekend, so after her sudden loss, the grieving mother couldn’t bring herself to let anyone else take care of them.

Diana claims she even quit her job to focus on growing her nails, which now measure a whopping 42ft and ten inches collectively. That’s the length of a school bus.

Her longest nail is her right thumbnail, which reaches a lengthy four foot and six inches.

Taking care of her nails is no small task and if Diana feels like even adding a coat of polish can get pretty time consuming.

She told Guinness that it takes between four to five hours to paint her talons using 15-20 bottles of nail polish, not to mention the woodwork tool she needs to file them.

While Diana loves her long nails, they come with their downsides, including struggling to open the fridge door and no longer being able to drive because her nails don’t fit in the car.

The record-breaker also struggles to pick things up off the floor.

‘If I have to pick up money off the floor, I can pick up bills, but if I drop change on the floor, that will just stay down there,’ she told Guinness, adding that she often uses her feet to grab things.

‘I can pop open a can of soda but I need a knife. I drove a car but had to stick my hand out the window, so I don’t drive anymore,’ she said in an interview with Daily Star.

‘And in public restrooms, I need to use the biggest stall – my nails are usually longer than the regular-sized stalls.’

While her children didn’t understand her decision to grow them out at first, they soon became accepting of her long nails.

‘When she told us the back story, it kind of changed my feelings towards it,’ Diana’s daughter, Rania, explained.

‘Because just as much as she missed my sister, I missed her too. So, if that’s her way of holding on to her, then I accept.’

Diana added: ‘I think she [Latisha] would be proud of me because she’s the last one who did my nails.

‘That’s who I think of when I grow my nails, is my daughter.’

Diana is used to getting stares when out in public, and said people often ask her if they can take pictures of her impressive nails.

She used to be self-conscious about the attention she received but is now comfortable with her nails.

‘The story behind her record is as fascinating as it is heartbreaking, and Diana’s determination to honor her daughter’s legacy in her unique way is inspiring,’ Guinness World Records Editor-in-Chief Craig Glenday said.

‘Family means everything for Diana, and she’s lucky to have gathered around her a wonderful support network… which is what you need when each of your fingernails is longer than a ski pole.’

Texas woman Ayanna Williams used to hold the world record, but decided to cut her nails off last year after growing them out for three decades.

But Diana insisted she’s never getting rid of hers. She added: ‘My nails are a part of me. I can’t ever imagine cutting them off.’