After Itzin’s passing was confirmed by his representative, executive producer Jon Cassar turns to social media to remember the President Charles Logan depicter on the FOX drama series.

AceShowbiz –Gregory Itzin has died at the age of 74. A representative for the actor, who was known for his roles as President Charles Logan on the FOX drama series “24” and agent Virgil Minelli on “The Mentalist“, confirmed to The Hollywood Reporter that he passed away on Friday, July 8 due to complications during emergency surgery.

“24” executive producer Jon Cassar was among the first to pay tributes as he remembered his friend and described him as “one of the most talented guys” he had ever worked with. He tweeted, “My friend Greg Itzin passed away today.”

“He was one of the most talented actors I had the honor to work with, but more than that he was an all around great guy,” Jon continued mourning. “He’ll be missed by his 24 family who had nothing but love and respect for him. You made your mark, now Rest In Peace friend (sic)” 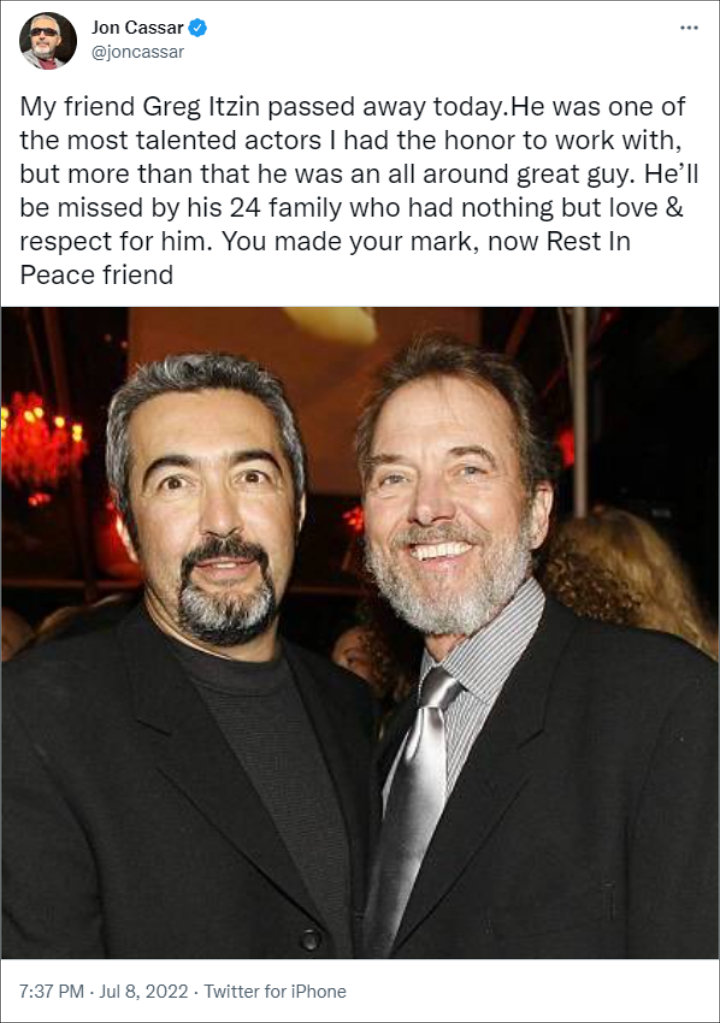 Jon Cassar mourned the loss of Gregory Itzin after the actor died at 74.

Gregory was survived by his wife Judie Itzin, whom he had been married to since 1979, and their two children 39-year-old Wilke and 36-year-old Julia. Both of his children have also carved out careers in the acting world.

Following his father’s death, Wilke wrote on Instagram, “It is with an incredibly heavy heart to announce that my father Gregory Martin Itzin has passed on. I will never feel like we had enough time together.”

“I love you pops and I really don’t know what I’m going to do without you. You were loved by all and we will miss you tremendously,” he added. “Although bittersweet, I am glad we got to spend these last few days together.(sic)”

During his career, Gregrory also had a recurring role as Theodore Hannigan, in the final two seasons of mammoth sitcom “Friends” and starred alongside Lindsay Lohan in the thriller “I Know Who Killed Me” back in 2007 before making his final on-screen appearance in an episode of medical drama “The Resident” back in 2019.