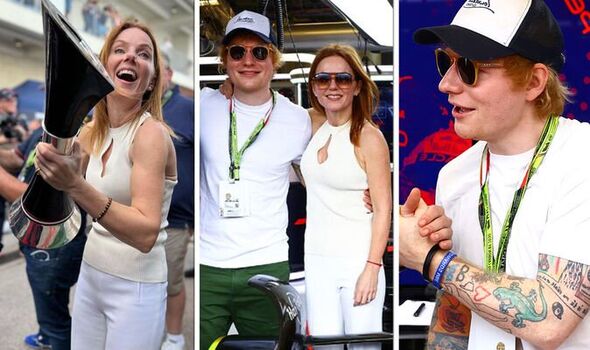 Ed Sheeran and Geri Horner were escorted around the Formula One pits before the race on Sunday by the Spice Girl’s husband Christian Horner, the Team Principal of Red Bull.

Ed Sheeran and Geri Horner were escorted around the Formula One pits before the race on Sunday by the Spice Girl’s husband Christian Horner, the Team Principal of Red Bull.

The Halifax-born singer dressed for the Texas heat in a simple white shirt, green chino trousers and a black and white baseball cap, accessorised with his blue Jordan sneakers.

Geri on the other hand donned white trousers, a cream-coloured shirt with a circular cutout and tan shoes while her husband dressed in his work uniform.

The two iconic singers led a string of A-list celebrities geared up to watch the event at the Circuit of the Americas.

Ed took a moment out of his busy schedule ahead of his Mathematics tour starting early next year to pose with Formula One legends Sergio Perez and Max Verstappen.

The Spice Girl shared a picture of her and Ed in the pits on her Instagram, hinting towards their contributions at the track with the caption “Ginger strategy”.

The two singers spent time in the Red Bull pits

Ed posed for photos with Formula One stars

Trading the stage for the tarmac, Ed posed with Max Verstappen who placed fourth in the American Grand Prix.

She captioned a moment with Ed in the pits: “Ginger strategy,” and later posed with the trophy while congratulating her husband on Instagram as Max Verstappen placed first for the Redbull team.

The Spice Girl’s husband is currently the Team Principal at the Red Bull Formula One team.

Other celebrities also visited the track over the weekend

So far this year the couple have been spotted at the British, Canadian, Monaco, Miami and now the American Grand Prix.

Mick Jagger's son Deveraux, 4, is the spitting image of his rocker dad