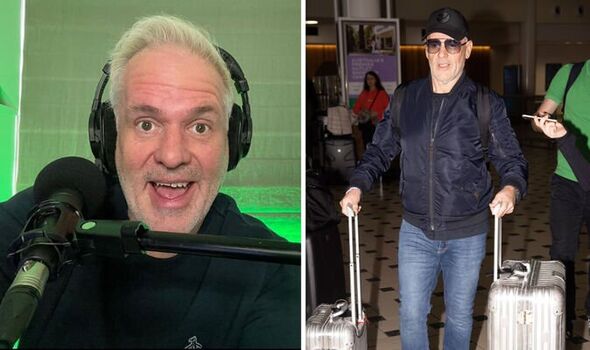 Chris Moyles has admitted he doesn’t think he’ll be the best campmate on I’m A Celebrity… Get Me Out Of Here! 2022 as he finally addressed signing up to the show. The 48-year-old has been pictured arriving at Brisbane airport hiding behind sunglasses and wearing a cap.

Ahead of the new series being aired, he revealed what he thinks he’ll be like on the show.

Speaking on his Radio X breakfast show, Chris told former campmate Vernon Kay that he only recently realised how bad his veritgo was during a recent trip to Go Ape.

He spilled: “I papped myself and I realised I’m more scared of heights than I actually genuinely thought I was.”

He also told press that he hasn’t asked what his family think about him signing up for the show, but believes they’d be “more nervous” about him doing Antiques Roadshow.

Vernon told the new campmate he “had a blast” on the show and would urge those keen to do it not to hesistate.

He continued: “Yeah, it’s awful, as in the cockroaches, creepy crawlies, spiders and snakes and all that palaver, but as an experience it’s probably one of the best I’ve ever had in telly.”

Chris has arrived in Australia 10 days before the show is set to kick off.

ITV have asked celebrities to arrive around a week in advance so they can isolate and also be tested for covid.

If they were to be unfortunate and pick up coronavirus on the flight over, it is hoped there might be enough time to isolate and still test negative before the series starts.

An ITV source said: “The celebrities are arriving earlier than previous years to isolate and test for covid before entering camp.”

Chris caught Covid earlier this year which forced him to present the show from his home.

At the time, he was inundated with get well soon messages but reassured fans all was good.

For the first time in two years it will air from its original location in Australia.

Due to Covid-19, it has been filmed in Gwrych Castle for the past two years.

I’m A Celebrity…Get Me Out Of Here! Starts on ITV on November 6.