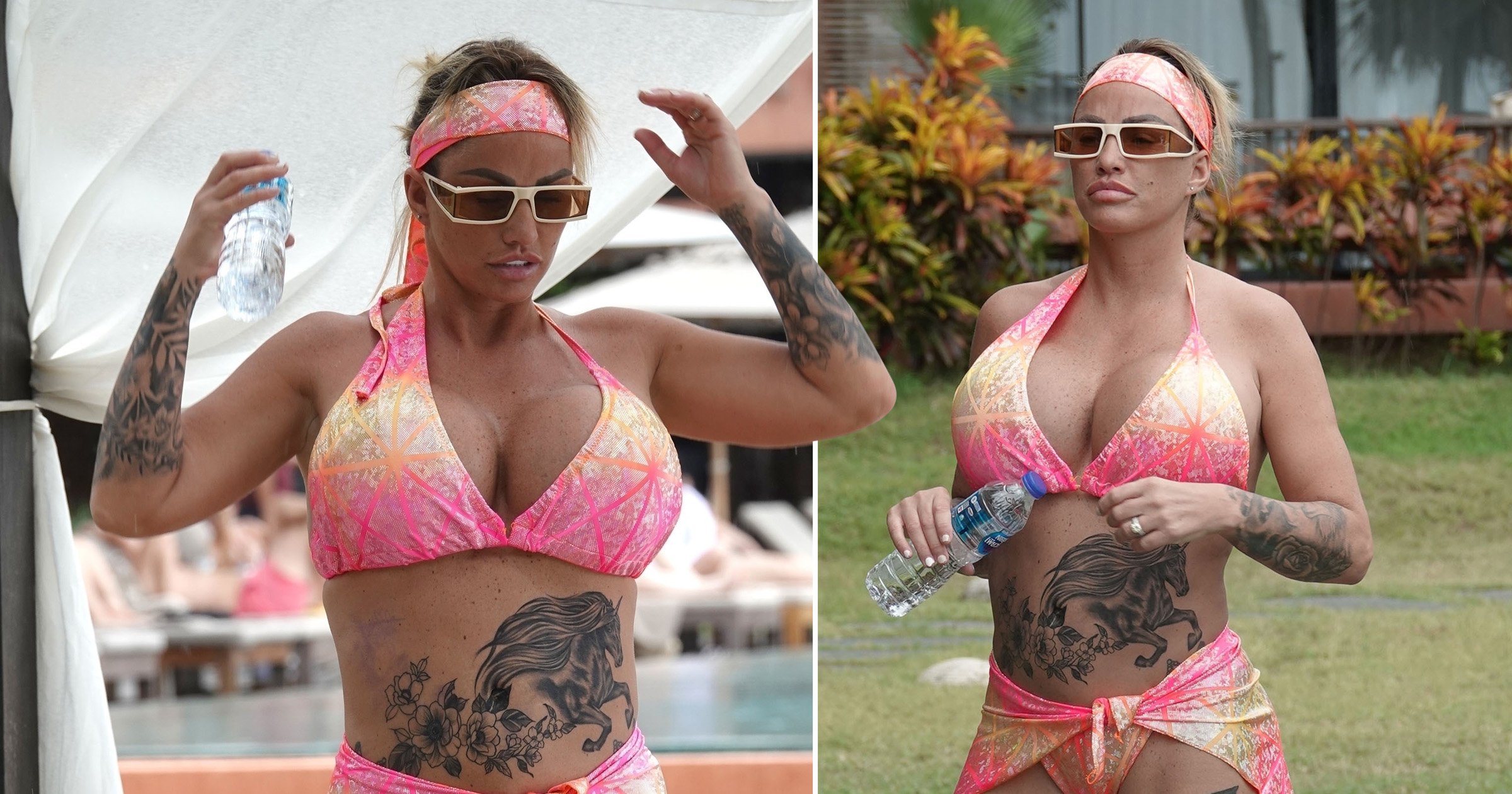 Katie Price has debuted some new ink (or the world’s most realistic temporary tatts!)

The former glamour model has been soaking up the sun in Thailand recently, jetting off on her hols with boyfriend Carl Woods following a string of legal woes.

As well as coming home with a tan, it seems she might have expanded on her tattoo collection while she was there, as she’s been seen with designs sprawling across her stomach and thighs.

The 44-year-old was photographed lounging by the pool, donning a sparkly pink bikini, complete with matching sarong and headband.

She also sported eagle wings on the front of both of her thighs, sprawling all the way down to her knees.

Across her stomach, being the horse lover she is, Katie opted for a galloping stallion inking with floral detailing, which also covered her belly button.

If these new inkings are real, they can’t have been easy to sit through!

The tattoos join a wide range of designs on Katie’s body, including a garter on her upper thigh and a portrait of her boyfriend Carl on her arm – the car salesman also has multiple sketches of Katie on his own skin.

Katie – who is now back on home soil – has been sunning herself in warmer climates over recent weeks after appearing in court for breaching a restraining order.

The mum-of-five narrowly avoided jail and was handed an 18-month community order after she contacted her ex Kieran Hayler’s fiancée Michelle Penticost and calling her a ‘gutter s**g’.

Michelle took what many believe was a swipe at Katie, who missed her and Peter Andre’s daughter Princess’s 15th birthday last week when she jetted off to Thailand.

‘They will remember who bothered to rearrange their schedule, to make inconvenient choices, and who made them a priority.’

Michelle then added her own ‘praying hands’ emoji underneath.

Adding to Katie’s legal troubles, she was also charged with speeding after exceeding the 60mph speed limit in September last year.

She was later charged with failing to provide information in January, but had charges against her dropped.

The former I’m A Celebrity… Get Me Out Of Here! star has been keeping a relatively low profile since the dramas of her personal life began, announcing that she’s taking a break from social media.

She shared the news that she is taking a social media break for ‘personal reasons’, making the announcement on her Instagram page.

Katie told her millions of followers that she needs to ‘take time off’ while thanking them for their support.

‘I will be coming off all social media for a period of time. I need to take time off for personal reasons,’ she wrote.

Reps for Katie Price have been contacted for comment.

Kim Kardashian Reveals the High-Tech Baby Monitor She Uses at Home – Get It Now On Sale!

Reba McEntire: Why Did Dolly Parton Think She Was 'Some Squirrel'?