Prince William has been pictured in a never-before-seen photo with his three children that was released by Kensington Palace in order to mark Father’s Day.

The snap, which was taken when the family holidayed in Jordan back in 2021, features the group looking happier than ever as they posed in the sand. In the incredible family picture, the Duke has his arms around his eldest children, Prince George, eight, and Princess Charlotte, seven, while youngest child Prince Louis, four, adorably sits on his father’s shoulders.

William wore a green top, while George styled out a khaki top, with Charlotte rocking a beautiful dress and Louis in a striped top; all of the boys in the photo went with a pair of shorts for the warm weather.

The Duchess of Cambridge, who is a keen photographer, is not in the photograph. It’s unknown whether she was the one who took the photo.

SEE: 11 cutest photos of royal children and their beloved nannies

Last year for Father’s Day, the Cambridges released a video featuring key family moments, including one where the Duke stood with his children ahead of a Trooping the Colour ceremony.

There was also a photo of the Queen and Prince Philip relaxing at Balmoral, a snap of Kate being walked up the aisle by her father, Michael Middleton, and one of Prince Charles playing with a young William and Harry. 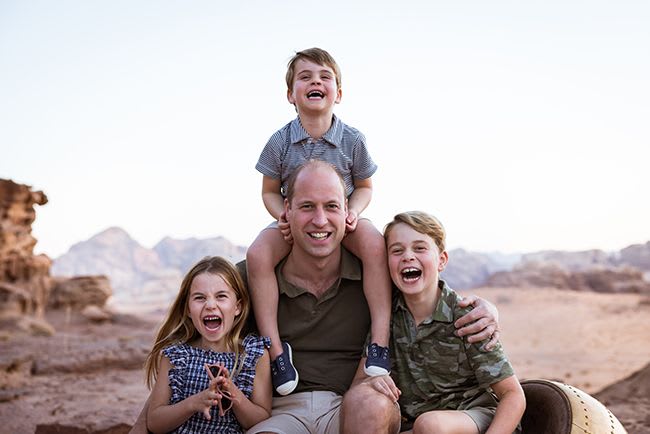 The Duke and Duchess have previously shared insights into their holiday to Jordan, with the family choosing an image taken on the break to feature on their Christmas card last year.

MORE: Duchess Kate recalls what motherhood was like when George, Charlotte and Louis were ‘tiny’ babies

In the family photo, Kate was her typically chic self in an olive green dress, while the rest of the family were dressed in the same outfits as they were for this latest one.

The picture was shared on the Cambridges’ social media accounts and read: “Delighted to share a new image of the family, which features on this year’s Christmas card.”

Cloris Leachman Dead at 94: Celebs Pay Tribute to Her Memory