Queen Rania of Jordan was recently in New York City, and during her time in the Big Apple she was interviewed on Good Morning America.

Interviewing the royal were stars Amy Robach and TJ Holmes, and they joked that they could all be “jet-lagged together” with Amy and TJ having gone to London in order to provide coverage following the death of Queen Elizabeth II. During the interview, Queen Rania spoke about her bond with the late monarch, calling her a “pillar of strength and stability”.

WATCH: Study the style evolution of Queen Rania of Jordan

She also addressed the issue of misinformation, but the interview ended on a happier note as she addressed her family’s upcoming weddings.

Joking that she wasn’t putting any “pressure” on her children, she spoke about how she would love to become a grandmother, saying that she would be “fun”.

Although this portion of the interview had the hosts in stitches, it appears that the royal continued with her jokes after the segment finished.

TJ shared several photos of what happened after cameras stopped rolling, with him nearly falling over in laughter as Rania talked.

The royal had TJ and Amy in stitches!

He teased: “The interview was great. But the post-interview chat with @queenrania was a hoot!“

TJ’s followers praised the interview, with many saying how “great” the talk was and how much “respect” they held for the Jordanian royal.

Rania, who did the interview in a gorgeous pastel suit, was in New York City to attend the Annual Concordia Summit. 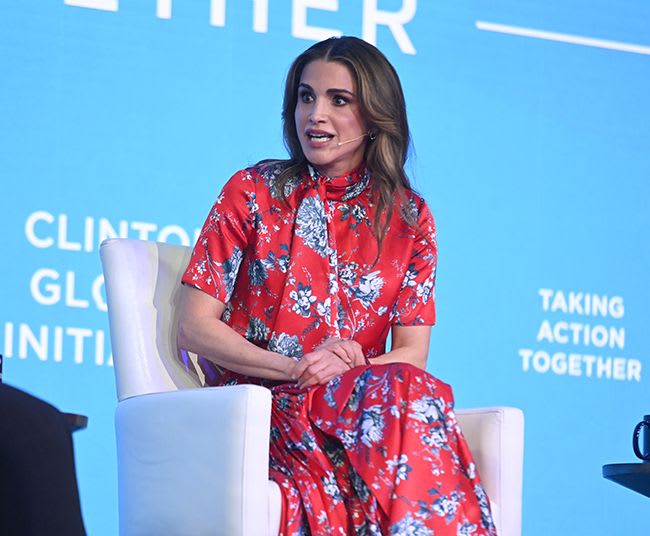 The royal looked as gorgeous as ever in a luxury set crafted by Italian fashion house, Fendi.

WOW: Queen Rania stuns in her most elegant dress look to date

She paired the luxurious garment with Fendi’s ‘Black Jersey Skirt.’ Boasting a soft touch, a midi length and a pencil silhouette, the low-key number allowed the queen’s statement shirt to speak for itself.