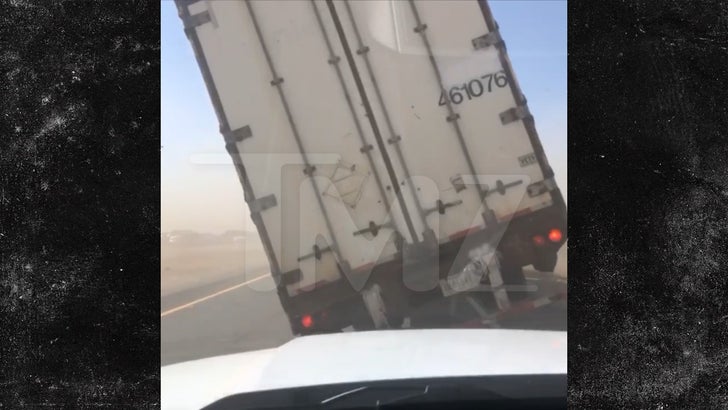 There IS something worse than a SoCal traffic jam — try getting caught behind a semitruck as powerful wind tosses it like a rocking chair, nearly tipping it over right in front of you!!!

The incredible footage shows the big rig leaning and rocking in the wind, and as you can see, at one point the entire trailer was lifted up on one side as it came oh so close to falling over.

Erik, the guy who shot the video, tells us he was driving onto the 210 Freeway Monday in Fontana, CA — an hour east of L.A. — when he noticed the semi struggling to cut through the strong Santa Ana winds, which gusted up to 96 MPH that day.

Erik says he started filming the semi, thinking it was only a matter of time before it blew on its side. He was dangerously close to being right.

The worst part for Erik was there was already bumper-to-bumper traffic on the freeway due to multiple other semis flipping in the wind.

No such thing as a boring commute ’round these parts.