MYSTERIOUS sirens of the sea are brushing their flowing hair and flexing their long, scaly tales as they re-emerge from a land-locked lockdown.

These are not the stuff of myth, they are the 500 professional mermaids in the UK desperate to get back in the water. 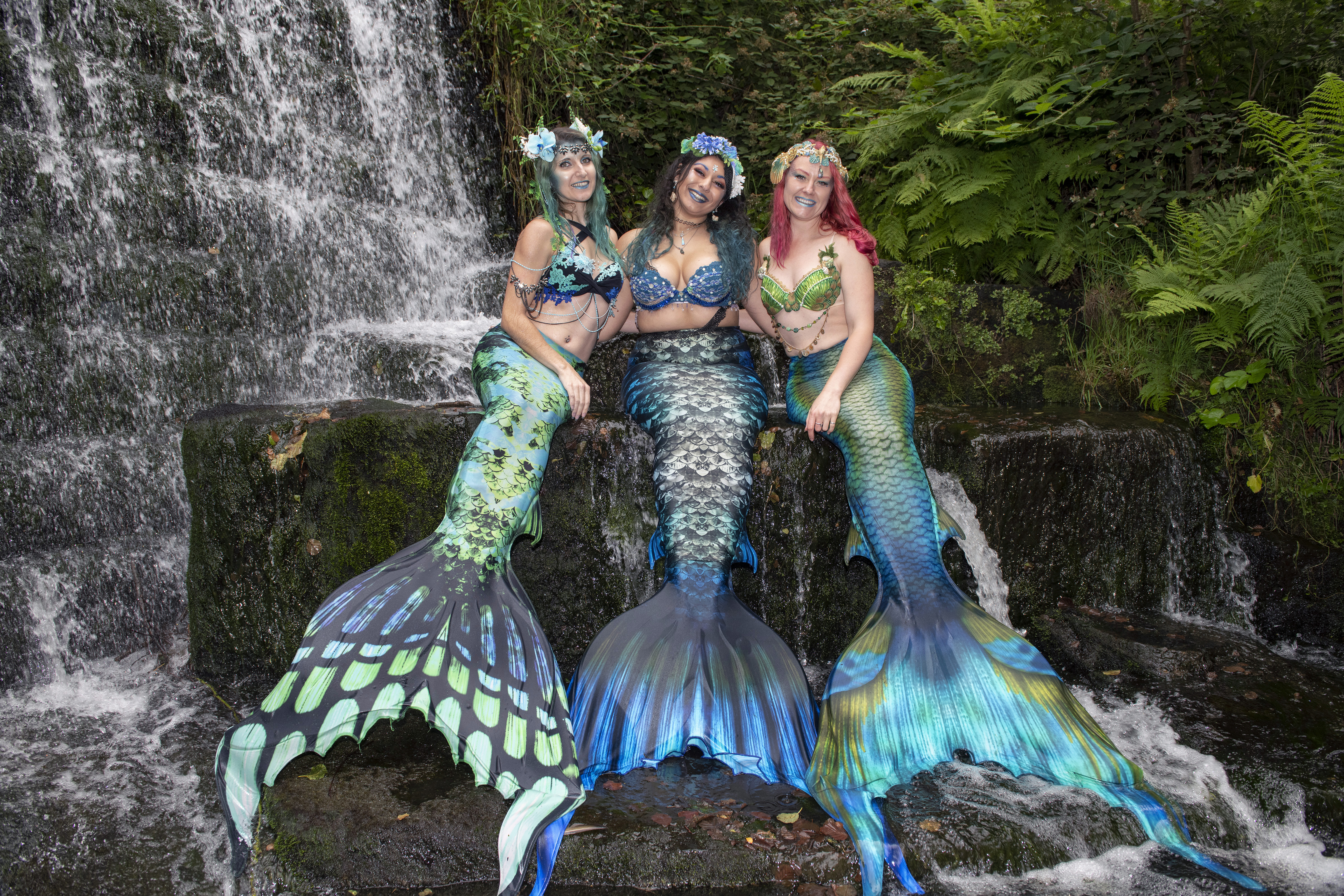 The half-women, half-fish can be spotted at kids’ parties, pageants and aquarium shows.

And today they take us on a deep dive into their world — including holding your breath for minutes at a time, tails which can cost up to £5,000 and the dreaded pervy “merverts”.

Mermaids across the country were, er, gutted on March 23 when pools and aquariums were ordered to shut by the PM to stop the spread of coronavirus.

But now the country is on the bounce back, and as pools reopened on Saturday, they are hopeful they will soon be back making a splash. 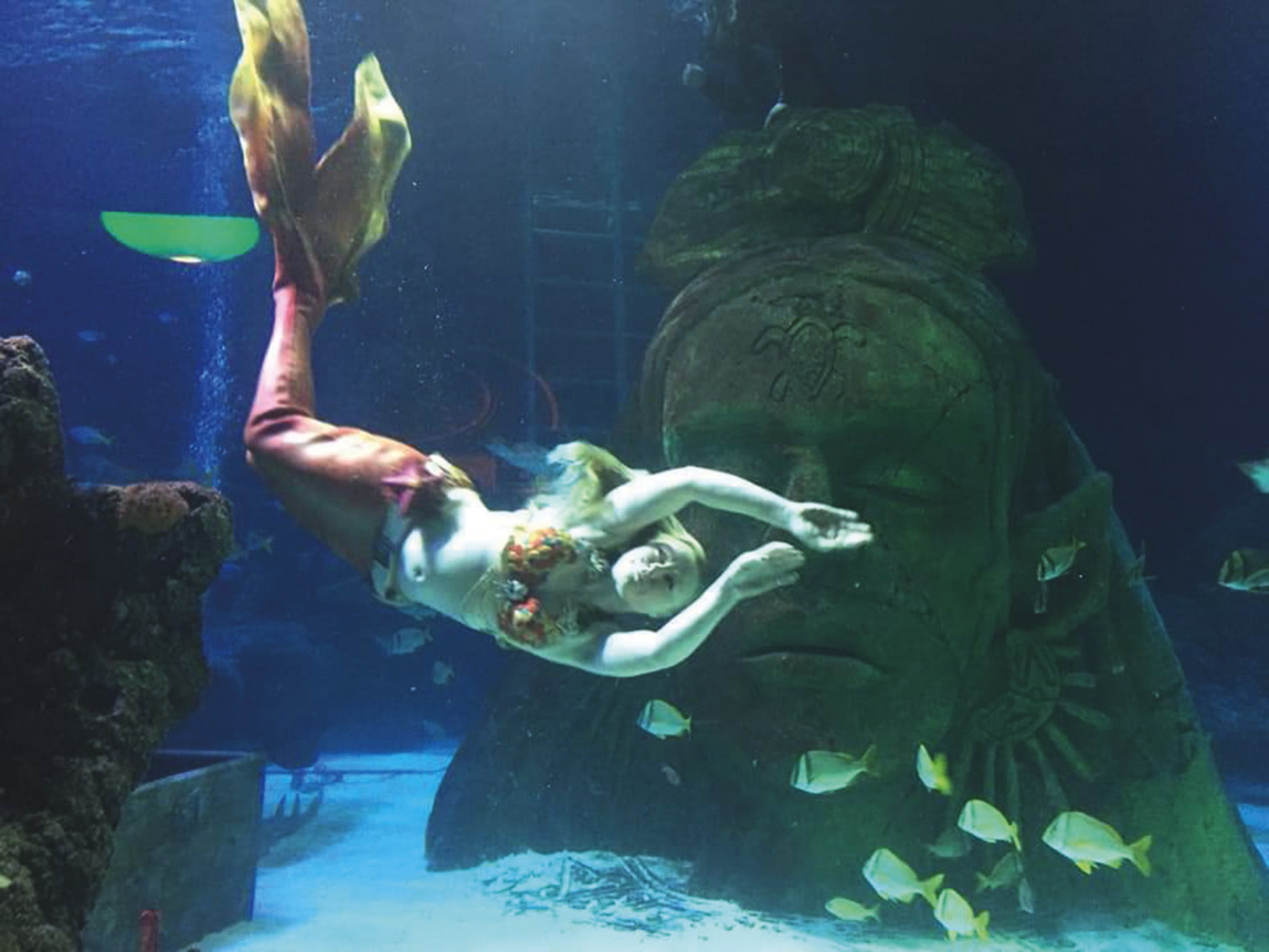 She says: “It’s been tough, there’s a lot of dried-up mermaids at the moment. We are itching to get back in the pool.”

Laura, also a pole dance instructor, has been performing for two years with friends and fellow mermaids Yasmin Awan, 25, and Laura Siddall, 35, both from Sheffield (69 miles from the sea).

Each takes on a “mersona”, and in the water they can do flips and give hearts underwater to spectators.

Laura Siddall, also a postie, says her mersona Luna Tide-Swell was washed up on the shore in Scarborough, North Yorks.

Yasmin, a medical student, has named herself Athena Storm, a warm-water mermaid from the Aegean Sea around Greece.

She says: “You can’t under any circumstances break character in front of the kids because it would steal the magic from them. We are all very, very conscious of that.

“You have to be prepared for absolutely anything. Kids will touch you and see if you are real and I had one little girl who was obsessed with the sequins on my bra.”

“Parents with the kids that are a little bit nervous say it’s kind of like meeting Santa or their idol.

“They have always been told ‘mermaids aren’t real, unicorns aren’t real, all this fairytale fantasy world is made up’. Then they actually see you, and they realise you are real.”

Pro mermaiding isn’t just about sitting pretty, though. They need incredible physical strength to swim with at times heavy tails. 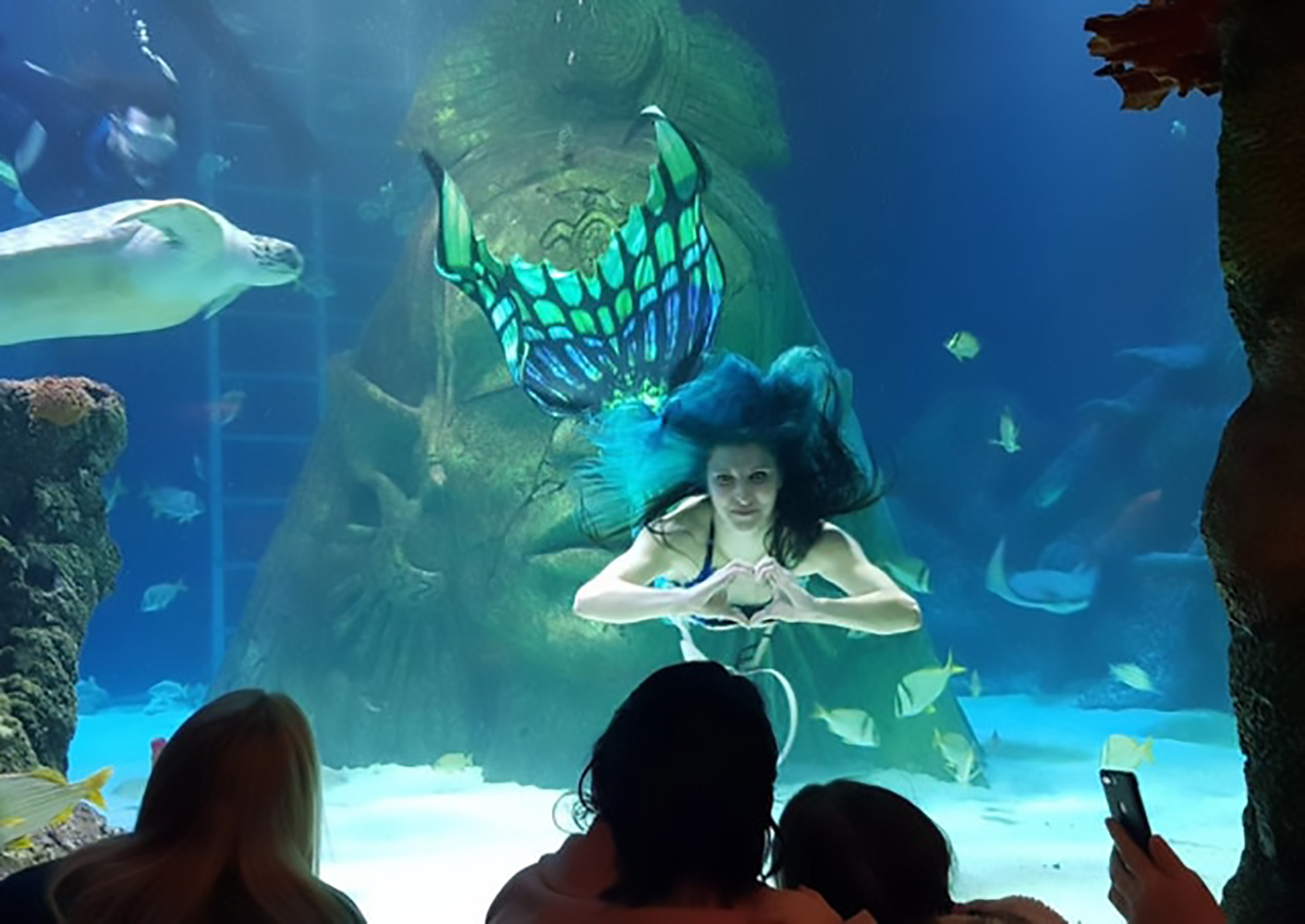 Yasmin and Laura Siddall train fortnightly and practise their flips and somersaults in an 18ft deep Olympic diving pool.

Laura Siddall, who was crowned Miss Mermaid International in 2017, holds the pageant record for swimming 114metres — nearly 375ft, just over the length of a football pitch — in one breath.

Yasmin adds: “A lot of people think you just stick on a tail and swim around, but sticking on a tail and learning how to swim properly is hard.

“There’s a technique to it called the body roll. You aren’t allowed to bend your knees because it kinks the tail and it doesn’t look right.” 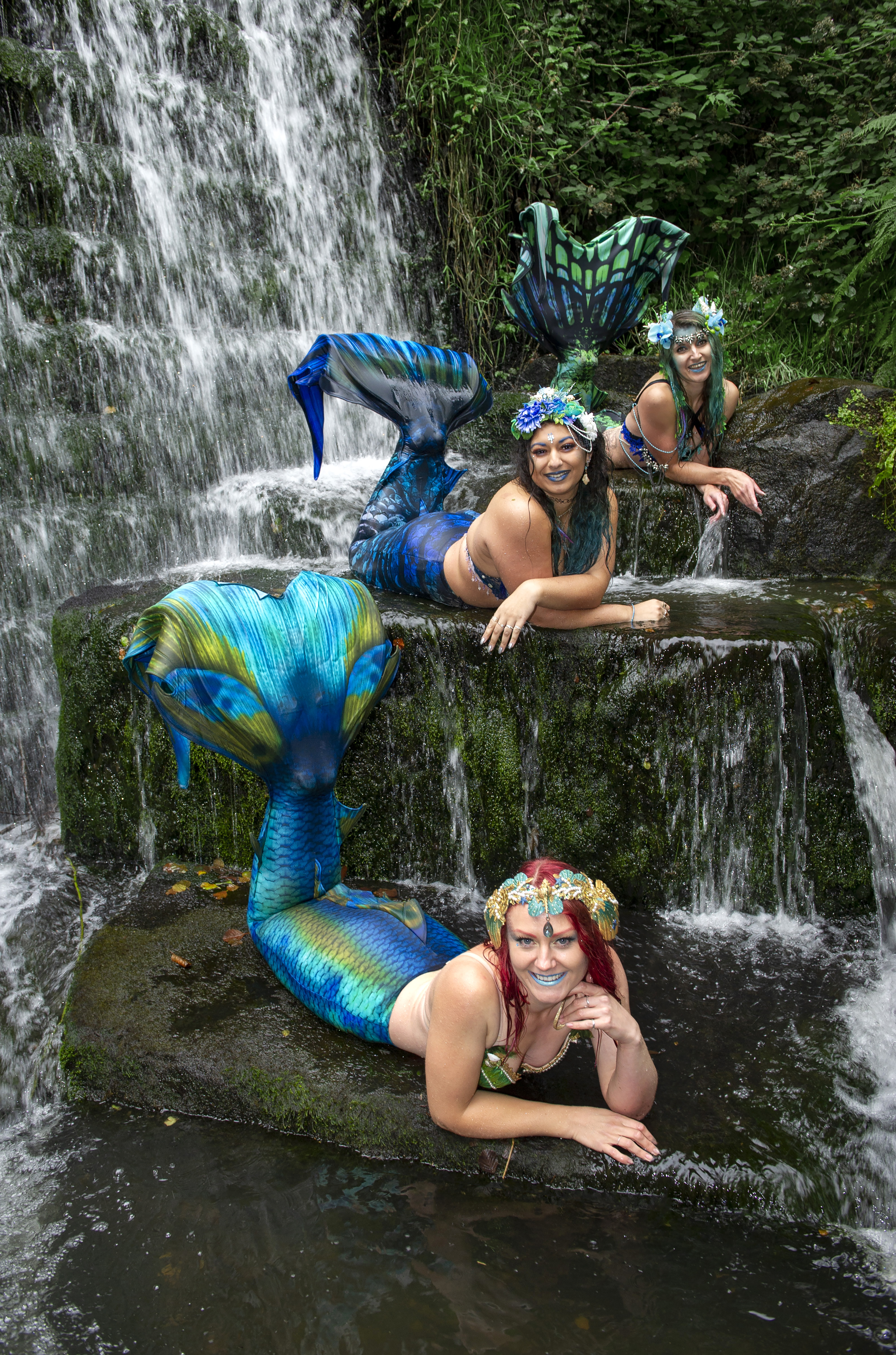 All professional mermaids need to master swimming in a monofin — referring to their flippers as swimming “in tail”.

Silicon ones can cost up to £5,000, but Yasmin and and her friends have opted for more affordable and flexible fabric and latex models.

She says: “I won’t have silicone or latex tails primarily because they tend to be more expensive. I would love one but I think fabric is more transportable, though silicone and latex ones look more realistic.”

Laura Siddall, a former designer, took ten months to make her own tail from latex.

I was in a hotel with a pool and put the tail on, jumped in and absolutely fell in love with it

She says: “I researched the materials and spent about five months studying it then another five actually making it.

“I was in a hotel with a pool and put the tail on, jumped in and absolutely fell in love with it.”

As undersea creatures, the mermaids have to master the art of holding their breath for minutes at a time while performing tricks.

Laura’s personal best is staying underwater for a staggering four and a half minutes — while the others have reached up to three minutes at a time. 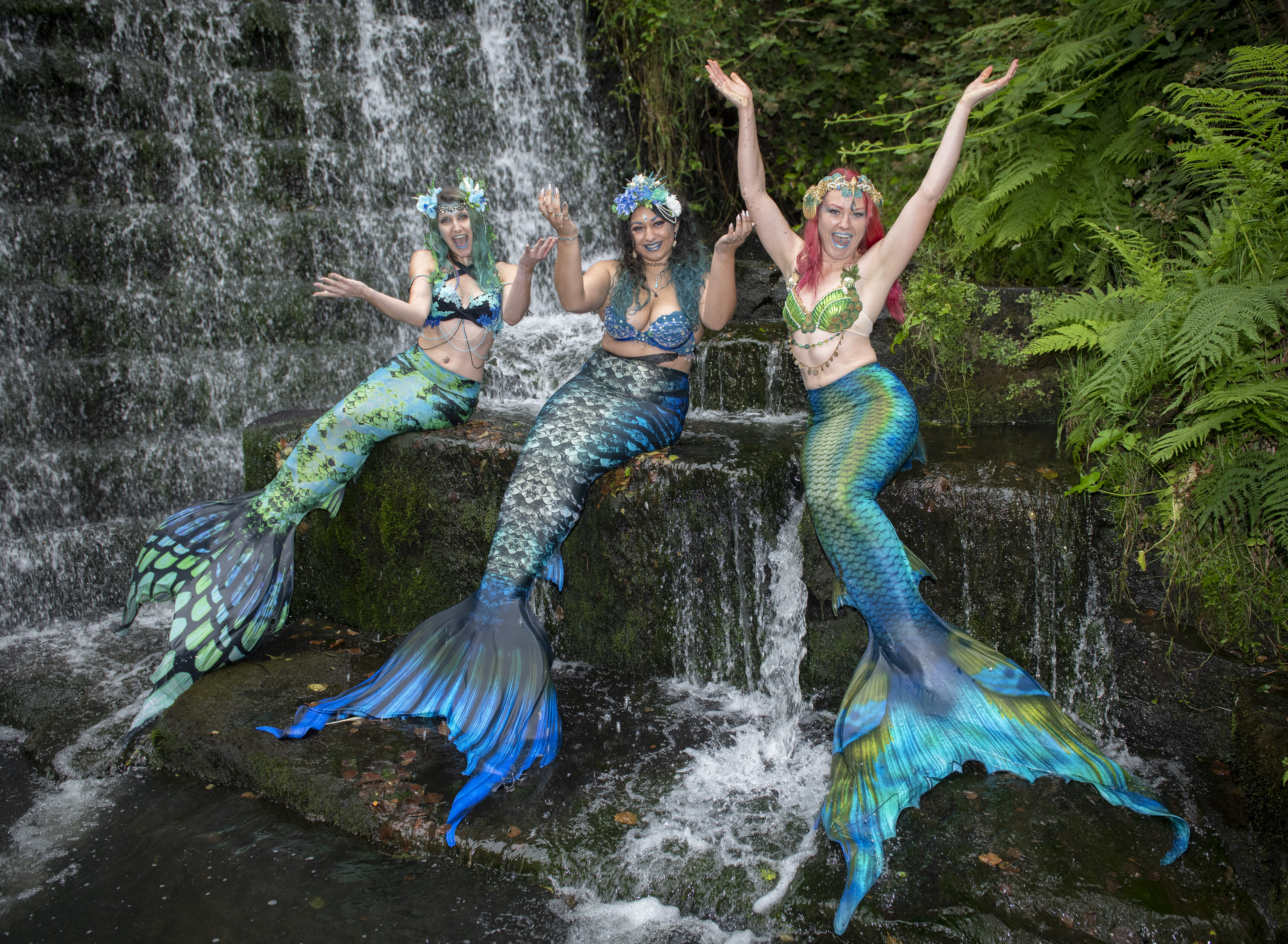 Laura says: “You have to clear your mind and completely relax. That’s the hardest part, switching your brain.”

Yasmin adds: “You breathe into your belly, then your chest, then all the way up to your throat.

“I need to get training again. I have been very lazy during lockdown.”

Goggles are a huge no-no when they are in the pool — let’s face it, who has ever seen a mermaid wearing goggles. 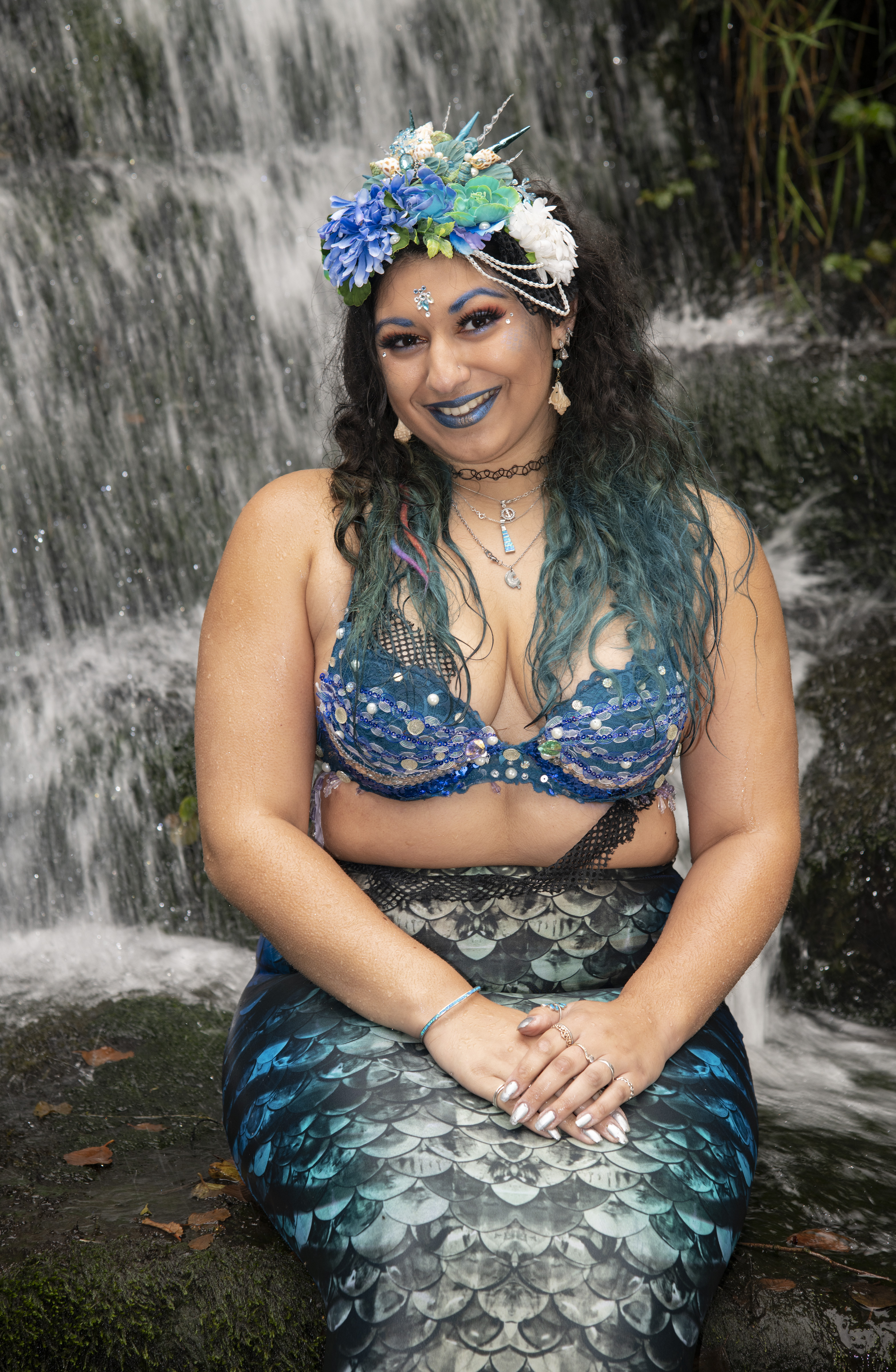 Yasmin says: “I like to train with a mask or goggles on because chlorine is obviously damaging to your eyes. But when we are performing in an aquarium you can’t wear eye protection because it ruins the aesthetic.

“Everything is a blur. You just see shapes and shadows but you are acutely aware of what is around you.”

While mermaids are known for luring sailors with their siren call, these girls say their fans can at times get a little too enthusiastic.

While most male admirers are respectful, a few send sleazy messages over social media.

Yasmin says: “Sometimes it is harmless. They just come up, they love it and say it is amazing, and that is fine.

"Sometimes it is not and we call them merverts. I have had messages which I have had to block and delete.

“We are such an amazing community that we will let each other know.

“We will say this person has been contacting me, has anybody else?

“When you are doing corporate events people end up having a few. They’re a bit tipsy but you have to remain professional at all times.”

Professional mermaids first found fame in 1959 at Weeki Wachee Springs underwater theatre in Florida, US. It was turned into a water park in 1982 and the mermaids still perform shows three times a day.

The profession really took off in the 2000s, with many taking to YouTube and social media to show off their skills. 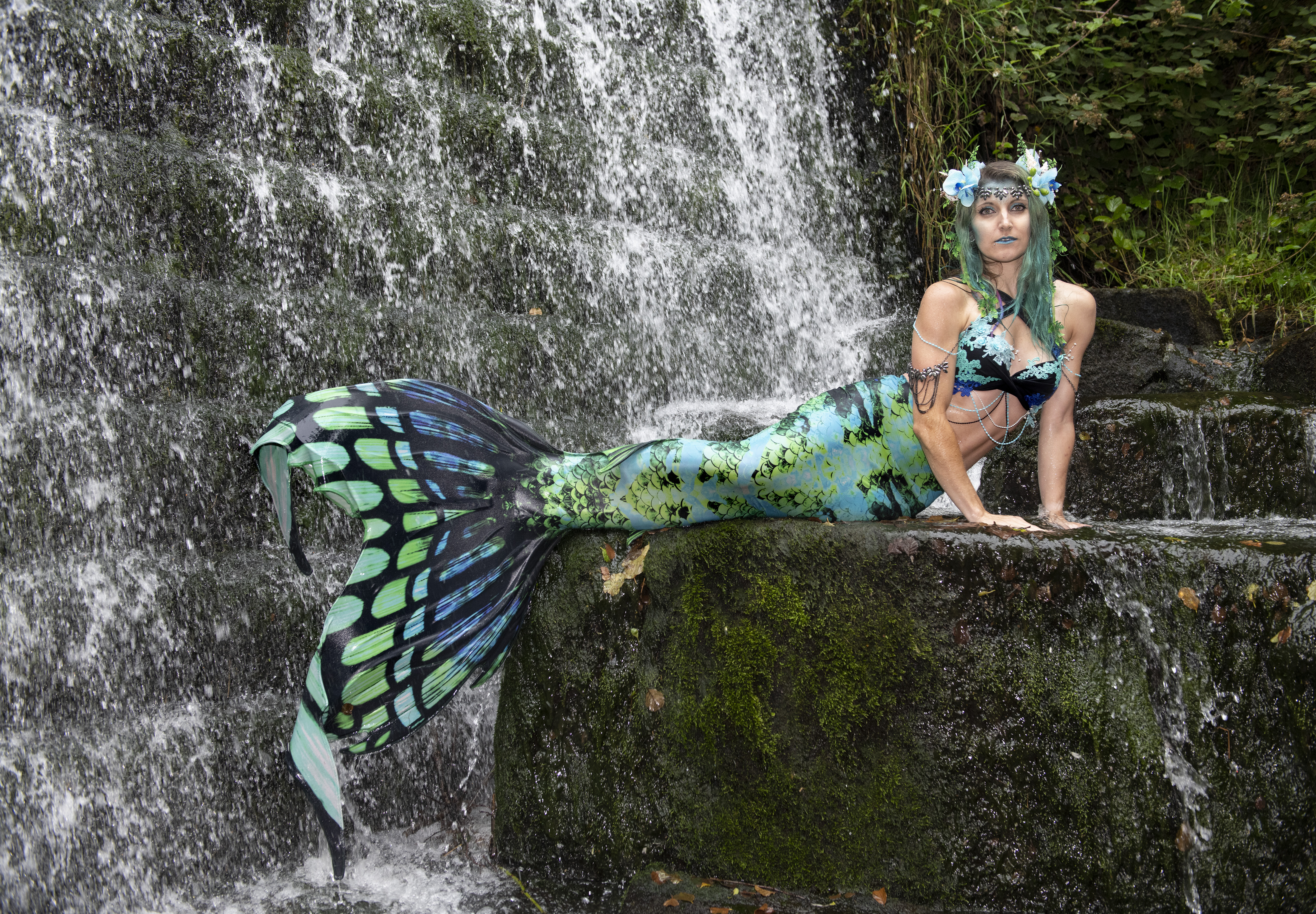 One of the UK’s first mermaid schools, Hire A Mermaid UK, opened in 2014 and offers mermaids for parties. Mermaid Twinkle, Laura Tide-Swell and Athena Storm work for the company owned by qualified freediver Grace Page.

Before lockdown, Grace invested in a transportable tank for her mermaids but has not had a chance to use it yet.

She says: “It’s a huge relief that swimming pools are reopening as I’m hoping this will mean our mermaids can get back to training, and hopefully children’s party bookings will follow soon after. 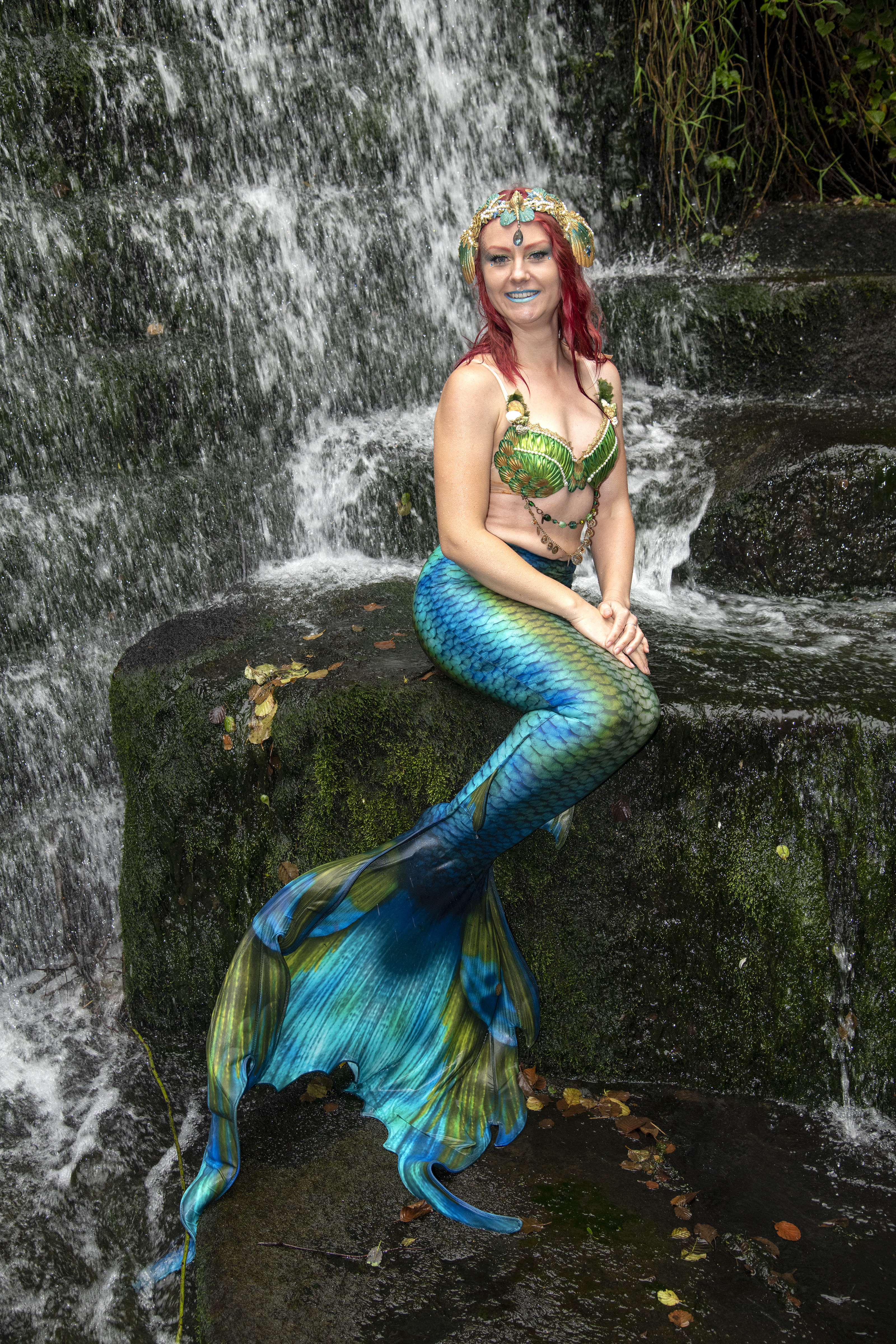 “I am slightly worried that numbers restrictions might mean that private bookings may be further delayed.

"But we are keen to work directly with pools local to our mermaids so we can offer special deals for parents.”

When parties and performances took a dive during lockdown, the mermaids whiled away their time by doing video calls for kids cooped up inside on their birthday.

Yasmin says: “If I knew a child had had a birthday party cancelled I would do a video call in full costume especially for them.

It is much more difficult to swim with legs

Mermaid Twinkle, Laura Tide-Swell and Athena Storm formed a social bubble together and even went wild swimming in their gear once lockdown eased.

Laura says: “Now I am back in water I miss it if I am not in tail.

“It is much more difficult to swim with legs because with a fin you get the propulsion and, of course, I have been training with it for so long now."

Slowly but surely, the mermaids have even seen enquiries start to trickle in as Britain gets back to normal. 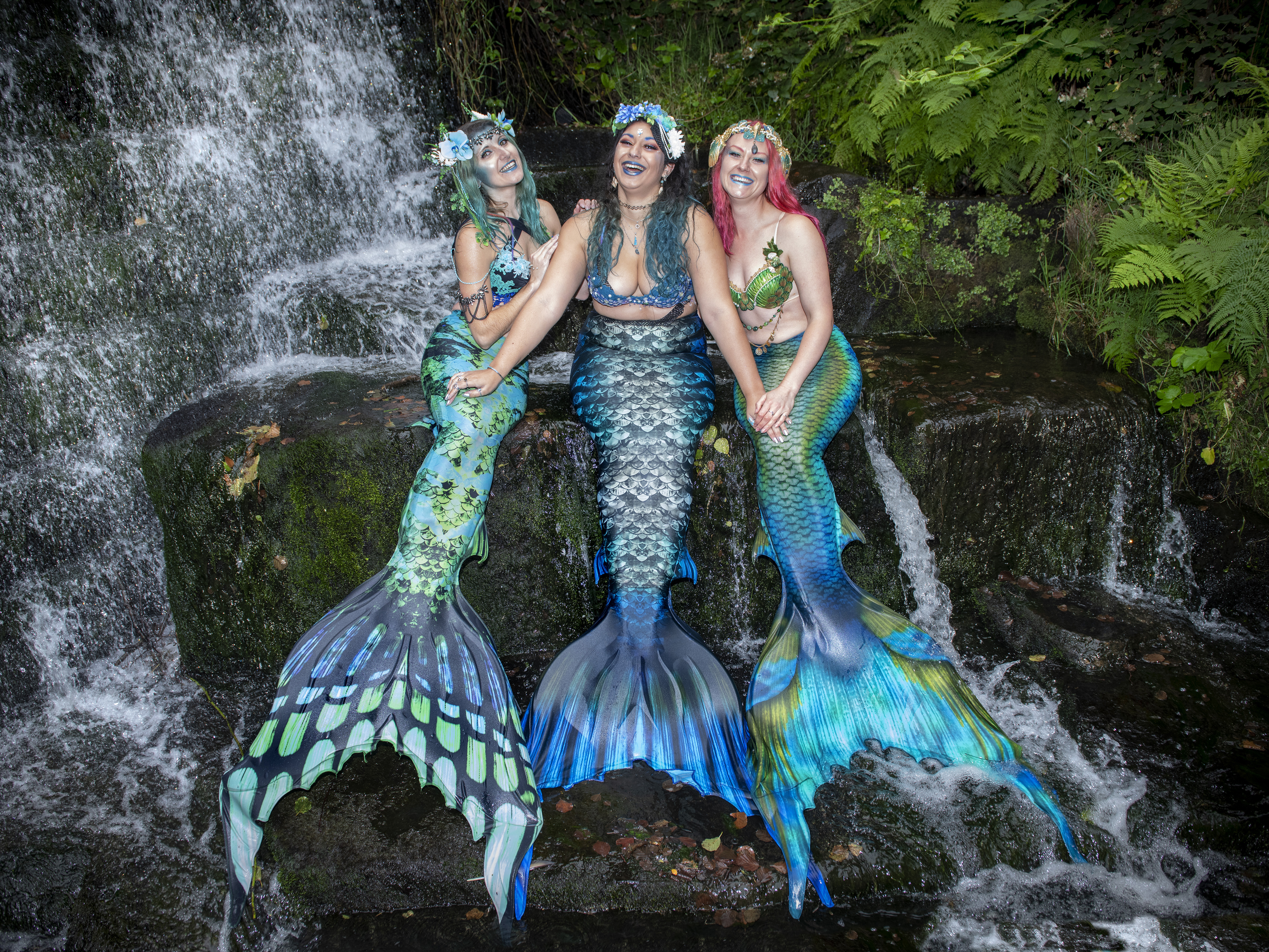 “It’s going to be amazing to have a mermaid at a party, especially for a lot of kids who haven’t been in school or seen their friends.

“They need that magic again.”