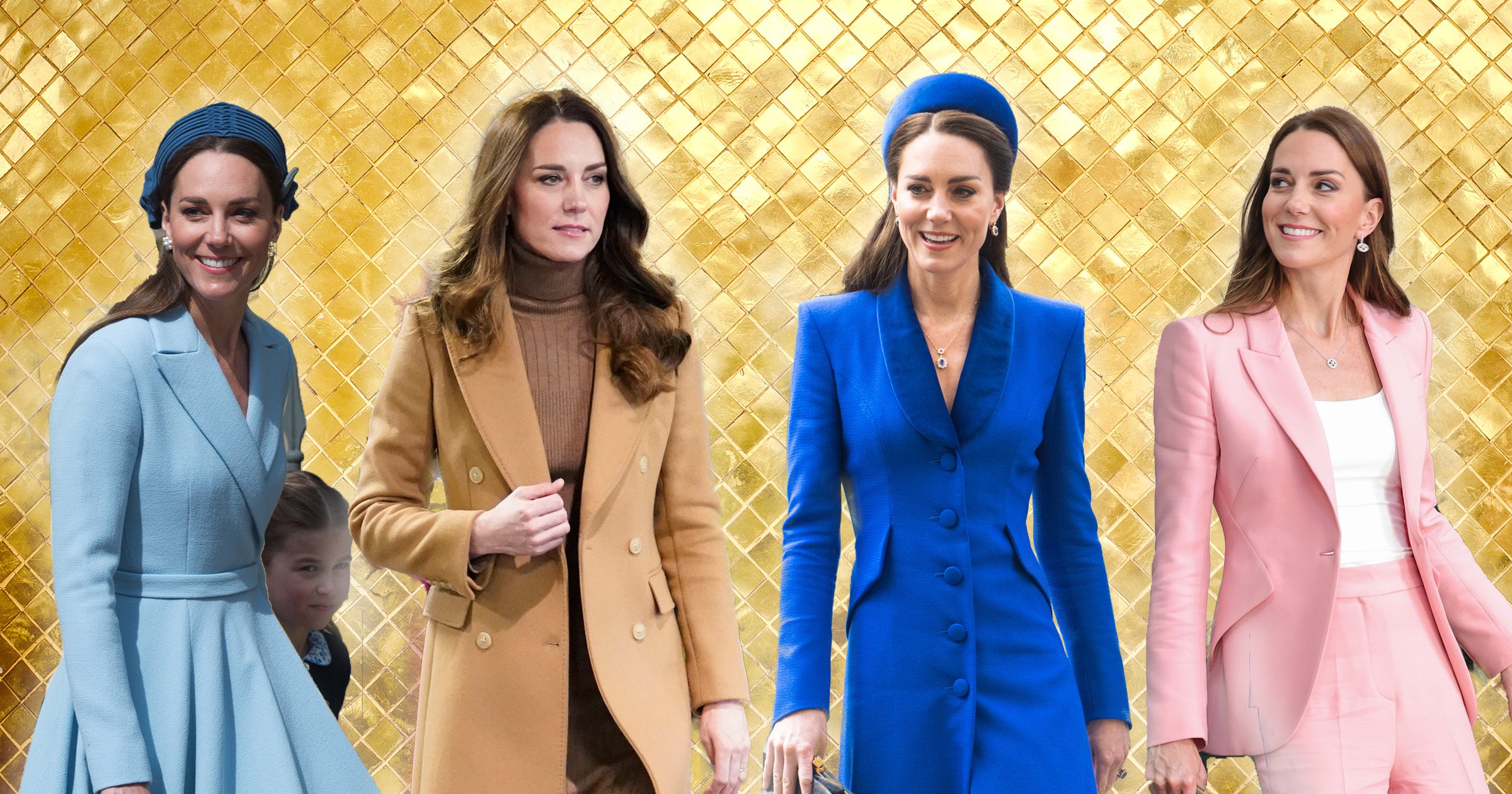 It’s been a big year for the Royal Family, from the death of Queen Elizabeth II at age 96 to the explosive Harry and Meghan documentary release on Netflix.

One thing that remains a constant, however, is Kate Middleton’s impeccable sense of style.

Despite having to adhere to royal conventions, the Princess of Wales is able to add her own flair to every outfit, whether it’s a balloon sleeve, an exaggerated collar, or a pop of offbeat colour.

Over the years, Kate’s style has evolved with her, and she now has a list of favourite designers she can call on for bespoke pieces.

She tends to favour British brands like Catherine Walker and Alexander McQueen, but also surprises with high street buys and vintage finds from time to time.

So with the New Year close on the horizon, we’ve rounded up our favourite Kate Middleton looks from 2022, that set the agenda when it comes to fashion.

On a visit to Lancashire in January, Kate wowed in a Massimo Dutti cashmere camel coat, pairing with Saint Laurent suede knee-high boots worth £1,329.

The top and skirt, in a tonal neutral shade, were by Iris and Ink.

Known for her impressive collection of coats, the then-Duchess of Cambridge sported this chic Sportmax coat on a trip to Blaenavon Heritage Centre.

For the Commonwealth Day Service at Westminster Abbey in March, her bright blue outfit comprised a £3,000 Catherine Walker coat and a bespoke Sean Barrett hat.

Of course, for St Patrick’s Day, the Princess donned Irish green, but switched things up with military detailing and a fun shamrock brooch.

This stunning frock coat is by London-based designer Laura Green, while the Mayfair pillarbox hat was made by Lock & Company milliners.

There were so many stunning outfits from Kate and Wills’ Caribbean tour that it was difficult to choose, but the Jenny Packham dress she donned for her arrival in Belize is a real standou

Another showstopper was this Vampire’s Wife dress, which sold out almost immediately after the Princess of Wales was pictured in it.

At £1,650, it was the perfect sparkly gown for a ceremony held at the Mayan ruins of Cahal Pech in Belize.

The royals know eyes will be on them at certain events, and Kate pulled out the stops for the Easter Sunday church service held at St George’s Chapel.

Catherine positively wowed in a Roland Mouret Lamble Gown at the premier of Top Gun: Maverick in May.

The bardot neckline highlighted her slender shoulders, while the monochrome colourway kept the look classic and timeless.

We loved this pink power suit, which Catherine wore while hosting a roundtable with Government ministers and the Early Years sector.

It’s by one of her favourite fashion houses, Alexander McQueen, and sparked an array of similar options on the high street.

Kate wore the ensemble to Ascot, making best dressed lists across the country.

In September, Queen Elizabeth II passed away, and the Royal Family gathered at Westminster Abbey for the monarch’s State Funeral.

As ever, the Princess kept her look understated yet put-together, wearing an Alexander McQueen coatdress in traditional black.

Even when Kate wears a casual outfit, she still embraces her signature style, as she did on a trip to Northern Ireland in October.

This look typefies Kate Middleton’s aesthetic, and sees a return to the all-over camel hues she favours.

On an official visit to Scarborough, she wore a MAX&Co wool coat and a Gabriela Hearst cashmere-blend turtleneck dress, with matching shoes and accessories (naturally).

One of Catherine’s go-to designers is Emilia Wickstead, and it’s easy to see why with this Miles houndstooth dress she wore to Harvard University in Massachusetts.

For the Earthshot Prize, the royal went green in more ways than one, renting her dress from Hurr.

By Solace London, the gown looked stunning with emerald jewellery, and is still available for hire to keep things sustainable.

Although everyone adored the deep red coat Kate wore to the Together at Christmas carol service this month, we couldn’t help but highlight her outfit during the event’s promotion,

In festive red sequins, it’s Needle and Thread’s Aurora dress, which has previously made an appearance as the Princess likes to re-wear staple pieces.

Last but not least, Kate’s choices while attending the Christmas Day service at Sandringham last week saw her returning to a military-inspired aesthetic.

The dramatic khaki frock coat she chose for church is by Alexander McQueen, while the leather gloves and slouchy suede boots added a countryside charm to the ‘fit.

The Ultra-Comfy Sneakers with a 20,000-Person Waitlist Just Got a Groundbreaking Makeover