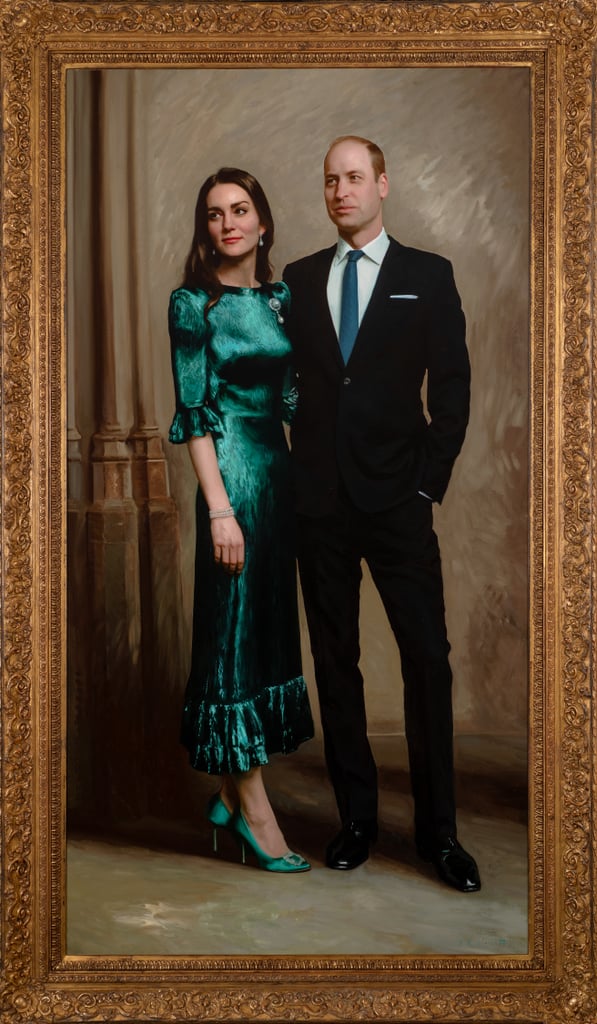 The Duke and Duchess of Cambridge released their first official portrait on Thursday, June 23. Unveiled at the University of Cambridge’s Fitzwilliam Museum in England, the portrait was painted by British artist Jamie Coreth and presents Kate Middleton in a regal emerald-green gown by The Vampire’s Wife and Manolo Blahnik satin pumps in a matching shade.

The Falconetti emerald metallic silk dress exudes the effortless elegance of flappers from the 1920s, and it falls beautifully over Middleton’s frame at the bodice, which extends into a midlength skirt. The three-quarter-length sleeves and hem are both edged with soft ruffles, enhancing the alluring charm of the gown. Middleton first wore it on Saint Patrick’s Day in March 2020 during a trip to Dublin with Prince William, channeling Princess Diana in the most glamorous way. The lustrous design is reminiscent of several green gowns owned by the late princess but most notably the iridescent Graham Wren ball gown she wore to a concert with Prince Charles in 1982 and the scintillating Catherine Walker maxi she donned for the premiere of “The Hunt For Red October” in 1990.

Princess Diana’s style moments are an endless source of inspiration for Middleton, who frequently pays homage to her late mother-in-law by way of sophisticated ensembles. In fact, she gave a nod to the Princess of Wales just this week in a pink suit by Catherine Walker and later in her go-to white Alexander McQueen suit and gilded earrings.

The Duchess of Cambridge embellished her portrait ensemble with a trio of pearl bracelets, pearl drop earrings, and a pearl broach over her heart. Her wavy hair cascaded past her shoulders as she looked slightly to the right for the portrait.

Ahead, appreciate the artwork, and shop the exact dress and pumps Middleton wore.