Kris Jenner just proved why she’s the OG style queen in her family. The 65-year-old matriarch turned heads in a sumptuous bubblegum pink suit by designer of the moment Dolce & Gabbana in New York City on Saturday, Sept. 11. The self-proclaimed momager had handsome boyfriend Corey Gamble, 40, on her arm as the pair made their way to longtime family friend Paris Hilton and Carter Reum‘s engagement party.

She paired the silk organza blazer and trouser with a nude bodysuit, likely from daughter Kim Kardashian‘s popular shape and loungewear line SKIMS. Kris added a dash of glitz with one of luxury label Bvlgari’s iconic Serpanti diamond necklaces around her neck and a large pair of diamond stud earrings. The Keeping Up With The Kardashians star finished her look with a matching pair of pink pumps, as well as a glittery silver handbag, also by D&G. 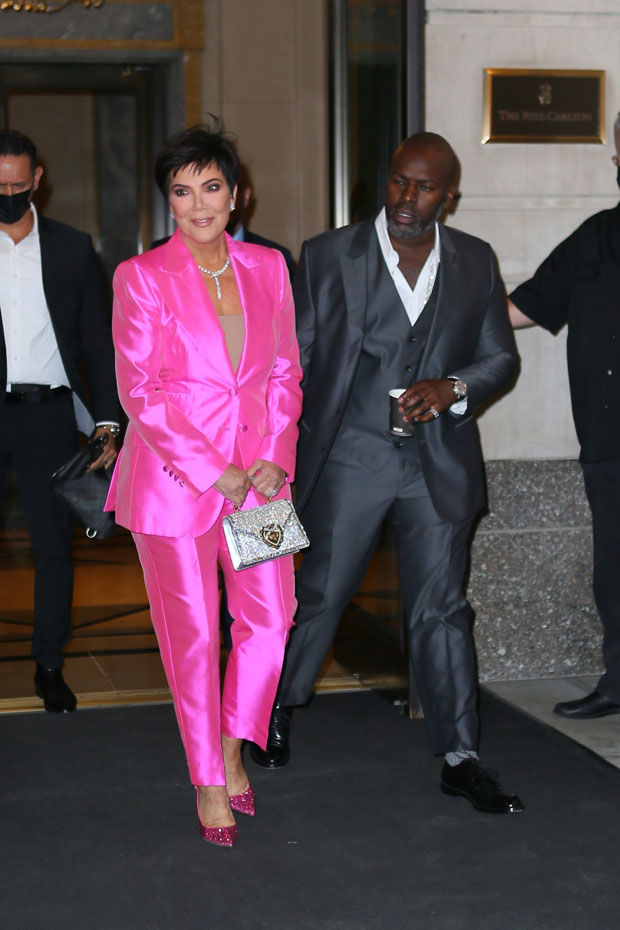 Corey, who works with music manager Scooter Braun, twinned with Kris in a suit of his own. The 40-year-old went with a dark charcoal gray ensemble consisting of a blazer, vest and trousers. He added a crisp white shirt underneath, opting to ditch a bowtie. A diamond chain appeared to poke out of his blazer, along with a luxe steel watch on his left wrist.

Kris also took to Instagram to share her cool look, tagging her glam squad which included Etienne Ortega for makeup and Lea Journo for hair. “What a beautiful night, New York!” she captioned her photo, which showed a closeup look of her pink and rose gold hued eyeshadow and luscious black lashes.

The mom-of-six has been on a serious Dolce & Gabbana kick since attending their star-studded Venice Film Festival event two weeks ago. Kris looked sensational in a black sequin gown for evening one of the three day event, which she also attended with Corey. She’s been regularly sporting the label’s current collection in recent weeks, including a form fitting floral dress in Portofino, as well as a graffiti inspired ensemble which she shared on her Instagram.