Royals including Princess Kate, Princess Eugenie and Meghan Markle were seen wearing gloves. While this accessory isn’t compulsory at a state event, there’s every chance they were chosen as a nod to the late Queen, who was always seen with her signature white gloves.

WATCH: Prince George and Princess Charlotte walk between their parents at funeral

Another reason for sporting gloves could be the change in season, as the autumnal weather draws in. Either way, we think the royal ladies looked very elegant.

Princess Kate wasn’t pictured with her gloves on, but she did carry them in her hands, alongside her clutch bag. The royal wore an Alexander McQueen dress for the state occasion. She added a wide-brimmed hat that came complete with a subtle veil. 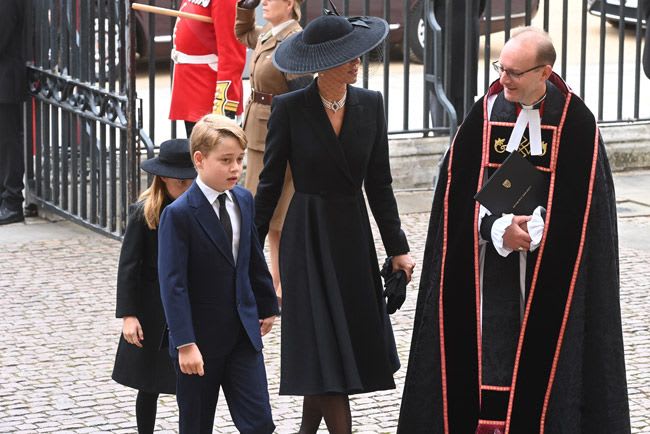 Kate was seen with her gloves in hand

The Queen Consort also held a pair of black gloves in her hand as she was photographed entering and leaving Westminster Abbey.

MORE: The Queen beams in poignant final portrait released ahead of state funeral

Princesses Eugenie and Beatrice followed suit and donned black gloves for the occasion with their sombre outfits.

The Duchess of Sussex teamed her cape black dress with long black gloves, creating a statement silhouette. The royal slicked her raven hair into a graceful chignon, coiled beneath a wide-brimmed oval hat that perched, tilted on the right side of her head, and she also wore a pair of pearl earrings, which were gifted by the Queen. 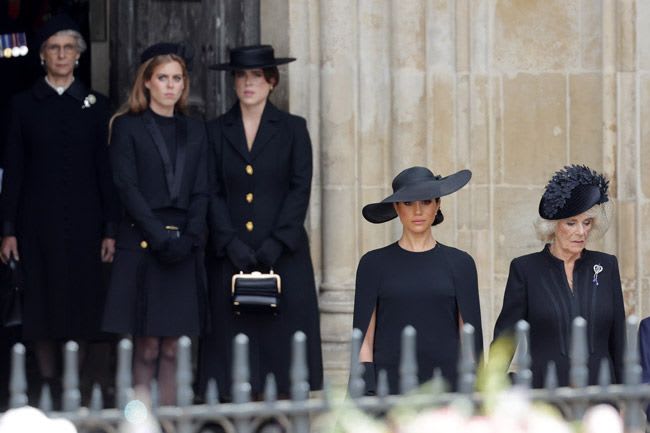 The royal family put on a united front for the sombre occasion, which saw the Queen’s heartbroken children King Charles III, Prince Edward, Prince Andrew and Princess Anne, and her grandchildren Prince William, Prince Harry and Peter Phillips, walk behind the coffin as part of the funeral procession.

While the whole world mourned during the funeral, there will be a private service with senior members of the royal family this evening, which will not be televised.