It takes a lot to offend people in fashion, where rats have roamed the runway and John Galliano once called a Dior collection Haute Homeless, but Ye succeeded with an off-schedule show at Paris Fashion Week, featuring T-shirts with images of Pope John Paul II on the front and the hate speech slogan “White Lives Matter” on the back.

Accompanying the image of the popular pontiff was the Spanish text “Seguiremos tu ejemplo”, which translates to “We will follow your example” but the rapper, formerly known as Kanye West, turned-designer and occasional host of spiritual gatherings, was not looking for guidance. 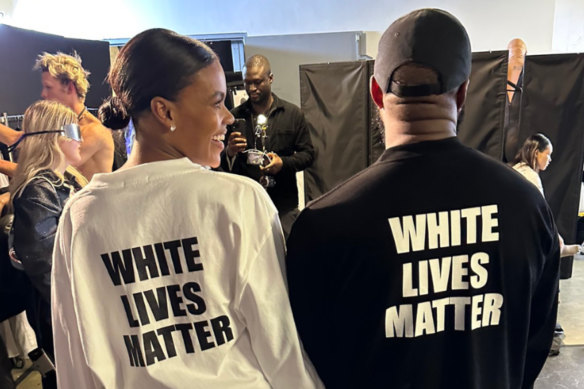 “I am Ye, and everyone knows I am the leader,” he said, in a six-minute introduction to the show for his label Yeezy, held in an empty office building near the Arc de Triomphe. Ye was wearing a shirt with the inflammatory White Lives Matter slogan, which has been used by the Ku Klux Klan.

Not everyone was willing to follow, except perhaps guest of honour Candace Owens, a US conservative commentator who last month referred to Ye’s ex-wife Kim Kardashian on a podcast as “a prostitute.” Actor Jaden Smith and British fashion journalist Lynette Nylander walked out of the show, attended by Galliano, Balenciaga designer Demna and US Vogue editor Anna Wintour.

When Vogue editor Gabriella Karefa-Johnson wrote on Instagram, “The t-shirts this man conceived, produced, and shared with the world are pure violence. There is no excuse, there is no art here,” the pile-on really began. First Ye attacked Karefa-Johnson’s credibility before supermodel Gigi Hadid leapt to her digital defence.

“You wish u had a percentage of her intellect,” Hadid posted on Ye’s Instagram account, before deleting the response. “You’re a bully and a joke.”

A series of defensive posts from Ye, who was diagnosed with bipolar disorder after being hospitalised for a psychiatric emergency in 2016, followed. “Everyone knows that Black Lives Matter was a scam,” Ye wrote on Instagram stories “Now its over. You’re welcome.”

There was also a disturbing post inferring that Bernard Arnault, the billionaire chief executive of the LVMH conglomerate, “killed” Virgil Abloh, the Louis Vuitton menswear designer who died of cancer last year.

Support for Ye is thinner than most models at Paris Fashion Week, with Supreme creative director Tremaine Emory questioning the rapper’s motivations.

“I gotta draw the line at you using Virgil’s death in your ‘ye’ is the victim campaign in front your sycophant peanut algorithm gallery,” he posted on Instagram.

“Your best friend Virgil, NEGRO PLEASE , this time last year you said Virgil’s designs are a disgrace to the black community infont of all your employees at yeezy.”

As for the clothes? No one has time to talk about the catsuits, ponchos and lumpy sweaters, which many compared to Ye’s partnership with US retailer Gap, which was terminated two weeks ago.

“While we share a vision of bringing high-quality, trend-forward, utilitarian design to all people through unique omni experiences with Yeezy Gap, how we work together to deliver this vision is not aligned,” Gap brand president, Mark Breitbard, wrote to employees. “And we are deciding to wind down the partnership.”

Winding down Ye himself is much harder.