Sugar Bones, who fronts Confidence Man with Janet Planet, enjoys the skyrocketing global hype, but says there’s a far simpler idea at play with the group. 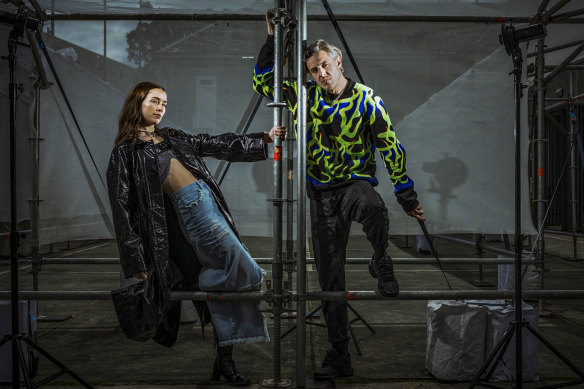 Janet Planet and Sugar Bones are heading back overseas for sold-out shows with Confidence Man.Credit:Chris Hopkins

“We want to get people moving, get people smiling,” he says. “It’s about letting people find their inner cool. Everyone has it in them, we’re the vessel to let people get there.”

“Don’t overthink it,” says Janet Planet who, like Sugar Bones, adopted a pseudonym when the band formed in Brisbane six years ago. A quick internet search will reveal their actual names, but Bones and Planet prefer remaining in character when discussing the group’s music, and its philosophy.

Like the group’s elaborate costumes, choreographed dance moves and party-time attitude, their pseudonyms add to the overall sense of escapism at the heart of Confidence Man.

Along with keyboardist Reggie Goodchild and drummer Clarence McGuffie, who also adopted stage names, the group relocated to Melbourne after debut album Confident Music for Confident People was released. During the COVID-19 lockdowns they recorded breakthrough second album Tilt in various rooms of the Thornbury house they shared.

“Just to get out and see live music again, everyone was so thirsty for it.”

“It was a bit annoying for our neighbours, but it helped us get through the lockdowns,” Bones said. “It was such a blessing to have a project to work on … it gave us a sense of purpose.

“We headed off the moment we could after lockdowns, picking up the UK and Europe tours that had been delayed for two years. It was super invigorating, to dust of the cobwebs and see crowds again.”

On stage, Goodchild and McGuffie perform in dark costumes and veils that hide their identity, while Bones and Planet revel in the spotlight. Planet also designs the group’s costumes.

“It’s definitely a melting pot of our different strengths … and we’ve really grown into those strengths,” she says.

Their high-energy, dynamic show is all about fun. Packed festival appearances this year are proof audiences here and overseas want more – and to forget their worries, even for a little while.

“It felt so good for us, as performers, to get out and perform again, and it’s the same for crowds,” Bones said. “Just to get out and see live music again, everyone was so thirsty for it.”

Adopting stage names and creating a little mystery has been a winning formula, but Confidence Man also share a long history together, from playing in other bands to family ties.

“We played in a few other bands, sometimes together … and they were a bit visual, but nothing like Con Man. Once Confidence Man became a band, it went to a whole new level,” Bones said.

Soon after a euphoric performance at Glastonbury in June, their sugary hit Holiday was playlisted on BBC Radio 1 and ever since it’s been one high after another. Tame Impala’s Kevin Parker reached out to remix Holiday on new EP Re-Tilt, and the group’s upcoming UK tour sold out so quickly, Planet thought their website was broken.

“I thought something was wrong … we were calling people, asking what’s going on,” she said.

“We’ve been working towards this point for six years,” Bones says, adding “when the tickets sold out, we really couldn’t believe it.”

“We really wanted to do a remix album, and hit up a list of different artists and got really lucky with a bunch of our favourites,” Bones said.

“Out of nowhere Kevin from Tame Impala hit us up on Instagram … it’s so good to have someone you’ve always loved in music having a hand in your work. It rounded out the EP perfectly.”

Confidence Man are part of this month’s national Grapevine festival. Re-Tilt is out now.