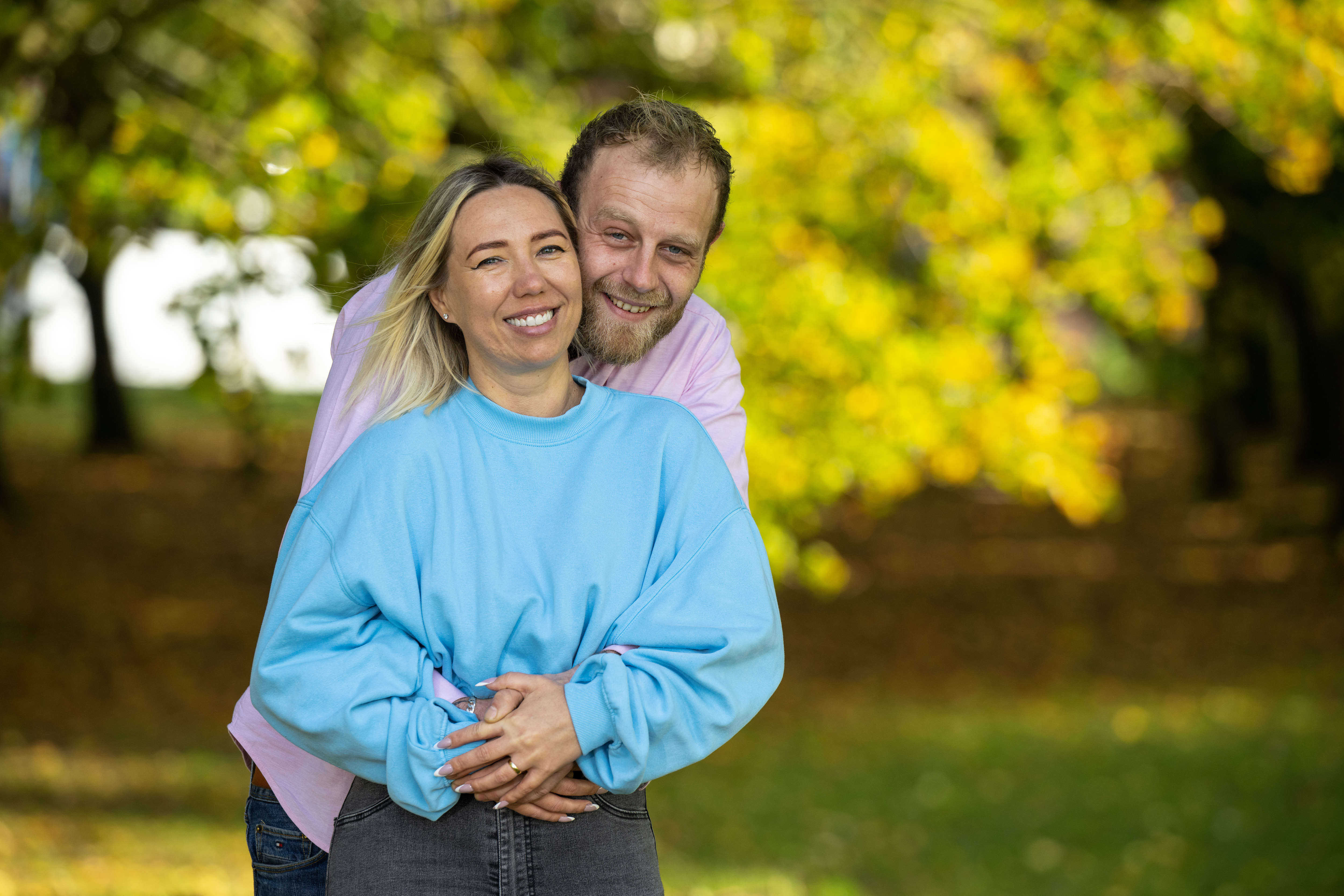 After learning of the war in Ukraine, Luke Dickinson joined a Facebook group set up to help those fleeing.

He got chatting to fellow group member, Vira Klimova, who had left her home in Odessa, Ukraine, with her daughter, Karina, 15.

The pair used Google Translate to chat and soon, a surprise romance blossomed.

Within weeks of Vira’s arrival in the UK, the pair became an item and, less than three months after their first date, they got married.

The newlyweds say their relationship is the only good thing to have come out President Vladimir Putin’s attacks on Vira’s home country.

Luke, 28, from Bristol, said: ‘There is something good that has come out of it for us.

‘If it hadn’t happened, we’d never have met, it’s as simple as that.’

On February 24, Vira, 37, came home from her job as an accountant at a law firm in Odessa to find her flat wrecked as Russian forces invaded.

She gathered a single carrier bag full of belongings and fled with teenage Karina.

It took mother and daughter weeks to travel across Europe, initially driving into Moldova before making it to Budapest in Hungary and then onto Holland.

Families on the way showed the pair such kindness, offering them places to stay and food as well as friendship for the short time they were there.

When she got to Holland, Vira was able to choose between continuing on to Australia, Canada or the UK.

She had a Moldovan friend who had moved to Bristol to work and so chose the southwest city as her base after he offered to be her sponsor.

However, while traversing Europe, Vira began talking to Luke in the Facebook group.

Shopfitter Luke, explained: ‘The groups were for people trying to get out of Ukraine, to England, looking for help and advice or just someone to talk to.

‘When we got chatting Vira was already sorted and had her documents ready.

‘But I’d seen her photo and I was like ‘Ooh hello!’

‘So, I sent her a private message.’

The pair began chatting whenever they could, sometimes setting aside an hour a day to text while Vira waited to be approved to travel to Britain.

‘I didn’t really think it was going to go anywhere as she was halfway across Europe,’ Luke said. ‘Then she said she was coming over to England.

‘We used Google Translate on every single message as she didn’t understand any English. I really liked her, so it didn’t matter.’

Vira and Karina arrived in Britain on April 6 where she moved in with her sponsor.

She immediately began taking English lessons, learning to drive and is also converting her Ukrainian accountancy qualifications so she can work in the UK.

Luke invited her round his house on July 3, saying he was super nervous about it.

‘I asked her if she fancied a drink in my hot tub as our first date,’ Luke joked.

‘At this point I was thinking I fancied her but we’d see what happened, and whether anything developed.

‘By this point she spoke a little English. We’d be trying to have a conversation, it was all in English, and if she didn’t understand something I’d just get Google Translate out.

‘If she didn’t know how to say something she’d do the same.

‘It was a really strong initial attraction, for her as well. She stayed the night, and I was late going in the next day.”

After their first date, the pair were inseparable, going on another date in Bristol that weekend.

They also enjoyed trips to London and Weymouth – and Vira wanted to see Stonehenge.

Luke admitted he was smitten straight away.

‘I knew I wanted to marry her after two weeks,’ he said. ‘It’s a cliche but we just clicked and that was it.

‘We both agreed that we both wanted to do it and do it now. We didn’t want to wait.’

He popped the question on a visit to London on August 23 as they enjoyed steak at a restaurant near Tower Bridge – and Vira didn’t hesitate in saying yes.

The pair married at Bristol Register Office on September 30, followed by a reception at cocktail bar the Library.

Vira gave a speech in both English and Ukrainian in recognition of her homeland.

And Luke says that while she wanted a traditional English wedding, touches of her heritage are apparent in their everyday lives.

She loves to cook Luke Borscht – a Ukrainian speciality that is basically beetroot soup. The pair also watched the Ukrainian band that won Eurovision perform in Bristol, while Luke is learning Vira’s language.

But there have been some low points. Luke says Vira is always upset about the ongoing war in Ukraine. Tragically, some of her friends have also been killed in the conflict.

Luke explained: ‘She feels upset every day about what’s happening to her home.

‘Friends have died and been injured, her home is gone.

‘It’s her hope one day that she’ll be able to take me back to Ukraine and I can’t wait.’

Vira has three sisters and while two are now safely in Poland with her mother, one is still living in an occupied village in Ukraine.

Her two brothers were also caught by Russians at the start of the war but have since escaped.

The couple now hope to have children and although Vira is still living with her sponsor, she plans to move in with Luke in December.

The pair hope to be able to have a second wedding back in Ukraine one day.

And the pair have managed to improve their communication since the early days of Google Translate.

He added: ‘At the moment we do half English and half Ukrainian.

‘We don’t really use Translate at all anymore.’

Vira said: ‘I can’t believe how lucky I am coming from a war and having to leave my home and ending up finding the one man for me.

‘We both knew straight away we are meant to be.’

Casey Anthony Plans Her Own Reality Show, Compares Herself To The Kardashians